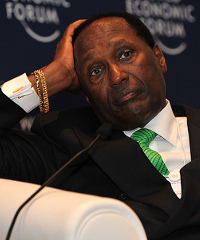 One of the sectors on which Kirubi would like to focus more is agriculture. Kirubi told How we made it in Africa that farming is a critical sector in Africa at a time when the population is growing rapidly and agricultural productivity is falling.

“[Some] of the things this [continent] is crying for is food, water and protection of environment. We must feed people. The population is growing at an alarming rate [while] agricultural productivity is going down because most land is being used for settlement.”

According to Kirubi, to counter this imbalance, Africa needs to use “scientific methods to increase productivity”.

“I believe I have a role to feed Africa and to demonstrate to other people [that farming] is not a business for the uneducated and the old in the rural areas. It is something very critical because everybody must eat,” said Kirubi.

He added that food should be available at the most affordable prices and accessible to the very poor.

“I am already farming. I have a big coffee farm. It is a challenge because of international price fluctuations but we have to gain some access to international markets and we must bring foreign currency to this nation of ours. So, this is one of the cash crops that we must find a way to farm in an efficient manner.”

During this year’s World Economic Forum on Africa held in May in Cape Town, South Africa, Kirubi criticised the relationship between African farmers and the Western markets to which produce like tea, coffee and horticulture is exported. This, he said, has “institutionalised African farmers to remain poor”.

“I like to classify farming as modern slavery that continues in Africa because people labour for so little, if at all anything… we know access of processed African products to the Western world, America and the lot, is almost impossible and also even fresh products, you have to buy so many chemicals from the developed countries in order to comply with their changing rules of the game… and the chemical producers make more money than the farmer exporting the products to their countries,” Kirubi said at the conference.

Africa to feed itself

Speaking to How we made it in Africa this week, Kirubi explained that Africa should not only focus on international markets; feeding local populations should also be a priority.

“We have just got to find equity in market access. We also need to feed our own people in the domestic market. We have to grow our own rice. We don’t have to import rice from Pakistan, India and China. These people have their own huge populations to feed. One day they could say there is no more rice exports to you. What shall we feed with?

“It is important for us, with the amount of land available, to really use technology, to utilise marginal lands and find better methods of farming and to do things in a modern way.”

Youth involvement in farming is low in most countries in Africa despite high levels of unemployment. Kirubi advised Africa’s educated youth who favour office jobs over farming to relook at the industry. He said there are numerous opportunities in the sector, from planting to value addition.

“Simply you have got the wrong education and you have the wrong profile of what farming is all about. Farming is not an imaginary business. It is the most important business,” he said. “We must all support farming and we must look at value addition so that people can earn better incomes from their produce.”