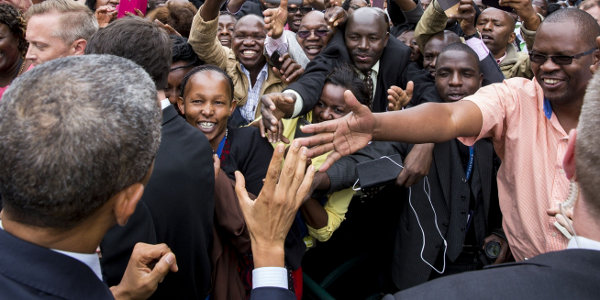 US President Barack Obama during his visit to Kenya in July 2015.

As US president Barack Obama’s term ticks down, he has been keen to highlight his legacy. This includes his achievements in Africa, where his father hailed from.

Speaking recently to an audience that included African heads of state, Obama said his administration was doing more business with the region through initiatives such as Trade Africa and Power Africa.

That said, Obama emphasised that the bilateral relationship was only just scratching the surface and urged for more mutual trade.

“The fact is that, despite significant growth in much of the continent, Africa’s entire GDP is still only about the GDP of France,” he claimed.

Could the gross domestic product in Africa, a continent of 55 recognised states, be only as much as that of one country? We sought to find out.

Gross domestic product (GDP) measures the market value of final goods and services (those that are bought by the final user) produced in a country in a given period.

Africa Check was unable to get official comment from the White House as to which sources Obama used to compare the GDP of Africa and France.

Because an economy’s output can be measured in various ways, the United Nations came up with the System of National Accounts after the Second World War. This was meant to harmonise GDP standards, with the fourth and latest version released in 2008.

Despite routine reviews by the World Bank to ensure compliance, “significant discrepancies remain between international standards and actual practice”, the bank says in the explanatory notes for its GDP data.

In Africa, these are caused by severe shortages in the resources, training and budgets of national statistical offices and large uncaptured sections of economies, among other reasons.

Furthermore, only seven African countries currently report economic data that is compliant with the 2008 System of National Accounts standard. Eleven are still using the second version from 1968.

This means that GDP estimates for most African countries are weak “with large plus minus errors”, Morten Jerven, an economist at the Norwegian University of Life Sciences and at Canada’s Simon Fraser University, told Africa Check. Among Jerven’s publications is the 2013 book Poor Numbers: How We Are Misled by African Development Statistics and What to Do About It.

Jerven said that due to the weakness of data, “we should do much less of this ‘biggest’ and ‘smallest’ and so forth”.

Data for Africa not always current

The Bureau of Economic Analysis in the US states that the usual practice, whenever possible, is to value GDP at current market prices, using the US dollar to facilitate comparisons. Using market values also helps gauge the impact of government programmes or occurrences such as natural disasters on the economy.

But the challenge of calculating a combined GDP for Africa is that the data is not always current, postdoctoral fellow at Harvard University’s Centre for African Studies, Grieve Chelwa, told Africa Check.

In 2015, the combined GDP of African countries was $2.24tn according to the World Bank, but data for seven countries in the region was not yet available. In 2014, when there is data for 53 African countries (excluding Eritrea), their cumulative GDP was $2.74tn.

However, World Bank statistician Mizuki Yamanaka told Africa Check that market rates do no reflect the cost of living when the economic output of different countries is compared.

Chelwa explained that market rates fall short for many reasons. This includes when governments meddle with an economy (such as in China) and when goods and services that are not traded but consumed domestically (such as haircuts) form a large part of the economy.

“The [South African] rand value [of a Big Mac burger] that you would get by simply looking up the market exchange rate between the rand and the dollar would be misleading,” he said.

In a 2009 paper for the National Bureau of Economic Research, a private not-for-profit research organisation in the US, Nobel laureate Angus Deaton and University of Pennsylvania scholar Alan Heston discussed the difficulties associated with purchasing power parities.

But despite its weakness, an independent evaluation, commissioned by the United Nations Statistical Commission in 1998, concluded that there is no alternative to purchasing power parity data for comparing economies or to measure poverty at the global level.

For 2014, when the International Comparison Programme has data for 52 African countries; their combined tally was $5.35tn. In the same year, France’s GDP adjusted for local purchasing power $2.66tn, close to its figure at current prices.

No single measure ideal for all purposes

But again, not so quick. Context matters, the experts told Africa Check.

Jerven said: “If you were to compare the total GDP of two countries to say something about the sheer economic strength in the area, you might not adjust the GDP estimates with purchasing power parity but compare the current cash value.”

“That would reflect the purchasing power of the GDP in the world market – if you are buying oil or fighter jets.”

“Measuring and comparing economies is a methodologically challenging undertaking, known as the ‘index number problem’. There is no single measure that is ideal for all purposes.

“Current price GDP as Obama used is the most appropriate measure if, for instance, one wants to get a sense of relative size of the market from a business perspective.”

There are two main ways to compare the GDPs of countries: converting the current GDP market value to US dollars (GDP at market prices) or adjusting the GDP to take into account buying power differences (GDP at purchasing power parity).

However, the challenge in comparing different economies using current prices is that large differences in buying power can lead to misleading results. The use of an international indicator that calculates the buying power of different currencies attempts to overcome this, even though it also has its shortcomings.

However, analysts said that in the context of countries’ broad ability to trade in the world market, GDP at market prices is more appropriate for comparing economies.

This report was originally published by Africa Check. Africa Check is a non-partisan organisation which promotes accuracy in public debate and the media. Twitter @AfricaCheck and www.africacheck.org.