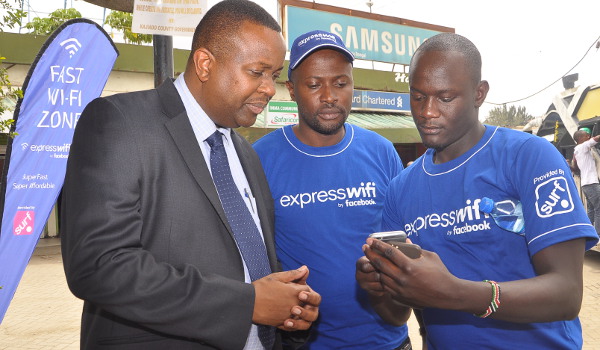 Facebook recently launched its Express Wi-Fi initiative in Nairobi, Kenya, in partnership with local internet service provider Surf (a subsidiary of US-based broadband provider EveryLayer). The offering – which the social media giant has also rolled out in India – allows consumers to access affordable wifi from hotspots.

According to Mark Summer, Surf CEO, the Kenyan company has already installed over of 100 Express Wi-Fi hotspots in several communities in the greater Nairobi area. And with the official launch of the product, the wifi service will now also be available in Kisumu and Mombasa.

Summer noted that Surf attracted the attention of Facebook because of its experience in the market and strong focus on wifi hotspots and affordable internet. In addition to its partnership with Facebook, Surf also has its own established wifi hotspot solution, called Surfspot. “We are extremely focused on a market segment that [Facebook is] also focused on. So there is an alignment in goals between Facebook and us in the outcomes we want to see,” the Surf CEO said.

“Currently we offer Surfspot hotspots within Nairobi while we have Express Wi-Fi hotspots located in the outskirts of Nairobi, Mombasa and Kisumi. This geographical differentiation allows us to avoid customer confusion,” Summer explained. “We of course anticipate to have a single uniform hotspot platform in all locations and are working towards that but will need some time to realise that.”

The motivation for Surf’s focus on wifi hotspots is, according to Summer, to offer low-income earners an affordable internet solution.

“You see a lot of internet services are focused on the very high-end of the market, where people have the money to pay like US$50 a month for internet service at home, or have much more disposable income than the majority of Kenyan consumers have actually. And so we have really set out to provide services for that general Kenyan consumer and at price points which are realistic for them,” he said.

Surf’s hotspots are generally hosted by small businesses, such as restaurants or mobile money services agents, who then sell the data bundles to their clients. This strategy will allow Surf to expand to areas without setting up needed amenities beforehand. “So we don’t see ourselves necessarily setting up things from scratch in those locations, but empowering existing entrepreneurs with a new service they can offer to their community,” said Summer.

Surf wants to further increase its presence in rural regions – but is only looking to do so once infrastructure and the availability of entrepreneurs to partner with expands outwards past the typical urban and peri-urban areas.

“We have one model of internet access which is clearly common in emerging markets – mobile operator provided internet access. And that is a very important part and has absolutely its role to play in an emerging [markets] like here where you have little existing infrastructure. But in addition to that users are always looking for other ways [to connect] and service providers are looking for more cost effective ways to provide internet access to users. And that is basically what we are exploring with wifi hotspots,” Summer elaborated.