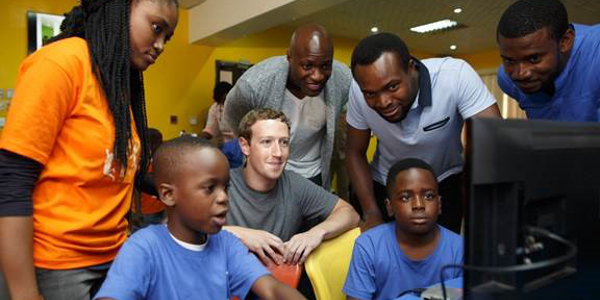 Given that 16 million Nigerians and 5.5 million Kenyans are active users on Facebook as of June 2016, according to the Internet World Statistics website, it is no shock that Zuckerberg would make extraordinary efforts to visit the hotbeds of technological innovation in Africa, where young tech entrepreneurs draw inspiration from the social media mogul’s success.

During his surprise first trip to sub-Saharan Africa, he met with “Afropreneurs” – bright young African entrepreneurs bursting with innovative ideas and a passion for change, who are quickly gaining popularity for using creative means to solve Africa’s problems. Many of these Afropreneurs took his visit as proof that they were making an impact on a global scale. Zuckerberg visited some of the most notable tech centres in Nigeria and Kenya.

Inspired by the ground-breaking success of Kenya’s M-Pesa – the mobile money system that allows users to store money on an account on their phones and make payments via secure text messages – Zuckerberg visited iHub, a Nairobi-based innovation hub for the technology community where entrepreneurs can build and test their ideas.

At the iHub he met with two engineers who had developed a mobile payment system called PayGo Energy that is used for buying cooking gas. According to the Facebook owner, the engineers, Fausto Marcigot and Mark O’Keefe, are an inspiration to the rest of the world in thinking about how mobile money can be used to build businesses and help communities.

In Lagos, Zuckerberg sat down with developers at Andela, a start-up that trains software developers and offers them full-time placement with international companies, to discuss the obstacles faced by African software designers and how to connect the young tech developers to companies around the world. Andela received a US$24m donation from the Chan Zuckerberg Initiative (CZI) in June 2016.

“We live in a world where talent is evenly distributed, but opportunity is not. Andela’s mission is to close that gap,” Zuckerberg said in Lagos.

Since it was founded two years ago, Andela has trained more than 200 engineers selected from a pool of 40,000 applicants. The start-up has pledged to train 100,000 more engineers over the next 10 years, chief executive Jeremy Johnson told Entrepreneur, an America-based business magazine.

“Mark’s visit was a much-needed external validation of the sweat and immense efforts, mostly unsung, of the young Nigerians who have kept at it,” Idris Ayodeji Bello, a Nigerian self-proclaimed Afropreneur, told CNN.

However, not everyone was excited by Zuckerberg’s Africa tour. Some believe he visited to assess his Facebook empire in Africa and promote his business interests, especially since the number of subscribers on the continent increased by a whopping 732.8% between 2010 and 2016, more than any other region during that period.

About 65% of Nigerians who responded to a 2015 survey by GeoPoll, a mobile survey platform, agreed that “Facebook is the internet”.

Also, many pointed to Zuckerberg’s meeting with the Kenyan Cabinet Secretary for Information and Communications, Joseph Mucheru, as evidence of his intention to gain favour for his business venture.

Mariéme Jamme, a Senegalese tech entrepreneur and co-founder of Africa Gathering, a global platform for entrepreneurs to share ideas about development in Africa, wrote on Twitter, “[Mark Zuckerberg] knows [Africa] is all about numbers and access! Please, let’s keep our head high, seek collaboration not validation.”

Critics have also attacked the Chan Zuckerberg Initiative’s Free Basics, a platform designed to provide free internet access on mobile phones to underprivileged communities, arguing that the initiative offers free access only to a select group of websites. They maintain that it violates the core tenet of net neutrality – that internet service providers should enable equal access to content and applications without favouring or blocking websites – in the 23 African countries where it was introduced, including Democratic Republic of the Congo, Kenya, Mauritania, Nigeria and South Africa.

Moreover, if access to free internet is restricted to some websites, critics argue, it may put Facebook in the position of acting as a global gatekeeper, where participating websites must comply with certain “technical specifications” outlined by Facebook, such as for image sizes, applets and font formatting.

Evelyn Namara, a Ugandan techie specialising in youth and entrepreneurship at the African Civil Society for the Information Society (ACSIS), tweeted: “I’m quite frankly not over the moon about his visit because I know of his #freebasics agenda which topples innovation.”

Other critics took offense at Zuckerberg’s flowery talk of the entrepreneurial spirit in Kenya and Nigeria, with the prominent young Kenyan journalist Larry Madowo calling the sentiments “painfully patronising.”

The social media mogul did little to address financing, which entrepreneurs consider their principal challenge. According to the International Finance Corporation (IFC), a member of the World Bank Group, up to eight in 10 small- and medium-size enterprises (SMEs) in Africa lack sufficient funding.

While the jury is still out as to Zuckerberg’s motives for his Africa tour and the impact of his visit, there is no doubt that he successfully captured the Afropreneurial spirit. “[Africa] is where the future is going to be built,” he said firmly.