North Africa specialist Francois Conradie looks at the region’s most important business and politics stories for the month of January 2011. 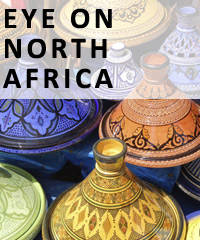 North African news this month was dominated by the uprising that drove long term Tunisian President Zine El-Abidine Ben Ali from power and the similar uprising that followed in Egypt.

Tunisia‘s uprising started as a protest against unemployment and corruption in Sidi Bou Zid in the countryside. When the marches were violently suppressed, Tunisians all over the country reacted with further protests, culminating in a massive march in Tunis on Friday 14 January. Ben Ali ordered his military chief Rachid Ammar to shoot at the massed civilians. When Ammar disobeyed, Ben Ali got on a plane and fled the country. An interim government was forced to resign by similar protests, and the country is scheduled to hold elections in six months.

Similar protests in Egypt started on Tuesday 24 January, increased in size on Friday the 28th and are ongoing. There, too, protesters are insisting that ageing dictator Hosni Mubarak leave.

Tunisian events have hit the stock market hard: the Bourse was closed from the 14th to the 31st and planned IPOs (Tunisie Telecom, Tunisiana and Cotunav) for 2011 will probably be put on hold pending the outcome of a corruption investigation and the election of the country’s first democratic government. In Egypt the benchmark EGX 30 index dropped 21% over the month.

After a slow year for IPOs in Morocco, at least six companies are planning a listing in 2011 including Stroc Industrie, Méditel, Koutoubia and Laboratoires Bottu. Bottu, manufacturer of Morocco’s most popular over-the-counter painkiller, Doliprane, seems the nearest to going to market after it increased its capital.

Libya’s Muammar Gaddafi, initially critical of the uprising in Tunisia, made an about-turn and praised the people of Tunisia, after prudently earmarking US$24 billion for housing projects in Libya to avert the social discontent that turned to political rage in the two countries to his east and west. In Algeria, too, government is taking steps to address the most pressing concerns of its people. The Algerian government bought almost three million tons of wheat in January, pushing up prices on international commodities exchanges. Ditto in Morocco, which heavily subsidises food and gas, and where the government promised to keep staples affordable “at any price” even if a surge in global prices of food and oil have a severe impact on its public finances this year.

With oil hovering around $100 a barrel, this promise may end up being an expensive one for the net energy importer, although there was news on the Moroccan energy front: on 24 January oil and gas explorer Circle Oil announced a gas discovery in its Sebou Permit near Rabat, its second discovery in Morocco this month. Rabat also approved the creation of an agency to speed up its nuclear energy development. Last year authorities said that two 1-gigawatt nuclear reactors would come into operation after 2020 and that the first international tenders for the plants would be launched between 2011 and 2014.

In gas-rich Algeria, the watchword is diversification, and the country is focussing on its potential to generate power from sunlight and wind. The goal was announced to cover 40% of domestic energy needs from renewable sources and to export 2,000 to 3,000 megawatts of solar energy to Europe by 2020.

Germany’s Volkswagen is in talks to invest in Algeria, the second European carmaker to show interest in the North African country after Renault. Renault, which is already present in the Tangier export-processing zone in Morocco, plans an Algerian factory with a capacity of 75,000 cars a year from 2012. Algeria also appointed law firm Shearman & Sterling LLP to advise it on the nationalisation of Orascom Telecom’s local mobile phone unit, Djezzy. Djezzy has been Orascom Telecom’s biggest single source of revenue and uncertainty over its future has complicated a planned $6.6 billion deal with Russia’s Vimpelcom. The Algerian government has right of first refusal on Djezzy and clearly intends to buy the company.

Francois Conradie is the founder of Cape Town-based Meniscus Consulting. Meniscus Consulting is dedicated to facilitating flows of knowledge and understanding through Africa by bridging divides between English, French and Arabic speakers. The company provides political, economic and sector research, business-specific translations and contacts between investors and brokers with a focus on French-speaking North Africa. He can be contacted at [email protected]