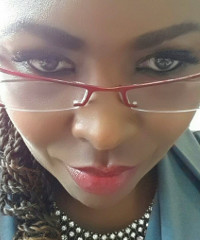 Mutoko is a respected figure in local media and often referred to as the “queen of radio”. She was the first woman to host a morning radio show and controlled the airwaves for 14 years before stepping down last month. She is also the group marketing officer at Radio Africa, a Kenyan media company that runs five radio stations, a TV station and a daily newspaper.

‘When you go to class, you shrink’

In the last two years Mutoko has attended executive education courses at various prestigious schools in the US, including the Harvard Business School and UCLA Anderson School of Management. And although highly respected at home, she says attending classes with even bigger personalities handling bigger budgets was an opportunity for her to be “small” so she could grow again.

“When you go to classes you shrink. You begin to realise how small your world is but how big your potential is. Go to class so you can understand that other people are doing amazing stuff and they are no different from you. Become small so you can grow again,” is her advice.

Mutoko was addressing a group of women entrepreneurs in Nairobi at the launch of the Women Entrepreneurship and Leadership for Africa (WELA) training programme. Organised by the China Europe International Business School (CEIBS), participants will be trained and then join a business study tour to China.

She urges entrepreneurs and senior managers, no matter how accomplished they are, to “stay hungry and stay foolish” if they want to be relevant. Missing out on further learning opportunities, she warns, will limit owners’ and managers’ ability “to see the future” and the potential it holds for their businesses.

“Every time I got on the plane to go to school I understood I was going three years into the future,” says Mutoko. “When I went to Harvard I paid US$9,000 for a 10-day course and it was the best 10 days of my life.”

Gaining a new understanding of how people in their twenties, often referred to as Gen Y, will affect business in coming years was one of her key learnings. She explains that under-thirties make up nearly 2bn of the global population and command trillions of dollars in spending power. They are characteristically group oriented, tend to be idealistic and “they feel extra special”.

“Their mantra is: ‘I want what I want, and want it when I want it, and I want it how I want it, and I want it now’. That is who they are, and if you do not know this about them you should be worried – because they are your future business,” says Mutoko. “If you don’t actively pursue such knowledge to make you truly competitive, to get to the edge of what matters, you will close down your business in a few years.”

Build a network of powerful people

Pursuing executive education also helps one expand their networks. In her class at Harvard, Mutoko says she sat with senior executives from leading US media companies such as CBS and CNN.

Having such a broad network enables business leaders to reach out to powerful people in banking, media and industry and get things done. “What I often see is that when you are on fire, you don’t know who to call because your entire network is not powerful,” she says.

Most would cite lack of time as an excuse to not go back to school. But Mutoko says this can be solved by delegating certain tasks and building a team of supportive people at home and in the office. For most of her career she has held two or three positions at a time.

“I have five people who work nine hours a day and those hours belong to me. So in a day I have 45 hours more than you. Get an amazing personal assistant in the office, get a good house manager, and delegate. You have to understand how to make more hours out of your day,” explains Mutoko. “If I didn’t have a nanny who drives, if I did not sit down with my family and decide what the menu for the week looks like, I would be running around crazy saying there is no time for executive education.”

Although she kept postponing going back to school for a long time, Mutoko says the experiences have been “the most riveting” moments of her career.