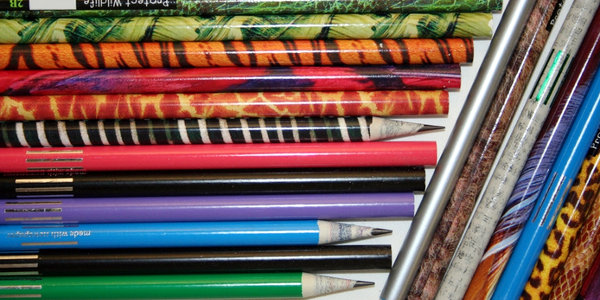 Kenyan entrepreneurs Anthony Kirori and Ivan Ochieng manufacture hundreds of thousands of pencils every year from recycled newspaper at their factory in Nairobi. They co-founded Green Pencils Ltd in 2012 to offer an eco-friendly alternative to wood-based pencils.

“There was also an obvious gap in the industry. Although there is a big market for pencils, Kenya mostly relies on imported products. About 100 million pencils are imported every year,” says Kirori. “By using recycled newspapers we are helping protect the environment by reducing littering and the number of trees being cut to produce wooden pencils.”

At its factory, Green Pencils takes old newspapers through 18 different processes to produce funky, water resistant pencils that it says can last up to three times longer than ordinary pencils. The pencils are sold to schools, corporate firms, government agencies and through a number of retailers. Kirori notes that growth in the education and private sectors is driving overall demand for stationery.

“Some people expected that with the advent of technology we would stop using pencils. But annual global consumption is about 14 billion. Pencils are not going anywhere. There will always be a market. However, how pencils are made should change to reduce pressure on trees – which is why we use recycled newspapers,” says Kirori.

Green Pencils has carved a niche in producing branded pencils used for sales promotions, marketing campaigns or as gifts.

“We are adding value to pencils. Children use them on a daily basis so they present a great opportunity as a communication and marketing tool. Organisations can use them to pass messages to children, and subsequently to their parents. Pencils can be portable billboards in the hands of people you wish to communicate to.”

Rolling with the punches

Kirori says Green Pencils began focusing on schools and corporate clients when it faced hurdles getting on to the shelves of retail stores.

“Getting on to supermarket shelves has been a nightmare,” says Kirori. “By virtue of being the only Kenyan company making pencils locally, we expected supermarkets to embrace us. But we were surprised when they showed us the exit door, and refused to give us orders. But we learned to roll with the punches. We did not close shop, instead figured a way to go round our problems. So we shifted our model to business-to-business, and began working with corporate firms and government.”

Although distribution is also a major challenge, Green Pencils has not written off the mass market.

“We are looking to start selling through small shops once we get a distributor. Pencils are not bulky, so if we find someone already in the distribution business they can do that for us. Unfortunately a distributor we approached recently wanted 60% of the profits. So if we can’t get a distributor who can offer us better terms, our final game plan is to invest in our own distributorship network.”

Green Pencils has diversified into producing pens and is eyeing more opportunities in manufacturing other products using recycled newspaper.

Recently Kirori and Ochieng graduated from the 2015 Green Pioneer Accelerator programme, which seeks to support businesses involved in mitigating the effects of climate change. The programme offers companies support to scale their operations by getting their strategy and financials in shape, and preparing them for fundraising conversations with a network of over 600 investors.

“Next year we will start making crayons, as well as eye pencils used for make-up. There is also opportunity to make road signs. In Kenya road signs are often stolen to resell the metal. Our material is waterproof so we can make road signs no-one will want to steal.”