With the Democratic Republic of Congo’s (DRC) elections scheduled for today, a massive volcanic eruption in the eastern part of the country continues to attract foreign tourists, boosting park revenues and testing the safety and security of a region which, only a few years ago, was considered too unstable and unsafe for even the most adventurous travellers. 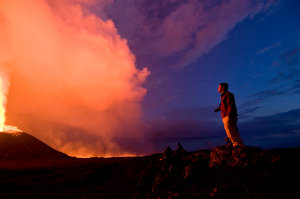 Since early November, Mt Nyamuragira, located in the Virunga National Park, has drawn hundreds of foreign tourists to shell out US$300 per night to trek three hours and sleep less than two kilometres from the volcano’s largest eruption in a century.

As conflict in Goma, the capital of North Kivu Province, has quieted in recent years, Virunga National Park has seen a drastic increase in tourists, showing promising signs for tourism in the region.

Between 2008 and 2009, tourism in the park increased from zero to 550 visitors. Last year, park visits climbed to 1,800, and this year the number is anticipated to be around 3,800. Virunga National Park, which closely borders Rwanda and Uganda, also hosts trips to view endangered mountain gorillas, and climbs to the crater of another active volcano, Mt Nyiragongo where tourists can spend a night looking down into molten lava.

Cai Tjeenk Willink, the park’s business development officer, says that “The good thing is we have high-quality attractions here: the mountain gorillas, the active volcanoes, safaris with elephants, lions and leopards, the lake, a lowland forest and one of the highest mountain ranges in Africa. We have a lot to offer.”

Although most news about the Congo is negative, says Willink, “90% of the messages from the recent news reports [on the volcanic eruption] are positively inclined, benefiting this area.”

Around 60 to 70 foreign tourists per week have trekked to Mt Nyamulagira, according to Willink, although the number is expected to decrease due to safety concerns around the elections.

“It’s a very crucial time in tourism for the Congo…” says Willink, “if there is [election] violence it will bash our operations. We have hope this time the elections will pass without serious incidents.”

While there have been no reported incidents of tourists being attacked inside the park since tourism picked up in 2008, several park rangers have been killed by rebels. Yet according to officials, this has been in the central and northern parts of the vast 8,000 km2 park. Currently, because of these safety concerns, tourists are only allowed in the southern parts, easily accessible from Goma and its neighbouring city of Gisenyi in Rwanda.

“We have a professional security officer, a Belgian ex-military person, who determines the safety, and continually conducts security assessments,” says Willink. Each trek to the volcanoes also includes several armed park rangers, just in case.

The growth in tourism to Goma and Virunga National Park is bringing new business into the local economy, while also significantly boosting park revenues, some of which goes directly into the communities.

The cost of the overnight trek is $300, which includes the $200 park fee and $100 for transportation and lodging. Of the $200 entry permit, 50% goes to the ICCN (Congolese Wildlife Authority), 30% goes to Virunga National Park for infrastructure, roads, schools, and other projects which are direct investments in the community, and 20% is used by the park for operational expenses.

Volcanic eruptions are entirely unpredictable, and Mt Nyamuragira’s epic eruption could continue for months, or die down tomorrow. If the volcano remains explosive and Congo’s elections remain peaceful, Nyamuragira could help usher a new era of tourism for eastern Congo. Yet given the historically unpredictable pattern of events and the continued conflict in areas surrounding Goma, it may take many years before eastern Congo appears on the itineraries of anyone but the most adventurous of travellers.