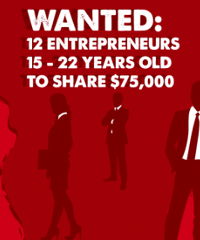 Entries are now open for the Anzisha Prize, the premier award for Africa’s top young entrepreneurs. Over US$75,000 in cash prizes will be shared among 12 of the continent’s most exciting social and business entrepreneurs between the ages of 15 and 22 years old.

Hosted by the African Leadership Academy (ALA) in partnership with The MasterCard Foundation, the Anzisha Prize celebrates initiative and innovation. Now in its fifth year, the Prize has grown into one of the most sought after awards for young entrepreneurs on the continent. In addition to cash prizes, past winners and finalists have since benefitted from media exposure, funding, access to business networks and continuous support through mentorship.

The 12 finalists also win an all-expenses paid trip to South Africa to be a part of a week-long entrepreneurship workshop at the prestigious African Leadership Academy in Johannesburg.

Luanda to Rabat: the search is on

Application forms and information are available in English, French, Portuguese and Arabic. And to ensure that young entrepreneurs across the continent are made aware of the Prize, the Anzisha team will also be traveling to a number of exciting African cities for the first time.

“We are travelling across the continent – from west to east; north to south,” explains Wadzi Katsidzira, leader of the 2015 Anzisha Prize Tour activities. “We want young people everywhere to follow our travels on Facebook and give us advice on where to find the best young entrepreneurs in Africa right now.”

Next week official tour activities will be held in Abidjan (Côte d’Ivoire), Luanda (Angola), Kampala (Uganda), followed by Yaoundé (Cameroon) and Rabat (Morocco) in March. Johannesburg, Nairobi and Lagos will also host the Anzisha in the coming weeks.

The Anzisha Prize has also partnered with over 25 organisations across the continent that will be available to assist applicants in countries where the tour does not reach.

‘Anzisha’ means ‘initiate’ in Swahili, and that is what the Prize is about. Africa’s solutions lies within its youth, and the Anzisha Prize is looking for young leaders between the ages of 15 and 22 who are using entrepreneurship to solve problems in their communities and inspire change.

Applications will be judged on the following criteria:

“It was Nelson Mandela who said the youth are the future of a nation, and have the power to bring about drastic change. We at the Anzisha Prize agree, and want to support young people who are creating jobs, providing solutions and ultimately changing Africa’s story to one of success.”

Applications close on April 15th 2015, and nominations are encouraged. Visit anzishaprize.org to apply or nominate now. Both paper and electronic applications are accepted.