A competitive environment for consumer goods and services in Kenya has seen more and more brands invest in advertising as the battle for market share rages on. Increased TV access, wider internet penetration and more conscious viewers has made high-end visual communication key in any advertising strategy. Quite Bright Films (QBF), a production company focusing on commercials, is best known for the popular Safaricom commercials and TV cooking show ‘Tales from the Bush Larder’. QBF co-founder and director, Daniel Prior, told How we made it in Africa’s Dinfin Mulupi how the growing middle class is driving some brands to spend millions in high-quality commercials and the increasing international demand for African content. 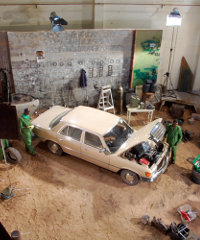 The set of a commercial for Kenyan mobile operator Safaricom.

How did you get into filmmaking?

I studied broadcast journalism at the University of Leeds in England. Journalism wasn’t really my thing and after a short stint as an intern at Reuters, I moved to a production company where I was runner for two years. I moved to Kenya in 2003, because it is my home and because of the then emerging market with the increase in access to TV and the internet. My wife and I started QBF in a small office. Our growth has doubled every year since then. We have worked with big high-spend brands such as Safaricom and Dettol.

We are seeing brands spending much more in the production of high-quality commercials. What is driving this?

We have a growing middle class that has expendable income. They have the money to spend on fast-moving consumer goods and this drives production of high-quality commercials as companies compete for market share. There are currently about five to six companies in Kenya today who can afford very high spend in visual communication. Technology has also changed making it more affordable to produce high-end commercials. The game has also changed; before it was a learning curve. Now people are bringing their A-game to the industry. A lot of players have reached a point where they understand what they are doing and have the skills to make high-end productions.

Describe the challenges you face.

One challenge is the fact that we have to import equipment. This is prohibitive. There is also a challenge in the skill levels of people in the industry. There are literally only two highly skilled people in each position in the country. There are a lot of people who carry around cameras, but that doesn’t make one a world class director of photography. There is an attitude problem here. People get out of film school and think they are the best. There are gaps in the skill sets that exist.

You recently entered an international distribution deal with Fox International Channels (FIC) for one of your TV productions. Should we expect more international demand for African content?

Yes. The rest of the world wants to see positive content from Africa, which they rarely see in news broadcasts. Africa is the last frontier and there is a lot of interest in the continent. However, to get content out of Africa is very complicated. Normally they have to fly crew here. This is prohibitive because it is expensive and the crew normally has no understanding of how things work here. I expect to see a tiger boom here. The opportunities in Africa are unbelievable.

What advice would you give aspiring entrepreneurs?

Entrepreneurship is like being in the army; you start from the lowest rank and you have to work your way up. You have to learn skills and be disciplined. You can’t come out of film school and get to the top overnight. You have to do your time. You have to sweep the floors. I was a runner at a production company for three years, basically making tea for people. Entrepreneurship is, however, not for everyone. We have an extraordinary amount of ingenuity in Kenya compared to other countries. It is not a bad idea to encourage people to use some of that ingenuity to create something, including businesses. However, some people are meant to be part of the team and are better in that environment.

How easy is it to do business in Kenya and other African countries?

It is easy to do business here because the market is not saturated. If you can just deliver on your work, you will succeed. In other cities in the world there is so much oversaturation and competition, such that it impossible to get your head above. Here, quite literally, if you just do what you say you are going to do, have a competitive price, be efficient and honest and deliver quality service, you will succeed. Many businesses are not delivering on their promises. They are cheating, scamming and lying.

Your future plans for the business?

We are opening the first proper studio in Kenya where you can drive a truck and film it there if you want. We are doing this with partners. This will give us a more professional environment to work from. It means we can build many sets in the same studio. This should make us more enticing to international filmmakers.