Since he was 14 years old, Cameroonian Olivier Madiba dreamt of becoming a game developer. In 2003 he started working on Aurion: Legacy of the Kori-Odan, a fantasy game based on African culture and history, and he has since been adapting and enhancing the game. 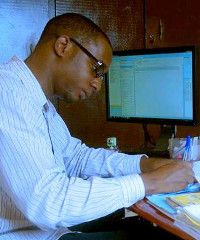 In 2012 he set up the first Central African video game studio, Kiro’o Games. According to Madiba, the studio will produce games inspired by the challenges, history and dramas of day-to-day life without depicting Africans as victims. The latest version of Aurion is expected to be released towards the end of 2014.

How we made it in Africa asked Madiba to describe the gaming industry potential in Africa, some of the challenges he has faced setting up Kiro’o Games, and his advice to other entrepreneurs in Cameroon.

* Madiba’s first language is French and the extract below has been edited for clarity.

What was the inspiration behind starting Kiro’o Games?

Initially, I had never thought to create a video game studio in Africa. I was rather thinking to be a game developer in Europe or the USA. But it was towards the end of 2012 that I decided to get started. Indeed, after having studied the environment of this sector, I realised the immense opportunities that would be available to me, especially in terms of production costs and profitability. In summary, I would say that it has a profitability advantage and, most importantly, the desire to exercise my passion in my country which motivated me to develop this studio.

You have set up the first video game studio in Central Africa. Describe the gaming culture in the region?

The gaming culture on the continent is mostly focused on war games and sports like FIFA, Call of Duty, or Pro Evolution Soccer. We noticed that adventure games are not the most popular because the players here are not able to identify themselves with the characters. However, many have seen through the small demo of Aurion – the earlier version as the one we are currently working on is an [upgrade] – with a character who seems like them, they immediately felt challenged. Consequently, many began to love role playing games and have also tested role playing games of other studios.

There are only a few game developers in Africa, but the industry is growing. What potential do you see for the gaming industry in Africa?

Africa has much to offer to the video game industry; and it can, if precursors’ studios (like ours) provide a good job. We can, for example, be a new source of inspiration for other designers. In addition, it is internationally recognised that Africa is experiencing an economic boom. It may be a new audience with new habits and much less saturated than elsewhere… Africa can therefore consume and produce too.

We must also say that another advantage is that we have the opportunity to provide games at a low cost, which is not the case in other places. It would thus constitute a new market for the foreign studios (European, American, etc) that can come to make their activities in Africa, in order to reduce their costs of production, because life here is relatively cheaper.