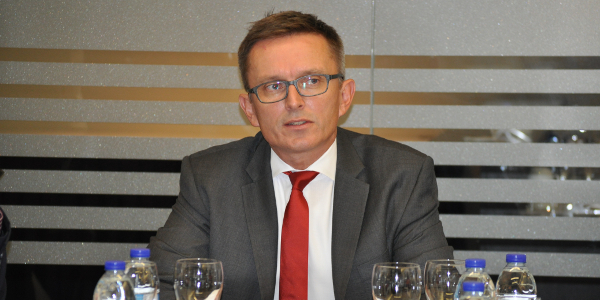 Africa accounts for roughly 10% of Emirates’ global passenger numbers and revenue, according to Hugh Frach, the airline’s divisional senior vice president of commercial operations for Europe, Africa and the Americas.

Emirates – a national carrier of the United Arab Emirates (UAE) which operates over 1,800 flights per week from its hub at Dubai International Airport – has become one of the largest airlines operating in Africa. It already serves 27 destinations on the continent, and is set to add Mali’s capital Bamako to its list by the end of the week.

Africa also accounts for roughly 10% of Emirates’ global passenger numbers and revenue, according to Hugh Frach, the airline’s divisional senior vice president of commercial operations for Europe, Africa and the Americas. In its last financial year ending 31 March 2015, Emirates transported over five million passengers to and from the continent, operating over 21,000 flights.

The airline is also benefiting from demand for business class seats for its African flights, a result of increased commercial activity particularly between Asia and Africa, added Frach.

“Because there is a lot of corporate business within [a number of] markets, for us Africa is also a good premium business continent,” he said during a media roundtable in Dubai last week.

“Many of these African markets are underserved… This is why we believe it is a very interesting market, and we see developing traffic flows between almost every African market and Asia in particular.”

While Africa is Emirates’ second largest region (after Europe) in terms of number of flight destinations, Frach hinted the airline could be doing more in the region, with protectionism by some governments limiting growth in these markets.

“I can only really tell you that we are operating within existing agreements. There might be a situation or a market where we would like to do more because we see more demand. But for given reasons, because a traffic agreement is in place and it stipulates what is allowed, we do what we can.”

Generally, African national carriers are characterised by government bailouts and bankruptcy. For example, Nigeria Airways was forced to cease operations in 2003 after falling into considerable debt, while Zambian Airlines suspended its service in 2009 citing rising costs. More recently, South African Airways has fallen into financial trouble, struggling to compete with low-cost carriers nationally and foreign operators with larger networks internationally.

In 2013 Ed Winter, CEO of an African low-cost carrier Fastjet, told How we made it in Africa that he underestimated the extent that African governments are willing to block competitors to protect their own flag carriers. “The level of protectionism that one sees has astounded me,” said Winter.

“If you go around all the [African] countries, there are loss-making state airlines, and the protectionism being exhibited by virtually all of these governments is doing nothing other than to reduce the level of air transport, kill competition and create a situation where they are going to continue subsidising their own state airline.”

However, state protectionism of airlines is not just a phenomenon on the continent. For instance, in Germany a traffic agreement limits Emirates flights to only four airports – Frankfurt, Munich, Hamburg and Düsseldorf.

“Yes, certainly, when an agreement is restrictive for us we would always love to do more; if we see the business potential we would always like to add more choice to the consumer. But it is a matter of negotiations between governments,” Frach continued.

Another limiting factor for growth of foreign airline operations on the continent is infrastructure. At the Africa Global Business Forum held in Dubai last year, Tim Clarke, president of Emirates, noted aviation on the continent is being limited by inadequate airport infrastructure. For example, many African airports cannot accommodate the Airbus A380, the world’s largest passenger liner, of which Emirates has 67 in its fleet, the largest globally.