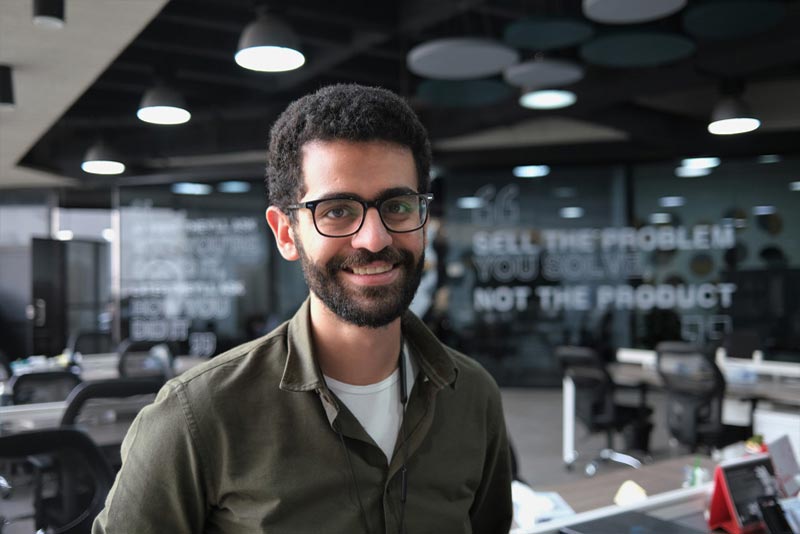 In June 2015, Andrew Saad was interning at a hospital in northern Egypt when an elderly woman was rushed into the emergency room. She was complaining of severe stomach pain – but like many Egyptians, she had no medical records.

Operating without this critical background, doctors had little choice but to administer a three-drug cocktail to fight off inflammation and reduce the pain, even though it can cause liver failure in some patients.

The woman recovered. But the episode stuck with Saad. Two years later, he launched Bypa-ss, a start-up that has created a cloud-based system for medical records.

“I’m just trying to make sure that patients, no matter their social class or education background, can have the same level of care wherever they go,” said Saad.

Bypa-ss is part of a wave of tech start-ups in Egypt that are poised to disrupt healthcare in this country of 100 million people. Specialising in everything from in-home nursing to online psychotherapy, industry players say entrepreneurs are providing a welcome shot in the arm to the medical system, which has laboured during Covid-19 and long struggled with budget crunches and doctor shortages. The emergence of the start-ups comes as Egypt is on the cusp of a generational investment in its medical system. The country has announced plans to roll out universal healthcare coverage within the next decade, an effort that observers say could create a wealth of opportunities for private providers of healthcare and start-ups.

A recent report from IFC and the World Bank, the Egypt Country Private Sector Diagnostic, found that in the years to come, the country will need to invest $10 billion in new hospital beds alone.

“Healthcare has been a very hot industry [and] the indicators are telling us there is still a lot of room for growth,” said Karim Awad, CEO of EFG Hermes, a Cairo-based investment bank. “Egypt is in need of better healthcare infrastructure, whether it is driven by the government or private sector. I think this is something that everyone is in agreement on.”

There are about 100 healthcare start-ups in Egypt, said Yara Abo El Waffa, a co-founder of Health 2.0 Egypt, a non-profit group that promotes innovation in medicine. That number represents a “dramatic” jump from a few years ago, she added.

Many of those start-ups are piggybacking on surging demand for healthcare. Egypt’s population has nearly doubled since 1990, creating an acute need for diagnostic services, medical specialists, and hospital beds. Right now, Egypt has about 1.2 hospital spaces per 1,000 people, less than half of what planners consider ideal.

Government officials have announced plans to implement universal healthcare coverage by 2032, which is expected to further fuel the sector’s growth. The system would provide all Egyptians with access to affordable healthcare, directly subsidising care to low-income households, which comprise about one-third of the population, according to the World Health Organisation.

The government has signaled that private medical providers will play an important role in the universal healthcare programme, which received a $400 million injection from the World Bank last year. A new government body, the Universal Health Insurance Agency, will contract private hospitals and clinics – alongside their public counterparts – to provide care to Egyptians.

That has made industry players bullish about the potential of Egypt’s private healthcare system, which has grown steadily in recent years. As of 2016, there were some 1,000 private hospitals and clinics in the country. Egypt’s healthcare system includes a mix of public, private, and non-profit healthcare providers.

The report noted that the universal healthcare law could be a catalyst for public-private partnerships in hospital building, diagnostic services, specialist care, information technology, and the administration of insurance claims.

Second, while the country has public-private partnership laws on the books, their frameworks need improvement. The report cited in particular “arbitrary… payment mechanisms” and “delayed payments for outsourced activities” as two common stumbling blocks.

“The entrepreneur has the freedom of thinking outside of the box,” Alshakr said. “They are not involved in the day-to-day routine, so they have the capability of seeing things from a different perspective.”

For many entrepreneurs in the healthcare industry, the pandemic has been a crucible, testing their ability to live up to slide-deck promises to disrupt the status quo and improve patient care.

As Covid-19 was sweeping across Egypt in mid-2020, Amr Bakr, the CEO of 7keema, which runs an app that provides home-based nursing care, gathered his staff. “Many businesses will fall down and some will grow,” he recalled saying as Egypt moved towards curfews and lockdowns to contain the virus’ spread. “This is our ‘to-be or not-to-be’ moment.”

Since the start of the pandemic, 7keema (pronounced “Hawkeema”) has provided home care to more than 2,500 Covid-19 patients, in some cases setting up intensive care units in apartments as hospitals wobbled under a surge in coronavirus cases. As of April 10, 2021, Covid-19 claimed more than 12,000 Egyptian lives, according to Johns Hopkins University data.

Established players are also jumping into the digital game. Cleopatra Hospitals Group launched a telehealth system in June 2020 to help treat people with mild to moderate cases of Covid-19. It’s one of several providers that have embraced remote healthcare, which along with genomics and artificial-intelligence-assisted diagnostics is considered an emerging field. The rise of telehealth is part of a seismic change overtaking Egypt’s economy.

“One of the positive side effects of the pandemic is that it encouraged digitisation everywhere,” said Abeer El Shennawy, an economics professor at the American University of Cairo. “Everybody can see how beneficial it is.”

Most telehealth offerings are operated by hospitals and clinics in big cities, part of a bigger divide in the quality of care between urban and rural areas.

The keys to success

In recent years, Egypt has launched a series of reforms to support start-ups and spur private investments in healthcare.

But breaking through remains an uphill battle for many founders in the healthcare space. Along with securing capital, an age-old problem for all start-ups, healthtech entrepreneurs must find established healthcare partners to trial their ideas and navigate laws, many of which haven’t kept pace with technological advances.

To make the road easier, Abo El Waffa from Health 2.0 Egypt said officials will need to develop a “grand vision” for medical technology, creating regulations that implant tech into the heart of Egypt’s healthcare system.

That would free up entrepreneurs to do what they do best: innovate.