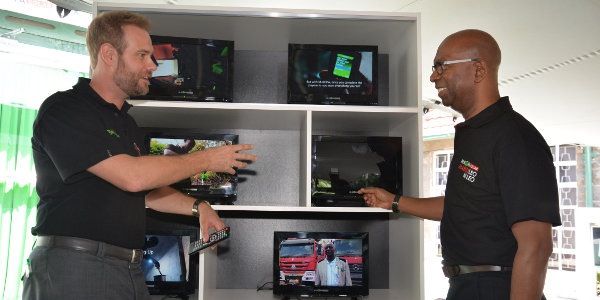 Over the last four years M-KOPA has sold its pay-as-you-go home solar energy systems to over 300,000 low-income earners in East Africa. The system features a battery, light bulb, phone-charging facility and a chargeable radio, and is available to households that can make a Ksh.3,500 (US$34) deposit, and pay off the balance over a 12-month period in daily usage credits of Ksh.50 ($0.50). GSM sensors in the equipment allow M-KOPA to regulate usage based on payments received. If a customer stops paying and runs out of credit, the system ceases to function.

Now households in Kenya that have completed making payments for the home solar system can get the TV for a $15 deposit and daily payments of $0.50 over 24 months. After completing the two-year payment plan, customers own the television and solar power system outright.

According to Jesse Moore, founder and CEO of M-KOPA, some 500 TV sets have already been sold. He says owning a television is “a life-changing proposition” for M-KOPA’s customers.

“We expect that over the next few years we will be bringing television to millions of homes in this country,” says Moore. “We know that about 70% of Kenyans don’t have access to television.”

Learn more about M-KOPA’s innovative business model. In this case study, titled ‘Finding success in Africa’s rural, low-income market’ we take a closer look at M-KOPA’s business, with a specific focus on technology, payments, product design, distribution, marketing and customer care. The information is aimed at those interested in serving rural and low-income consumers in Africa. [/box]

M-KOPA plans to make the solar-powered TVs available in Uganda and Tanzania, where it also operates, by mid-2016. Moore says they decided to first launch in Kenya due to “limited stock”.

The TV set was designed in Kenya by M-KOPA’s engineering team and is manufactured in China. However, the solar panel used to power it is made in Naivasha, about 90km outside Nairobi.

The majority of M-KOPA’s target customers, low-income earners in rural areas, don’t own televisions due to cost and lack of electricity. Last year’s switch from analogue to digital broadcasting also left about one million households that own a TV without service because they did not acquire set-top boxes.

“Owning a television can be a multiple cost proposition – you have to worry about connecting to the grid, paying for the electricity, buying a TV box, buying some sort of decoder, paying decoder fees – the true cost of a television is too high,” says Moore. “Our television comes built with the decoder inside that will be able to catch up to 26 digital channels [for free]. Our customer can take the old money they used to waste on kerosene and [use it to pay for] the TV.”

Catering for the ‘generator gang’

New customers have the option to acquire the expanded ‘M-KOPA 400’ system that features a 20W solar panel, the 16-inch TV, two lights, a torch, a phone charger, and a radio for a Ksh.7,900 ($78) deposit and daily payments of Ksh.125 ($1.2) over a period of 12 months. This new product is targeted at who Moore describes as the “generator gang”, who spend one to three US dollars a day purchasing power from diesel generators.

“These folks are wasting a lot of their money as well on old, inefficient energy alternatives. They can come to M-KOPA… and go straight to the modern solar home with lighting, radio, phone charging and TV… The interest in the market is there for these products.”

More products in the pipeline

The launch of the M-KOPA TV is part of a growth strategy to offer low-income consumers a wider variety of equipment on a pay-as-you-go model. The idea is that customers who have acquired solar lighting will use the money they previously spent on kerosene to buy other goods. Last month, M-KOPA announced it had sold 40,000 add-on products – including bicycles, smartphones, water tanks and cooking stoves – to its existing solar customers.

“It’s almost like alchemy. We are taking money that used to be burnt on an unhealthy, poor-for-the-environment, and not even a good lighting product (kerosene), and we are magically turning that into a modern home where all costs are simple, straightforward and affordable,” says Moore.

M-KOPA is planning to unveil more products designed by its engineering team. An M-KOPA official told How we made it in Africa the company is a year away from launching a small solar-powered refrigerator. There are also plans to design other household equipment such as fans.