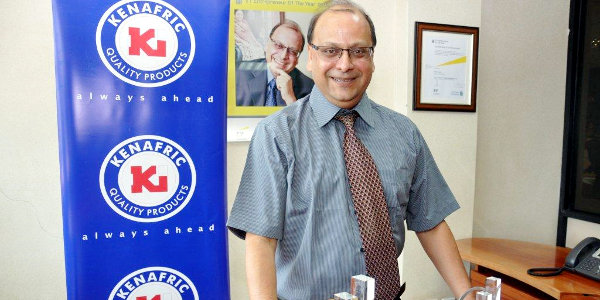 Kenyan entrepreneur Mayur Shah was recently crowned winner of the Eastern Africa chapter of the 2015 EY Entrepreneur Of The Year award.

Mayur is senior executive director of Kenafric Industries, a business he co-founded with his three brothers and father in 1987. From humble beginnings, Kenafric is today a leading manufacturer and distributor of consumer goods. Its brands include ‘OYO’ food seasoning, ‘Fresh’ chewing gum, ‘Obama Pop’ lollipops [and] ‘Chapa Dollar’ flip-flops. Its products are sold in 22 countries across Africa.

He shared some of the reasons for Kenafric’s success with How we made it in Africa.

One of the factors that have made Kenafric a formidable competitor to multinationals is the decision to venture into exports early on. Mayur travelled across Africa, scouting for market opportunities.

“Thanks to Kenya Airways I was able to travel directly to many countries in Africa,” he says.

“We couldn’t afford big overheads so I personally went and did all the canvassing. That is where we got a big kick, because I would put on my track shoes, hit the streets, talk to retailers, and decide right there and then whether or not we would expand to that particular market.

“We would look at the population, lifestyle and culture aspects, and the demographics. Because we couldn’t get reliable industry figures, we made estimates, looked at the competition, and how big the opportunity was. I was hands-on, and we made decisions very quickly,” he explains.

He made many trips to Ethiopia, for instance, and even learnt the local Amharic language.

“Their tradition and culture is quite like us Asians. The people were very friendly even if they didn’t speak English. So there was a connection,” recalls Mayur. “Ethiopia was a very big market for us.”

Although Kenafric eventually left the Ethiopian market due to an increase in duties, the business had thrived for many years and Kenafric is now looking to re-enter. It has done feasibility studies in Ethiopia and Uganda to set up local manufacturing operations.

Being flexible, and willing to quickly adapt to challenges in new markets worked to the advantage of the company.

“In Congo, for instance, our sales team was visiting once and as they went round some retail stores, they found our products were not stocked. They just made a phone call to the distributor and the goods were loaded and delivered. It could have been a chain of emails back to management in Nairobi, then back to the distributors in Congo.

“But we have thin layers, no bureaucracy. Our sales person can make a phone call on the ground and solve the problem there and then. It might take multinationals months to make a decision on an issue, but for us it could take just 48 hours, even less.”

“In those first years we used to come in really early and leave at 9pm even 10pm. I travelled a lot and rarely saw my family.”

But as the business grew, they hired more people to lessen the workload on the founders.

4. Looking beyond the challenges

There are many challenges to doing business in Kenya that has prompted some multinationals to either downsize or exit the market. But Kenafric has found ways to work around the hurdles. Mayur says there is corruption, bureaucracy, constant changes of regulation and levies imposed by Kenya’s 47 county governments which all raise the cost of doing business.

“This year we have done a lot of firefighting. There is just harassment. We are investing a lot of time and resources, not in value addition but in dealing with these issues…We have been waiting for VAT remission for five years: [worth] about Ksh.550m (US$5.4m). It has been a nightmare fighting for it,” says Mayur.

“[But despite the challenges] we always think of our staff who have been with us for decades. We can’t just move. We can’t just look at the numbers. On paper another country might look good, but there too you will face some challenges. I meet people from other countries who say ‘it must be easy do business in Kenya’. So every country has its ups and downs, you have to look at the bigger picture.”

“You have to have a winning attitude,” says Mayur.

During Kenya’s 1982 attempted coup, a trading business owned by Mayur’s father was broken into and looted. The family lost everything.

“All the money my father called his [own] was in the stock that got looted. We were on ground zero,” says Mayur. “It was a difficult time for us as a family.”

But when order returned, the family began rebuilding its distribution business.

“We knew to rebuild would be tough, but we were passionate that things would turn around. We got a lot of support from the extended Shah community – some people forgave my father the debts he owed, and others were willing to wait a little longer to be paid back.”

By the end of the 1980s they bought a plastic shoes business and founded Kenafric Industries.

5. Accepting there will be mistakes

“Entrepreneurs tend to be impulsive decision makers, and sometimes things can go wrong. We’ve had some projects that failed. Ten years ago we started a shiny, sugar-based candy brand and we thought the market would like it – but we were dead wrong. The retail price was Ksh.2 but consumers wanted it for Ksh.1.

“It was also not accepted because it was sticky. In Europe and in India it was very popular, but consumers here weren’t interested. We had put in about $3m investment into the product and tried it for a while – but it didn’t work out.”

Last year Kenafric also invested about $10m in a 15g chocolate line that has been struggling.

“Big lesson – the mistakes keep coming, the learning never ends,” he says. “As with sports, in business sometimes you lose, and I accept that fact. Failure is actually good because an endless string of success is also dangerous. Failures bring you back to the drawing table. You learn from mistakes and move forward.”

If he could go back three decades, what would Mayur do different?

“I would work smarter, not harder,” he says. “I was too much of a risk-taker in my younger days. [I’d advise others] to involve more experts and consultants, be more professional, consider the risks, and make more strategic decisions.”

“But honestly, some of the decisions I made [based on] gut feelings actually paid off.”