E-commerce in Africa is going to be a “game changer”, according to Ashish J. Thakkar, founder of the Mara Group. 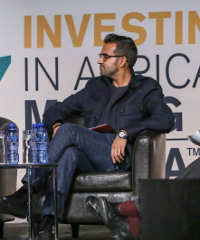 During a panel discussion titled ‘Why Africa, why now?’ at this week’s Investing in African Mining Indaba in Cape Town, Thakkar argued e-commerce is going to solve problems consumers face with accessing traditional brick and mortar retail in African cities.

“A city like Lagos has 20 million people, but just two shopping centres,” he explained. “And we are going to leapfrog in the whole e-commerce play.”

Tonye Cole, CEO of Nigeria-based Sahara Group, added a couple of years ago no one would have believed Jumia and Konga (two of the top online retailers in Nigeria today) would ever take off.

“And all of a sudden, e-commerce is just exploding. Everybody said it can’t happen, and then they find out that not only is it happening, it’s happening beyond imagination. And that’s the beauty about Africa.”

African solutions for its problems

Also on the panel was Robert Hersov, founder and CEO of Invest Africa, who has high hopes for online shopping on the continent as well. “I’m invested heavily in that area.”

He added e-commerce will inspire African solutions for African problems, and it will happen quickly.

“M-Pesa is a pure African solution to resolve the issue of limited banking penetration. The same will happen in e-commerce. People say to me: ‘But the postal system doesn’t work, how will you deliver the products?’ Wait and see. There will be African solutions – overnight – to deliver products to rural areas, maybe piggybacking on existing systems of other products.”

According to a report released in November 2013 by McKinsey & Company, e-commerce will open up a new shopping experience for Africa’s growing middle class over the next decade.

“By 2025, it could account for 10% of retail sales in the continent’s largest economies, which will translate into some US$75bn in annual revenue,” stated the report.