“When you judge Africa by what its leadership or governments are doing, you are judging Africa by what it does worse. And when you ignore people who are working in the informal sector, coming up with hyper-specific local solutions to local problems, you are ignoring what Africa does best.” 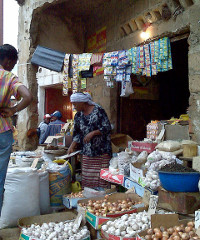 A small, informal shop in Ghana

This is according to Dayo Olopade, a Nigerian-American journalist who moved to Nairobi in 2010 and spent the following three years travelling across the continent to research her recently released book, The Bright Continent: Breaking Rules and Making Change in Modern Africa.

In an interview with How we made it in Africa, Olopade explained how she coined the term “formality bias” to describe the western perception that African economies, where the informal sector rules, are chaotic and disorganised.

“They see it as a sign of backwardness. They see informality, where 70% of employment in sub-Saharan Africa is in the informal sector… they see this as a sign of underdevelopment.”

She noted that while there are many examples of governments and large development institutions failing in Africa, the informal sector is thriving and is often where real solutions emerge to African problems.

At a recent event, Olopade explained how the informal sector is the heart of Africa’s commercial activity and innovation.

Olopade said this is one of the many examples of where an African problem caused by formal and public sector failure has been turned into a business opportunity by the informal sector.

According to Olopade, terminology like “developed”, “first world”, “developing” and “third world” reinforce the idea of what society should look like. For this reason she prefers to use the word “fat” to describe economies like the US that are viewed as developed, and “lean” to refer to countries that are perceived as under-developed.

In “lean” and informal markets, there is a different way of doing business, and specific business skills, such as negotiation, are highly developed.

“If you go to the store to buy something [in the US], the price is written, you hand over the money, you get your receipt, you walk out. What have you really learned there? Whereas in an environment where everything is about trade, negotiation, bartering, time-shifted loans, and other kinds of complicated financial transactions… you have developed different kinds of skills.”

For foreign business people looking to invest in local companies in Africa, Olopade said it is important to understand that capital needs are typically different. For example, private equity funds that are looking to invest large amounts (such as those seen in the US), might struggle to find companies that can absorb that much capital in Africa.

“So your fund might need to be smaller. Work and diligence might need to include actual strategic work with the firms that you are investing in because they don’t come cookie cutter ready-to-go, the way they might in another investing environment.”

Olopade stated that the private sector also has the opportunity to fill some public sector gaps, such as roads, electricity, water, and medical and health.

“That is an opportunity unlike any other opportunity in the world. Where you have super low-hanging fruit around simple things that, in other places, might be taken for granted or might not be as rich an opportunity because the government is providing it,” she highlighted.