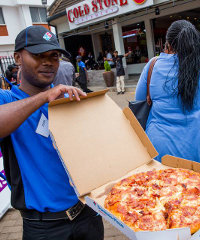 A company called Om Nom Nom is the Kenyan franchisee for Domino’s Pizza and Cold Stone Creamery. Om Nom Nom’s co-founder, Eric Andre, tells How we made it in Africa it has so far invested US$6m in the two brands.

Since 2011, when KFC launched the first US-based fast-food chain in Nairobi, competition has increased. Andre says the appeal lies in the city’s expanding middle class, growth in the number of shopping malls and the availability of a young talented workforce.

He notes Domino’s has had a good reception in the market, drawing family-oriented customers during weekends and mostly male customers during the week. Cold Stone Creamery, more targeted at women and children, has also been well received although initially unknown to many Kenyans.

“Wednesday nights when there is the premier league match we get lots of men who come to have pizza and beer and watch football on the TV screens,” explains Andre.

“A lot of Kenyans have travelled outside Africa and may have seen Domino’s pizza before, but Cold Stone Creamery was unknown to many of them. However we see people buying pizza, then popping in at Cold Stone to try out the ice cream. It is picking up well.”

Borrowing from success in Nigeria

Andre has had a long career working in various countries for global restaurant companies, including Burger King, Pizza Hut, PizzaExpress and Dunkin Brands. His last posting was in Nigeria where he launched Domino’s and Cold Stone Creamery. The outcome in Nigeria was a “good surprise” because Nigeria “became the busiest market in the world for both brands” based on per store average sales figures.

“It beat everybody’s expectations. Nigeria is not as developed as Kenya in terms of retail and there are very few strong brands there. So when we came in, people wanted to try our brands,” he says.

It is the success in Nigeria that prompted two Kenyan investors to partner Andre to bring the US chains to Kenya. Although a smaller market compared to Nigeria, “it is a more sophisticated, easier to operate in and has less corruption”.

He says customers in Kenya and Nigeria have some similarities such as their preference to eat pizza in-store as opposed to take-away, a model that is more common in developed economies. They also appreciate locally-adapted menus, he adds, citing the Swahili Chicken pizza offered in Kenya.

“They want to sit here and be seen eating pizza, not take it home and eat behind closed doors. So we have a lot of sitting space in our outlets.”

Competition will only get tougher

Andre is well aware that it is just a matter of time before other international pizza and ice cream brands open in Nairobi.

“Pizza Hut just opened in South Africa a month ago so I am sure their next stop will be Kenya or Nigeria. Papa John’s Pizza might also come because they are pushing quite hard on international expansion. On the ice cream front I would expect Häagen-Dazs and Baskin-Robbins, which are very strong in the Middle East. I wouldn’t be surprised if the Middle East franchisees find somebody in Kenya to partner with here,” he explains.

But he is not concerned by the impending increase in competition. However, he warns that “eventually private restaurants will suffer” as customers opt to go for the wide variety of global brands.

“Things are going to get tougher for them. There are three ladies working at that bank across the road (pointing). At one o’clock they come here to eat ice cream for lunch, every day. I am sure they used to eat somewhere else before. So that restaurant has lost three customers. Even if they don’t stop eating at the local restaurant, the number of times they’ll be going there will decline,” he predicts.