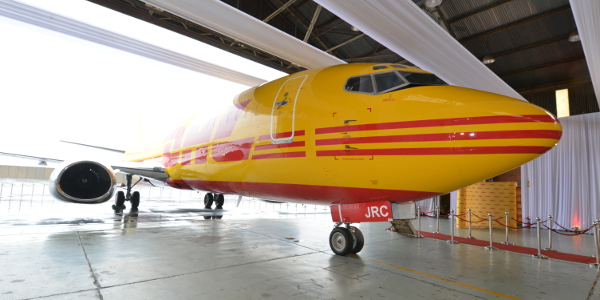 DHL, the world’s leading international express services provider, has enhanced its delivery capabilities in the Southern Africa region with the launch of a new Boeing 737-400F cargo aircraft on the Johannesburg – Harare – Lusaka route. This development further strengthens DHL’s intra-Africa air network and improves connectivity between key country trade partners and the rest of the world.

The DHL B737-400F aircraft, which is the first of its kind for DHL in the Southern Africa region, will be the fourth B737-400F aircraft in its sub-Saharan Africa dedicated air network. The aircraft will carry out flights five days per week from Johannesburg.

The new aircraft has a payload of up to 21 tonnes over the planned route, which is over 200% higher than the effective capacity of the ATR-72 aircraft previously operating on this route, and can also accommodate three times as much volume. More importantly, it will reduce the flight time between Johannesburg and Harare by over 35 minutes, ensuring an earlier arrival and later departure for DHL shipments from Lusaka. In an industry where every minute counts for the customer, this will significantly enhance the quality of DHL services in the Southern Africa region.

“The increase in capacity of the new aircraft brings a new level of reliability and quality of service to the market. We will be able to adjust our aircraft operations to accommodate future increases in demand from the market by introducing even larger aircraft from our fleet where necessary. These developments will allow us to even better fulfill our obligations to our customers both in Southern and sub-Saharan Africa,” said Malcolm Macbeth, vice president, DHL Aviation Middle East and Africa.

“The growth in business activity across the entire region, the development of international trade relations, and the expansion of companies into regional markets require that the express delivery market provide simple, fast and effective delivery solutions. The new aircraft reaffirms the commitment of DHL to develop and drive the express delivery market in Africa,” said Hennie Heymans, CEO DHL Express sub-Saharan Africa.

“We are incredibly pleased to welcome this new aircraft to our fleet and believe it’s an important step to further amplify and support connectivity in the region,” concluded Heymans.

The Boeing 737-400F is one of the core aircrafts in DHL’s dedicated air network in sub-Saharan Africa. It complies with the strict quality, safety and environmental standards to which the company adheres to. The aircraft is also equipped with a Category III C system which enables it to operate in unfavorable weather conditions. The operation of a B737-400F by DHL Aviation within the Southern Africa region will allow the company to broaden the service offering for its customers, and will further reinforce the service reliability and delivery performance of the company.