South Africans Greer Valley and her husband Themba Mntambo are the co-founders of Kushn, a designer goods brand that combines leather with woven textiles sourced from across the continent. 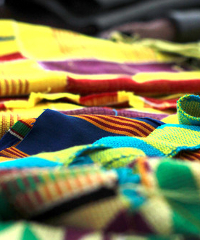 Kushn is a designer goods brand that combines leather with woven textiles sourced from across the continent.

Launched in 2012, the company received seed funding from the National Youth Development Agency (NYDA), with the aim of producing designer shoes, handbags and other products that were “uniquely Africa”.

Kushn began by exporting fabrics from various African countries, but the co-founders soon discovered that some of these fabrics actually came from China, Korea and Holland.

“Wax fabric is actually a colonial hangover from the days of the Dutch East India Company,” Valley explained. “What happened was Dutch traders went to Indonesia and were really inspired by the boutique cloth there and then took that back to Holland, mass produced it, and then sold it to West African consumers en route back to Indonesia. So it formed an integral part of that trade.

“We made the conscious decision that we were only going to use fabrics that were produced on the continent.”

Instead of using the wax fabrics, Valley and Mntambo focused their attention on getting supplies of African woven textiles, such as the ewe kente cloth from Ghana and the shemma cloth from Ethiopia. “We wanted to maintain the ‘Africaness’ of our product,” added Valley

Watch i am youngpreneur’s video on how Kushn grew its African brand.