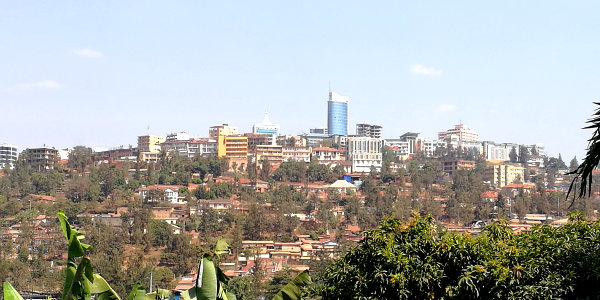 Rwanda’s capital Kigali as seen from the grounds of the genocide memorial. Picture: Jaco Maritz

It is very unfortunate that the world is still plagued with news and pictures that seem to depict a blood-thirsty and war-ravaged Africa. These stereotypes, that are constantly perpetuated by the popular mass and social media, are mainly about a conflict-ridden and politically unstable Africa, ruled by dictators and warlords.

While it is true that there are still a few territories with localised conflict zones, most of the 54 countries in Africa have become more stable and peaceful nowadays. Unfortunately, the depiction of bloodshed in Africa greatly influences investors’ perception, while giving the impression of an extremely high risk level over the whole continent. However, the truth of the matter is that the reality on the ground is not as extreme as often portrayed by these media.

Unlike during the post-colonial era of the 1960s and 70s, there are now less and less widespread civil wars, conflicts and social unrest in Africa. Although there is still civil war in Libya and South Sudan, as well as localised armed conflict zones, most of the continent has become more peaceful since the 1990s. Data from the Uppsala Conflict Data Programme, managed by the Swedish Uppsala University, as well as research from the Peace Research Institute Oslo and Oxford Research Group, all show that there is less conflict and death from wars in Africa.

Compared to Africa with its 1.2 billion people, the armed violence statistics in the US with a population of 323 million, show a stark difference. Unofficial statistics show that there is now a gun for every American in the US. According to the Gun Violence Archive, in 2016, there were 58,774 incidents of gun shooting with 45,691 people killed or injured in the US. Moreover, there were 383 incidents of mass shooting in 2016, increasing from 333 and 274 incidents in 2015 and 2014 respectively. This shows that the US is averaging about a mass shooting daily.

Furthermore, there were 3,796 American children and teens killed or injured by guns in 2016 and this trend has been increasing over the years. Even former President Barack Obama has spoken at least 14 times about mass shootings and gun control. The above statistics about the availability of guns and shooting incidents show that the US is indeed getting increasingly more violent and deadly.

While wars and conflicts have been steadily declining in Africa, the amount of foreign direct investment (FDI) in the continent has been constantly increasing. According to statistics from the United Nations Conference on Trade and Development (UNCTAD), the whole of Africa received only US$1.3bn of FDI in 1970. This has increased to $11bn in 2000 and nearly $60bn in 2016.

Moreover, according to the World Bank statistics, from 2006 to 2016, the economic growth of the sub-Saharan African region averaged 4.7%, while the world grew on average by 2.6%. As for advanced economies like the US, they averaged only about 1.3%. In 2016, the overall economy of the African continent has already reached $2.1tn, 28 times bigger than the $75bn in 1970.

The rise of democracy in Africa

According to the Economist Intelligence Unit (EIU), in terms of democracy, Africa can boast to have Mauritius as a full democracy, together with 18 other countries in the world. Even, the US, the biggest example of democracy in the world, is not considered by the EIU to be a fully democratic country and is not in the group of 19 fully democratic countries like Mauritius. The US is now considered to be a “flawed democracy”, since people are having less confidence with its public institutions.

Unlike in the past, when military coups and civil wars were common strategies for African warlords to take power and control of the country, Africa is seeing more and more democratic elections taking place and the power transition has been relatively peaceful. For instance, Ghanaian president Nana Akufo-Addo and Nigerian president Muhammadu Buhari took over from their respective predecessors, former presidents John Mahama and Goodluck Jonathan, in a process relatively free from strife. Another example is in Tanzania where the transition between the former president Jakaya Kikwete and current president John Magufuli has been without major incidents.

Nowadays, the likelihood of political instability leading to a full armed conflict is also decreasing. Like other developing countries, there is always a certain degree of political risk, but investors should not be unduly swayed by the amplification of negative news by the media. Any investor should know the motto “High risk, high gain; no risk, no gain.” Hence, to achieve their high-return objectives, they should properly assess the political risks and other potential risks with an objective eye.

The initial political crisis in Gambia, with the former President Yahya Jammeh refusing to acknowledge the 2017 election results against him, was eventually peacefully resolved by West African leaders and the democratically elected President Adama Barrow is now fully in charge. This shows that even among African leaders and former military leaders, they are increasingly accepting and acknowledging the results of the democratic process. For 2017, there are at least 14 elections, and so far, most have been conducted peacefully. Hence, for the potential investors in Africa, these should be signs that the overall political environment is getting more stable and mature.

According to data from the World Bank, between 2000 and 2015, 30 out of 54 African countries have improved their overall scores on political stability with the absence of violence and terrorism. In 2015, the top five most politically stable countries were Botswana, Mauritius, Cabo Verde, Seychelles and Namibia. The top five countries that have improved the most in terms of political stability during that period of time, are Rwanda, Sierra Leone, Guinea, Ghana and Namibia. The last five countries have experienced civil wars and conflicts in the past, but now they are all relatively stable.

According to the 2017 Peace Index by the Institute for Economics and Peace, the top five most peaceful countries in Africa are Mauritius, Botswana, Sierra Leone, Zambia and Ghana, while the top five countries that have improved the most, are Rwanda, Morocco, Djibouti, Swaziland and Senegal. Out of the 50 African countries reviewed, 13 of them are enjoying low to very low peace. From these 13 countries, only six will probably be considered as high risk with ongoing conflicts. Hence, by and large, most of Africa is relatively peaceful, contrary to the popular depiction of the continent.

The realities and stereotypes

Africa is the world’s second-largest continent with 54 independent countries. With its relatively high-growth rate since 2000, many African countries are increasingly looking attractive for potential investors. While the negative stereotypes are being perpetuated by the media, the shrewd investors should be very discerning to differentiate between fact and fiction.

Like all emerging economies, there will be some conflicts and unrest in parts of Africa. And in any business venture, there will always be risks to be identified and assessed. For investors to be in a better position to discover the many potential opportunities within the African continent, they should be perspicacious. Doing so will then provide them with better insights about the real situation on the ground and the actual level of risk that is being faced. Consequently, they will not be generalising and concluding that the whole of Africa is a lost cause, when faced with negative news about a specific country or area.

As for the African countries, while all the progress they have made till now should be acknowledged and celebrated, they should not rest on their laurels. All countries in the world are constantly pushing themselves forward. The race for economic growth and development is relentless. Africa must keep on improving its perceived image in the world, as well as its investment environment, so that more foreign investments are directed towards the continent in the future.