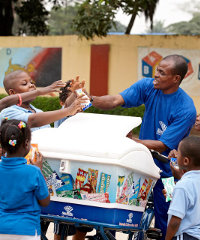 “The group plans to focus on India and Africa in the next decade. They have a lot of potential,” says Danone on its website.

The Paris-listed Danone has operations across the globe, with 190 production plants. In December 2013 it had a presence in 40 African countries selling fresh dairy products and baby food.

The company’s investment in Brookside will give it an extensive presence in East Africa. Brookside produces milk, yoghurt and butter for sale across the region.

In Kenya, Brookside has over the past years acquired majority stakes in market rivals Delamere, Ilara, Spin Knit and Buzeki, sealing its dominance at home. It has also expanded regionally to Tanzania and Uganda. Before the Danone deal, the company’s shareholding comprised the Kenyatta family (90%) and the Abraaj Group (10%)

In a joint statement the French and Kenyan companies said their partnership will enable Brookside to expand its product portfolio and regional presence.

“By uniting Danone’s international expertise in fresh dairy products with Brookside’s regional expertise and robust supply chain, the partnership will enable Brookside’s growth acceleration by expanding its product portfolio and strengthening its geographical presence in key markets in the East African region, including Uganda and Tanzania. This partnership will significantly enhance the platform Danone is currently building in Africa,” reads a statement.

Brookside was established 20 years ago and has the region’s largest milk collection network with 140,000 farmers. The company’s executive chairman is Muhoho Kenyatta, the younger brother of the Kenyan president. The Kenyatta family business empire spans many sectors, with interests in banking (Commercial Bank of Africa), media (Mediamax) and hospitality (Heritage Hotels), and ownership of thousands of acres of land across Kenya.