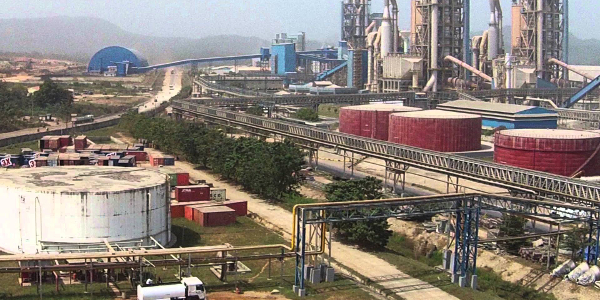 It was not too long ago that Nigeria was one of the world’s largest importers of cement – buying 5.1 million tonnes from outside its borders in 2011. But this year the Nigerian government announced that it is officially self-sufficient in cement production – and Dangote Cement is a major reason behind this. Last year, the company (which holds 60% market share) turned Nigeria into a net exporter of the product for the first time, trading close to 0.4 million tonnes with neighbouring markets.

The business is a subsidiary of Dangote Group – founded by business magnate Aliko Dangote – and owns three factories in Nigeria, including the Obajana Cement Plant in Kogi State which is the largest in Africa. Its 2016 financial results revealed that the company managed to increase sales volumes in Nigeria by 11.1% to nearly 14.8 million tonnes and reported profit after taxes of ₦379bn (US$1.24bn) for the year.

According to Temilade Aduroja, Renaissance Capital’s oil & gas and cement analyst for sub-Saharan Africa, Dangote Cement has managed to perform well, despite Nigeria’s recession, because it invested years ago in building capacity to capture market share.

“In Nigeria there are only like three major players… The barrier to entry is so high in the cement market, so you don’t really see people pushing in because to build a cement plant is very expensive… And Dangote started early with investing strongly in cement plants around the country. This is why he has access to a huge market in Nigeria, because he has route-to-market in all the significant places where there is strong demand for the cement.”

Other players, such as Lafarge and BUA, do not have near the capacity needed to compete for market share, she added.

“Dangote’s capacity is the biggest in Nigeria. The rest don’t have enough capacity. So, even if they were going to increase their volumes, they can only increase it to a particular point. Dangote is actually performing at 50% of capacity… So with any growth in Nigeria, he is already ahead to capture it.”

The Dangote Group has also invested in gas pipelines, which gives its cement subsidiary an advantage with a cheaper source of gas. “Other players might have to pay a tariff to the owners of the pipeline to use the gas,” added Aduroja.

But despite its successes in its home market, the company’s rest-of-Africa business is still not breaking even. Dangote Cement has an ambitious pan-African expansion strategy and currently has operations in nine other African markets (and is also launching in Congo and Sierra Leone). However, it reported a second consecutive year of losses in its operations outside of Nigeria – losing ₦39bn ($126m) in 2016.

According to Onne van der Weijde, the company’s CEO, the strategy is to “expand very rapidly across Africa and in doing so, diversify the business in terms of markets, risks and sources of revenue and profitability”.

“Outside of Nigeria we’ve had operations that have now been running for more than a year and they are experiencing good growth and improving profitability, so we have managed to offset some of those topline pressures in Nigeria with revenue streams from countries in very different parts of the continent,” he stated in the company’s 2016 financial results.

“Furthermore, those pan-African operations are helping to generate foreign currency for the Group, so this shows how a long-term decision to diversify can help with a short-term pressure like an illiquid currency market in Nigeria. Obviously, this will be helped by increasing the amount of cement we export from Nigeria to places like Ghana and Cameroon and that’s a focus for the coming years.”

Aduroja expects that it might take another three or four years before the company’s African operations start to become profitable, as the company invests to first build capacity to take on established players.

“I think east Africa is a tough market. There are a lot of players and east Africa is very fragmented, so I think Dangote is still probably going to have it tough in east Africa,” she added. “Another thing in east Africa is they haven’t banned the importation of cement. It is not like in Nigeria where you can’t even import cement so you have to rely on Dangote, Lafarge or BUA. In east Africa you have cheap imports.”

“When Dangote opens in a new market, for the first two or three years he obviously has to be loss-making because he first of all goes there and reduces prices. When you reduce prices the prices are too low to take up the margins, but his plan is just to capture market shift first of all.”

The company had also planned to launch in Kenya next year, but has recently delayed plans to enter the market until 2021.