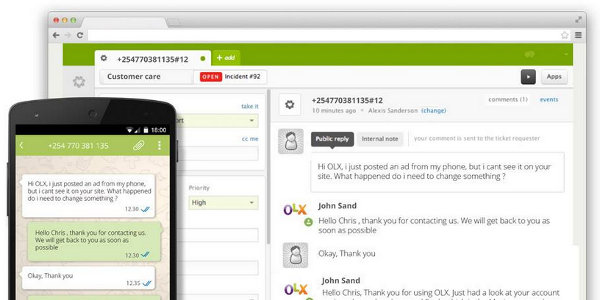 Kenyan start-up Ongair is taking on the opportunity to help companies better communicate with their customers through instant messaging platforms like WhatsApp and WeChat.

Ongair offers businesses a desktop interface through which they can easily send messages to individuals and groups. They can also tag and track complaints and other issues raised by customers.

While individuals can chat via WhatsApp without needing a service such as Ongair, it becomes more challenging for businesses needing to communicate with hundreds or thousands of people using one or just a few numbers.

“A WhatsApp account can only be used with one number on one device. So if you have a customer care team of 10 people – are they going to pass the phone around? With us the customer sees just one WhatsApp number but on the other side it could be 10 people responding to queries and talking to hundreds of other customers,” says Ongair co-founder and CEO Trevor Kimenye.

Companies pay a monthly subscription fee to access the dashboard. “We don’t charge you per the number of messages you send, so you can send as many as you wish. We have priced it around the features we offer our clients. So a small business might need only one number, while a bank may need maybe three numbers. We are trying to price it as a smarter SMS replacement,” explains Kimenye.

According to the company, it currently has over 500 customers.

Outside of the continent, Ongair has attracted users in South America and Asia.

“We have got a florist based in Miami who runs about 15 shops across South America in places like Mexico and Argentina. He uses our products to talk to his customers and in every country he uses a local WhatsApp number so people feel like he is ‘close’, not far away in the US.

“We also have a few customers in the UK and the Netherlands, but really don’t have a huge following in the traditional developing countries. It is in emerging economies that we are seeing the most interest,” says Kimenye.

“South America is quite ahead in things digital – and they are so adventurous in the things they do and they are good in adoption. One of our customers in Brazil told us he wants his customer service to be entirely run on instant messaging – nothing on SMS or phone calls.”

The growth of Ongair’s client base outside the continent has however made operating out of Kenya a hurdle. Kimenye notes that until June, 60% of Ongair’s users were in the continent, in countries such as Kenya, Tanzania, Nigeria and South Africa.

“But this has flipped and now most of our clients are abroad, outside the continent. So collections is a challenge, especially when it is small amounts. We need to figure this out otherwise we can’t scale. We are losing too much money [collecting] small amounts. We managed to convince some people to pay a whole year’s fees up front, so we won’t lose a lot on [monthly] transactions,” he explains.

“The other night I got a call from a [foreign] number and I didn’t pick because it was late. Then a few minutes later I get a notification from the same number with the person saying he was trying to sign up for Ongair and needed help. Although we have a 24-hour customer service line, this guy found my number on the ‘CEO’s letter’ and decided to ring me.

It’s really hard operating a 24-hour company. I get up at 6am and spend the day doing low intensity things then my day gets super busy from 5pm when South America wakes up.

So we have had to learn to fit in… and be effective working in a different time zone than most of our customers. We sell customer care software, so we have to be good at customer service.”