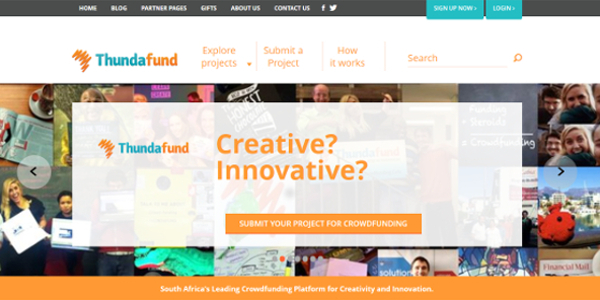 Thundafund is a South African online Crowdfunding Café and marketplace for creatives and innovators.

Start-ups in Africa often complain about banks being unwilling to lend. In the absence of loans, small businesses often fund themselves through savings and capital from friends and family. But crowdfunding platforms are increasingly bridging the finance gap and offering start-ups in Africa a lifeline.

Mira Mehta is co-founder of Tomato Jos, an agricultural company that helps tomato farmers in Nigeria. Using Kickstarter, which claims to be the world’s largest crowdfunding platform, Tomato Jos raised US$55,000. Angel investors pledged another $230,000 to Tomato Jos outside the platform.

“It was hugely legitimising to our angel investors that we said, ‘Look, you know, 500 to 600 people are willing to pay us for no equity in the company, just because they think it is a really cool idea.’ As much as traditional investors would say that they are not swayed by stuff like that, I think that was a draw,” Mehta told VOA.

Crowdfunding has seen huge success in the United States and Europe. In 2014, Kickstarter raised $529m for more than 22,000 projects.

So, how does it work? A start-up advertises its project online and supportive backers pledge money, though not to profit financially. Instead, project creators offer rewards to thank backers.

In emerging African markets, banks usually do not extend loans to start-ups because of low collateral and the high risk of default. In Nigeria, Africa’s largest economy, only 14% of small to medium-size enterprises, or SME’s, have access to a bank loans or overdraft protection, according to the World Bank.

In South Africa, Patrick Schofield co-founded Thundafund to help drive innovation and entrepreneurship in Africa. Since launching in 2013, Thundafund has raised nearly $365,000 for 117 projects.

“It is not just the funding gap that is an issue, but it is also trying to figure out whether an idea is worth pushing forward or not,” he said. “You have such a high failure rate of new enterprises that are launched – less than 30% of all new enterprises are actually needed or can gain traction in the market. Crowdfunding is actually a very effective way to test a new idea or new product, speaking directly to consumers as opposed to investors.”

Another platform, LelapaFund, is designed to tap into the African diaspora. For those interested in investing in emerging markets but wary of the risk and cost involved, crowd-investing is a good compromise, according to co-founder Elizabeth Howard from Paris.

“We wanted to make it easier for Africans in the diaspora to invest in African SMEs back home, with the hypothesis that the best investors in Africa are Africans themselves,” she said.

But projects have to jostle for funding with thousands of others. Also, money raised in some countries, like the United States, is costly and cumbersome to transfer to others in Africa.

Crowdfunding platforms may create some good publicity and give start-ups legitimacy but this does not automatically translate to money, said Mehta.

“We were only able to set a very high goal because we were reasonably sure that within our network we would be able to accomplish that. I do not think a lot of entrepreneurs consider that, they think it is going to go viral,” she said.

“Do you think that within the personal network of people you know you can raise this money? And if you do not, it may be a stretch and that is part of the reason why a lot of these projects fail. People do not really consider where the money is going to come from,”  Mehta continued.

Despite the risk, crowdfunding could be transformative for projects that have social and economic impacts in Africa. – VOA