Tonight like every night, Africa’s creative talent will be showcased across the continent. 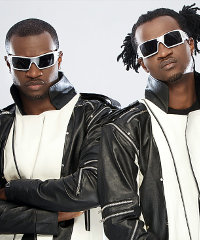 In Cape Town, South African opera stars Andiswa Kedama and Pauline Malefane’s voices will captivate audiences while they perform U-Carmen eKhayelitsha, a Xhosa adaptation of Bizet’s famous opera. In Agadez, internationally acclaimed guitarist and songwriter Bombino, dubbed the next Jimi Hendrix, will mesmerise an audience with his music and lyrics for change. In Accra, more than 30,000 people will dance the night away at a concert of Nigeria’s famous hip-hop duo, P-Square.

Similar excitement will occur in Luanda as Big Nelo and C4 Pedro take the stage. In Dar es Saalam, 28-year old fashion designer Anisa Mpungwe, will showcase her creations – probably next week she will do the same in New York. In Kinshasa, crowds will gather to appreciate the paintings and sculptures created by award winning artist Rhode Bath-Schéba Makoumbou. Households across the continent will be glued to their television screens watching Egyptian or Nollywood movies as will Africans in the diaspora.

These examples only scratch the surface of the enormity and variety of the creative talent that Africa has to offer. Africa’s informal sector breeds tens of thousands of individuals and communities making a daily living from creativity. The contribution of this sector remains unknown for lack of reliable data; but it is significant.

All this talent is a key ingredient of the creative economy, a term that encompasses visual arts, crafts, cultural festivals, paintings, sculptures, photography, publishing, music, dance, film, radio, fashion, and video games to architecture. It is not just about providing entertainment. It also captures self-expression, innovation, and education to improve lives and build social cohesion. It is serious business, one of the most rapidly growing sectors globally. In 2012, the entertainment and media industry alone injected around US$2.2tr in the world economy, while world’s trade in creative goods and services, generated $624bn in revenues. In the UK, Sweden, the Netherlands and Australia, creative industries account for about 5%-8% of total income and employment , or 2%-4% of the GDP in countries such as Argentina, China, Colombia, Malaysia, Poland, Romania, Singapore and South Africa. Nigeria’s recent national accounts rebasing show that motion pictures, sound recording and music production alone, account for 1.42% of its GDP.

While there is clearly no shortage of talent in the continent, Africa has been relatively poor in profiting from it. In 2010, Africa’s contribution to the world export of cultural goods was reported as marginal, amounting to less than 1%. A lot has happened since then, but the figure speaks to the need to transform these opportunities. Africa’s presence in global markets for creative goods and services has been stagnated by its limited supply capacity, lack of intellectual property knowledge, obsolete policies and regulations, as well as underinvestment in the industry, particularly infrastructure. For example, in the US there are 40,000 movie theatres; India has 20,000; China 13,000; but the whole of Africa has less than 1,000 which accounts for 1 cinema per million people. Such gaps signify an untapped potential for growth. Creativity is the new money and it is time for Africa to reap its benefits.

What is in Africa’s favour? It is already recognised for its music, film, performing arts and craft; and there is demand for its creative talent. There is a need to understand how these value chains work, how art is commercialised and how the incentives are applied. Lessons can be learnt from the world’s leading creative economies, such as the US, where the creative sector is estimated to account for at least 6% of GDP; the result of an aggressive and deliberate strategy. The time is ripe for Africa now for a number of reasons.

With 7m to 10m youth looking for jobs every day, all opportunities should be seized. Africa’s creative economy can trigger a value chain between artists, entrepreneurs, distributors and support services across multiple sectors to provide modern jobs. Cape Verde, said to have the greatest number of musicians per square kilometre, is a good example of how a country can leverage such resources to place the creative economy at the cornerstone of its development strategy. With few exportable resources, Cape Verde is enabling its cultural assets to be a significant contributor to the country’s economy. Efforts have made it easier for artists and producers of creative goods to produce locally as well as for export. For instance, a micro-credit facility referred to as a Culture Bank was created in 2012 to facilitate access to seed money for small entrepreneurs and creators across the islands. To further encourage the creative drive, networks of crafts, art, museums, venues and festivals have been set up across the islands so that everyday culture and arts are stimulating the economy. The recent Atlantic Music Expo that took place earlier this year in the capital Praia, was also a significant step that brought together a wide range of music industry professionals from across the world, connecting then to local musicians, entrepreneurs and distributors, to trigger the value chain.

There is a growing class of new consumers associated with rapid urbanisation and hefty incomes that have brought about a rise in domestic consumption and demand for products and services closely aligned with their lifestyle. This is propelling public spending and private investment in culture. Lagos has a larger consumer market than Mumbai and spending in the continent’s households exceeds those of India and Russia.

Technology and the digital revolution have opened doors for the continent to be a trailblazer for frugal innovation. For instance, digital cinematography gave rise to Nollywood, making it mushroom to become the third-largest film industry by value in the world, after Hollywood and Bollywood. It generates an estimated $500m-$800m annually and is one of the largest Nigerian employers by sector, second only to agriculture. On average, more than 2, 000 feature-length movies are made each year. A feature movie sells an average of 50,000 copies at about$2 a DVD, offering Africans an affordable entertainment option. Nollywood’s model of rapid production and home consumption is now being exported across the continent, with countries such as Cameroon, Ghana, Kenya, and Mali adopting this model over traditional American or European features. Africa’s creative industry needs now to go digital. Research suggests that the highest growth within the creative industry is in technology-centered industries such as software programming and video games; the lowest is in music and film. While animation and game development is gaining traction in some African countries, there is ample scope and opportunity to develop this further.

There is a pressing political recognition that creative industries can fuel growth. Numerous international summits and publications confirm it. UNCTAD has been publishing Creative Economy Reports. Two thirds of African countries have signed the Convention on the Protection and Promotion of the Diversity of Cultural Expressions. This convention calls for greater investment in the creative and cultural industries and for creative products from the south to have preferential access to northern markets. At the continental level there are several policy documents that support the development and growth of creative industries: the 2008 Nairobi Plan of Action on Cultural Industries, the 2010 Abuja Declaration and Charter for African Cultural Renaissance; and the more recent Praia Declaration focusing on the potential of young Africans in the creative economy.

Going forward, governments have a key role in designing, implementing and monitoring robust institutional and regulatory policies that will commercialise and support creative forces. An enabling regulatory framework accompanied by legal protection is essential. Piracy for instance remains a major obstacle due to weak copy and intellectual property rights as well as poor enforcement capabilities. South Africa estimates that it loses 44% of DVD revenues and 15% of which is online. It is imperative that for the creative economy to grow, to operate under a functioning system of intellectual property rights. This will not only regulate ownership, give creators or authors control over the use of their work, but also facilitate trade as well as encourage serious investment in the sector.

Strengthened partnership with the private sector and civil society would go a long way in ensuring investments in all elements of the value chain, from building human capital to strengthening domestic supply capabilities. In the past, Africa has lost many artists trying to make a living and obliged to accept their work being legally or illegally stolen. This is one of the reasons many artists go live abroad. Africa can no longer afford a continued talent drain. Instead the focus must be on strengthening and providing specialised education and training including entrepreneurial and business service skills, support for artistic development, modernizing production, strengthening distribution networks and promoting consumption and branding. Given that the majority of the enterprises in the creative industries are small, partnering and facilitating access to finance, in forms of credit, grants, loans, are key. The Kwani Trust, a Kenyan based literary network has been able to publish and distribute contemporary African writing, offer training opportunities, organise literary events and maintain global literary networks. Bozza, a pan African mobile and digital plug and play solution for African musicians, poets, photographers and film makers promotes and sells their digital products. Arterial Network, a civil society network of creative practitioners and entrepreneurs, specialises on unknown talent, helping it reach profitable income and global influence. Ecobank’s successful Development Fund for West Africa is a first for the banking industry.

There is no doubt that creativity is the new money. In many areas, such as industrialisation, Africa may be a latecomer. On creativity, it is not. But, it needs to get it right to gain from it.