Springleap is an online marketplace that helps brands access a community of thousands of creatives for design projects. Born in Cape Town, the company has already started expanding globally, with its eyes firmly set on Africa. 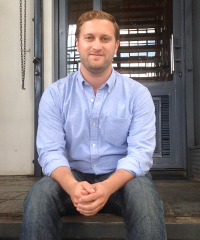 “Ghana and Angola seem to be the safe high-growth markets a lot of clients are going after,” says Trevor Wolfe, Springleap’s MD.

The business was founded by Eran Eyal and Evan Walther, and originally grew from being a platform for local artists to compete in designing T-shirts.

Today Springleap uses a crowdsourcing model where creatives can help brands with creative briefs, and counts the likes of SABMiller, Samsung, Nestlé, Ogilvy and Kraft amongst its clients. It currently has a database of 22,000 creatives – such as copywriters, digital strategists, graphic designers, and photographers – and allows clients access to those with a particular skill set in a particular sector.

For example, if SABMiller is looking for a creative strategist who knows the Kenyan market and has experience with marketing alcoholic brands, the system will notify those who meet the criteria. The designers will then sign a non-disclosure agreement, receive the campaign brief, pitch their creative concepts, and SABMiller can then pick the one they like best. All designers get paid an agreed amount for their time spent creating their concept, and the winner receives additional funding to finish the project.

The company has caught the attention of the global community, and now has offices in Cape Town, Johannesburg and New York. It also managed to raise US$400,000 in funding last year, and a further $600,000 more recently for international expansion.

Trevor Wolfe, Springleap’s MD and head of commercialisation, tells How we made it in Africa more about the company’s operations, plans for Africa and how it is using crowdsourcing to conduct market research.

What is Springleap’s growth strategy for the continent?

Our growth strategy for Africa is to expand our [creative] community. By June of this year we want to grow the amount of creatives we have profiled to 50,000.

We have 30 countries in Africa with creatives in our network, and we want to be a little bit more [rooted] in all those countries so we can perform research.

And then we also want to get [more] South African clients that have pan-African accounts. So any brands like SAB… or any agency that is expanding north – that’s going to be our first growth priority.

We’ll most likely eventually open up offices in a few Middle Eastern and African markets as well, just to ramp-up our business development in those markets. But in terms of community recruitment and sales, we’ve had a pretty easy time doing all of that from South Africa.

Which African countries do you see a specific interest in from clients?

It’s actually fascinating; it feels like a bit of chess game is going on. We see some brands that are trying to skip over the markets [where there are already a lot of brands or competition], and moving into the likes of Burkina Faso and South Sudan.

Obviously there’s a lot of [interest] in Kenya and Nigeria in terms of just the size of the market… And Ghana and Angola seem to be the safe high-growth markets a lot of clients are going after, just to capture a dominant market share.

Then the more conservative brands seem to still be just pushing into the periphery countries like Mozambique, Namibia and Botswana – that’s the natural extension of a South African expansion.

But it’s funny because it feels like a lot of clients are just trying to look where their competitors have already entered and jump into a country where no one has entered yet. So it’s an interesting game strategy.

The company has also recently launched its Creative Insights Division. Tell us about that.

It’s using the same crowdsourcing model, but instead of asking [creatives] to do design work, it’s asking them to provide guidance on what is happening in their markets. So that’s kind of the pan-African [advantage]. If you are SAB and you want to know what bars are like in Ghana, Angola or Burkina Faso, we will recruit those creatives from our panel and ask them to talk about the existing brands in those markets, the existing brand strategies, and the local trends in beverage consumption. And within five days these brands can have insight into African markets in their category, instead of having to spend millions of rand on research projects. We think that’s revolutionary, and going to be the [future] of research.

What risks does Springleap currently face?

The biggest risks would be not being able to find the agencies and brands that are interested in trying something new, something better, and improving their processes. So our model relies on people wanting to do their work a little bit differently, which most companies who try to disrupt something face…

And then if we open up offices internationally, being faced with different economic climates is definitely a risk.

Your most exciting moment at Springleap?

We won the United Nations World Summit Award in December last year which was awesome… It was an award for the most innovative e-business… So that was extremely rewarding for the team.