In 2009, Ghanaian Eyram Tawia and Kenyan Wesley Kirinya founded Leti Games (now rebranded to Leti Arts), a startup company which uses African culture and history as inspiration for the creation of superheroes via comics and games. 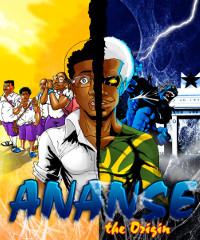 Both Tawia and Kirinya have been dubbed the pioneers in Africa’s gaming industry, although there was initially some dispute between the two business partners as to who was the actual first 3D game developer on the continent. According to Tawia, he was the first developer in the industry in Africa.

“I made a game in 2006, and Wesley made his game in 2007… and his game was published in Ghana as the first 3D game made in Africa. So I looked him up and I was really rude. I was like, ‘hey, you should research very well before you conclude you are the only one making games in Africa’,” Tawia told How we made it in Africa with a smile.

And this was how the two business partners first made contact with each other. Soon after – with the help of the Meltwater Entrepreneurial School of Technology (MEST), a non-profit training and mentoring programme for African software entrepreneurs – Kirinya was flown from Kenya to Ghana to meet Tawia face-to-face, and they decided to start Leti Arts.

Passion for African-based games and comics

Both Tawia and Kirinya have been obsessed with games and comics since they were young boys. According to Tawia, he would make his own superhero comics in junior school and wanted to create games based on those comics, just like he saw Western comic and game superhero developers do.

“So I grew curious to learn how to programme… everything was self-motivated, self-learned, and it was not easy,” Tawia explained.

“My inspiration all along had been [from] seeing this coming from this part of the world because we don’t find games from Africa and the gaming business is what is driving the Western world and we know it’s bigger than the music and movie industry combined. So I feel that that has been the vacuum that has been created here in Africa and needs to be filled to create different jobs – to create more jobs for artists, illustrators, story writers, poets, architects, and transform the whole technological field into a certain standard,” he continued. “That has been my inspiration throughout.”

Leti Arts recently released the pilot of The True Ananse, a digital comic and mobile game series influenced by the African folklore character Kweku Ananse, an individual of trickery and cunning from Ghana.

The True Ananse is the first release of their Africa’s Legends series, which re-imagines popular African folklore and historic legends as an elite group of superheroes fighting crime on the continent today.

Facing the challenges in the African industry

Tawia explained how being a pioneer in the industry has been both an opportunity and a challenge. On one hand they have the first-mover advantage, but on the other hand they are faced with the challenge of developing a new industry, and a culture of gaming in Africa to surround it.

“In order to spearhead or put the culture on par with the Western world we have been trying a couple of innovative ways to get this to that level… we put out iWarrior [in 2009] with the intention of making culturally viable games – like our games would always depict the culture of Africa and the colours will be richer, and we just want to show Africa to the world.”

While a lot of their games do have a market in the African diaspora, Tawia said they hope their culturalised games will also develop a gaming culture in Africa.

Another challenge they face is finding adequate skills. As it is, there are challenges finding skilled African software developers for web and mobile but – with very little focus on the gaming industry – Tawia said they have to train their own developers.

“We invest a lot in time with training people… because as you know we don’t want to outsource work to the Western world because we want to have a story of using our own expertise to make games that compete globally and also build the industry as well,” added Tawia. “So the greatest challenge is resources for us.”

Mobile phones are the future in Africa’s gaming industry

Tawia said three years ago, slow internet connectivity posed a challenge to Leti Arts’ business, but there has since been developments in infrastructure that have improved the situation, particularly in mobile telecommunications. He added that these developments have made the gaming environment ripe for innovation.

“The future is really bright because you can see all these giants – Samsung, Microsoft, Google – they are all making the middle-low end Android phones and Windows phones for this part of the world. Why? Because they see the middle class in Africa growing very quickly so everyone possesses a phone now. Even illiterates know how to use them… So mobile phones, especially the basic smartphones, are just going to blast off, and infrastructure has also expanded accordingly. So we have 3G networks, we have a lot of telecos coming in and I envision internet to be so cheap in the next three years to come, so that innovation has to start,” emphasised Tawia. “Mobile gaming is just about starting; this is just the tip of it.”

Leti Arts distributes its digital comics and mobile games through the Leti Center, a mobile app for smartphones and advanced feature phones.