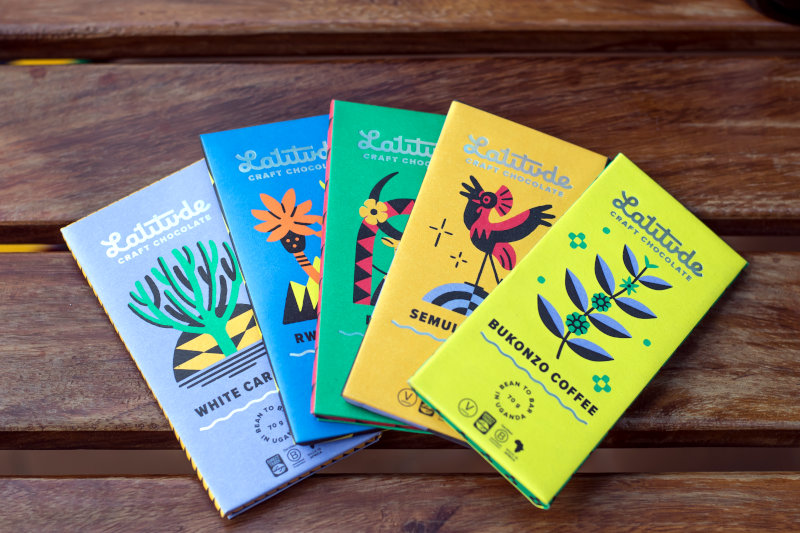 Jeff Steinberg is the founder of Latitude Craft Chocolate, a specialty cocoa and craft chocolate producer based in Kampala, Uganda. Steinberg, who before starting Latitude had worked as a consultant for a number of firms across Africa, spoke to James Torvaney about the craft chocolate industry and the company’s strategy.

“It’s crazy that a cup of coffee could cost more than a chocolate bar,” Jeff Steinberg, who has worked with companies in both industries, tells me. “There is so much more work that goes into a bar of chocolate.”

Over the last few decades, the craft coffee market has grown massively, with boutique coffee shops around the world offering global selections of beans, from fruity and floral East African varieties, to sweet and nutty flavours from Central and South America.

But it’s not just specialist coffee that is proving popular. The market for craft chocolate is also growing. “It is not unusual for single bars of craft chocolate to retail for £10 ($14) in the United Kingdom,” says Steinberg.

Just like coffee beans or wine grapes, cocoa beans differ massively between different terroirs, affected by factors such as soil and climate. “With mass-produced chocolate, you are blending together thousands of tonnes of beans, and adding ingredients such as milk and sugar, so you get very homogenised flavours but you lose the taste of the beans themselves,” says Steinberg. This approach has worked well for global players, such as Cadbury and Lindt, that need to produce millions of bars a year for consumers around the world. 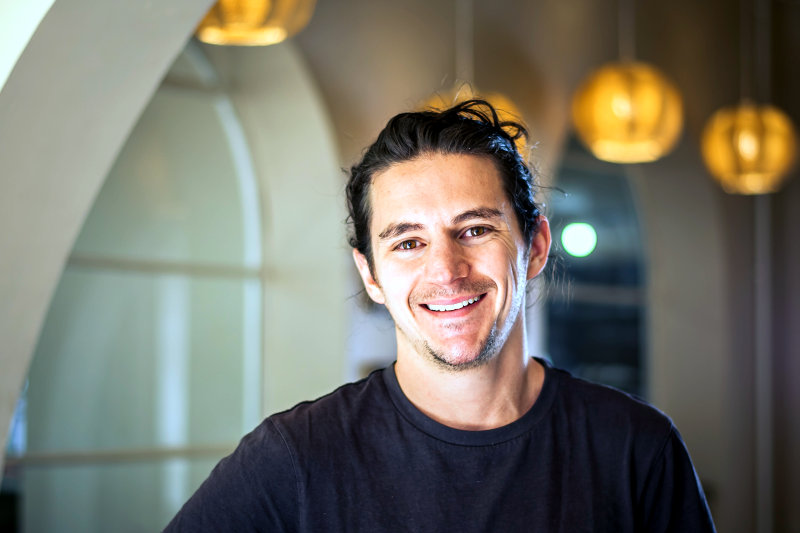 Craft chocolate, on the other hand, is more than just an expensive chocolate bar. It is a different taste experience altogether, with far more attention on the flavour of cocoa beans themselves. There are fewer added ingredients, making the differences between beans much more distinct.

“The breakthrough for people comes when they take craft chocolate from different origins and different manufacturers side-by-side – that’s when they really appreciate the huge range in flavours.”

Learning from the coffee industry

Both coffee and cacao beans grow in similar climates and countries. Steinberg also explains that there are a lot of similarities between the crops’ business models.

“Coffee and chocolate have similar cost and revenue models – both trees take a long time to bear fruit compared to other crops, but can keep producing for up to 20 years. There are also some similarities in processing, although chocolate tends to be a lot more intensive to produce.” 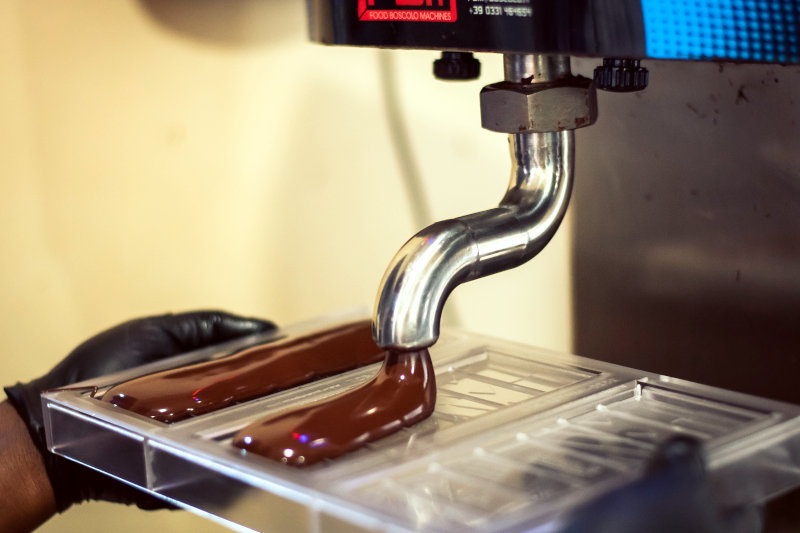 Sales for both products are heavily relationship-based, and it takes a lot of time to build up a trusted reputation. “We spent the first couple of years sending out a lot of samples, but even when a buyer likes your product, it can take months or years for them to fit it into their manufacturing schedules.”

But perhaps the biggest lesson that Steinberg picked up on his experiences in the coffee industry was on the marketing side. “You have discerning, high-end consumers who are willing to pay a premium for the best products. This means the products are ripe for story-telling based marketing, where you can focus on things such as where the ingredients come from and how they are processed.”

More than just a commodity business

Like many agri-entrepreneurs, Steinberg started in trading raw materials – which are easier to scale but have a much smaller share of the overall profit margin – and moved up the value chain as he learnt more about the market. “I started in 2016, buying cocoa beans and figuring out how to export them. Just understanding the product and how the industry worked, and forging long-term relationships.”

Whilst selling value-added products offers higher potential profit margins, it requires much more in terms of investment, and finding customers can be much harder.

“For the first few years, our cocoa trading business was completely subsidising the chocolate side. Even now, a significant part of our business is still in bulk export, which is easier to scale.”

To avoid being pulled into the commodity game, Latitude focuses on procuring premium beans, which can be sold to other bean-to-bar manufacturers for multiple times the price that regular beans command on the commodity market. It is still not an easy market to crack – “there are a lot more farmers that could produce premium beans, than there are buyers who can afford them.” 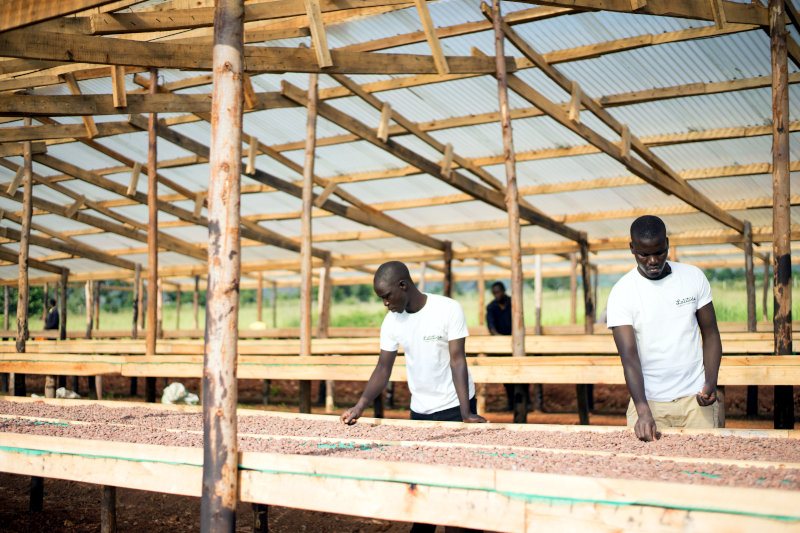 Latitude was founded in 2016, started producing chocolate in 2018, and opened its first large-scale factory in Kampala in 2020. Steinberg acknowledges this was a pretty rapid expansion: “The key was building a real understanding of the entire supply chain, and a culture of systematic experimentation.”

Although cacao grows well in countries like Uganda, it is relatively rare for bean-to-bar producers to be located in warmer climates, where there is limited dedicated infrastructure and retained knowledge compared to more established producers such as Switzerland. It means that Latitude has had to work a lot of things out for itself.

“Chocolate does not like heat and humidity, so we have to have climate control – lots of air conditioners and generators – and tailor recipes to make them more suitable. Different bean varieties require different drying and roasting processes, so we are constantly trying out new techniques and taste-testing them with our customers.”

The company continues to run a hybrid model, selling high quality cocoa beans wholesale, whilst reserving a portion of the harvest for processing in the Kampala factory.

“We produce around five to 20 extra tonnes each year, compared to what our wholesale customers have booked. This allows for last-minute orders, and whatever is not used in the trading business goes straight to the factory, where we process it into the final chocolate bars.”

“Around 40% of our sales of chocolate bars are with the East African region, which is a market we are looking to build up. The rest is sold to end customers in Europe and the United States, through distributors such as Cocoa Runners in the United Kingdom and Bar & Cocoa in the United States.”