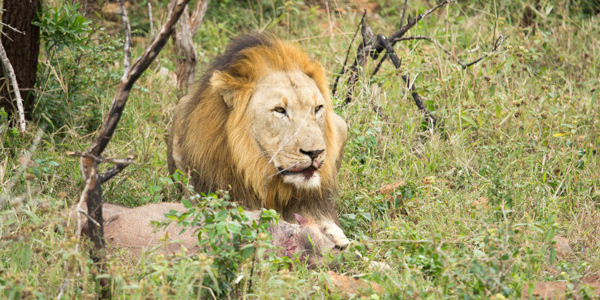 In mid-2015, an American dentist shot a black-maned lion – named Cecil – with a crossbow in Zimbabwe at a reported cost of US$54,000. The hunter soon after discovered that the lion was a well-known favourite amongst visitors at the country’s Hwange National Park and was being tracked by researchers at Oxford’s Wildlife Conservation Research Unit. Cecil’s death sparked international outrage and debates around the ethics of trophy hunting.

However, big game hunting tourism in Africa is nothing new and can be an easy buck for economies like Zimbabwe. Research by the International Fund for Animal Welfare estimates that 8,231 African lion trophies were traded between nations between 2004 and 2014, while the New York Times cites a 2009 study by the International Union for Conservation of Nature that estimated 600 African lions are killed by trophy hunters each year.

But the industry goes way beyond lions. According to the African Sky Hunting website, tourists can hunt an elephant for $22,000, a leopard for $9,000, a giraffe for $3,200, and a crocodile for $,6 500 in Zimbabwe. Other countries – like South Africa, Tanzania and Namibia – offer similar deals.

Trophy hunting is not the only way that African wildlife has been commodified. Cross-border trade of big game varies from regional exports to stock nature reserves in other African countries, to selling animals to zoos in foreign markets. For example, a year ago the US Fish and Wildlife Service agreed to allow three US zoos to import 18 African elephants from Swaziland. And in December, The Times in the UK published an article stating that Zimbabwe was using wildlife exports to settle a military debt with China. The Chinese government has since denied this, with its foreign ministry spokesperson referring to the deal as “normal commercial activity” with payment made to Zimbabwean authorities. Either way, 35 elephants were exported to China.

The concept of treating Africa’s unique wildlife as a commodity is obviously controversial, and raises ethical questions around animal rights and conservation. For example, studies show that lion populations are quickly dropping in Africa and should be better protected.

There are African countries, like Botswana and Kenya, which have banned trophy hunting, while some foreign markets have placed restrictions on the import of wildlife “trophies” into their country. For example, both Australia and France have barred the import of lion trophies, and the US has now placed African lions under its Endangered Species Act – allowing hunters to only bring back their trophies if hunting fees are used to boost lion conservation.

But trophy hunting is not limited to Africa. David Fennell – professor at the Department of Geography and Tourism Studies at Brock University in Canada – notes that his country also has a big game hunting industry for animals that include bear, moose and elk. However, he says this is carefully managed within natural habitats and makes use of a quota system to ensure sustainability.

“What they do is they hand out a certain number of what we call ‘tags’…. The government will say there is [a certain amount] of black bears available to be shot this year and will offer that number of tags. And so you can put your name and particulars into a lottery and if your name is selected then you get to hunt for a black bear that year.”

He adds that the process also respects fair-chase principles, where animals are hunted in their natural habitat under certain rules. This differs from the canned hunting practices found in places like South Africa where animals are bred in captivity for the sole purpose of being hunted. These animals are more docile and hunted in a fenced-in area, meaning the animal has no chance of escape.

Hunting tourism can also be used to prevent over-population and preserve natural balances. Fennell – who is also the editor of the Journal of Ecotourism and co-founder of the International Institute for Animal Ethics – notes this practice is seen in Canada with the culling of deer to control over-population. In African game reserves, similar practices have been used to control elephant numbers.

In some cases, income generated from “conservation hunting” can also help conservation efforts. For example, in 2015, an American hunter reportedly paid $350,000 to kill a Namibian black rhinoceros. It is illegal to hunt this species as they are critically endangered – there are only around 5,000 left on the continent thanks to poaching. However, the permit to hunt this particular rhino was auctioned off legally to the highest bidder in an effort to actually preserve the local herd. The rhino was too old to breed and aggressive, having already killed off other members of its herd.

However, despite the large amounts that trophy hunters are willing to pay to kill big game, Fennell says ecotourism is bigger business than trophy hunting. From a purely business viewpoint (as opposed to an animal rights perspective), this means that using lions to attract tourists on safaris in game reserves could extract more economic value from the lion’s life than a trophy hunt.

Research by Africa Check suggests that trophy hunting in South Africa, for example, only accounts for a small fraction of tourism’s contribution to GDP – with about 8,500 trophy hunters visiting the country each year, compared to around 9.5 million regular tourists.

For Fennell, exporting wildlife to zoos abroad is also diminishing the value of a natural resource. He noted that Africa’s natural wildlife and Big Five (African lion, African elephant, Cape buffalo, African leopard, and rhinoceros) should be used to attract people to the continent to see them.

“We romanticise about these animals from outside of the continent… There are many more people who want to see these animals and shoot them with a camera instead of a gun.”