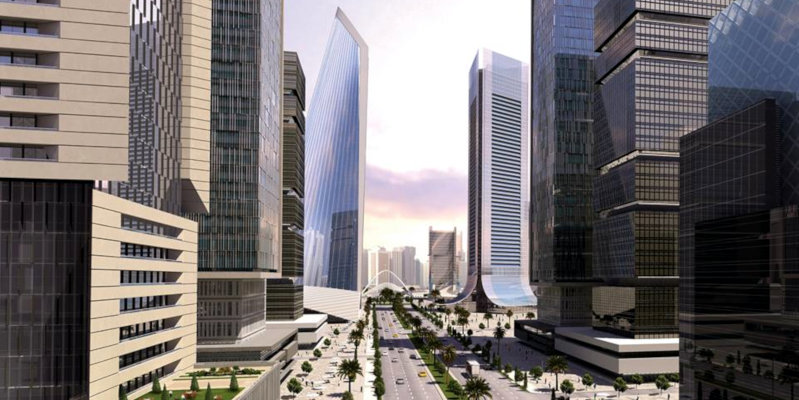 An artist’s impression of Lagos’ new Eko Atlantic City development, currently being built on land reclaimed from the Atlantic Ocean.

In January 2018, the Black Panther film lit a spark of what a transformed Africa could resemble. Wakanda: a fictional African country that is the most technologically developed in the world. Wakanda was more than flying cars – it was a canvas of economic and social prosperity for all African people. A painting of what the new era of technologically driven and socio-economically responsible progress, termed Globalisation 4.0 by the World Economic Forum, could look like. An Africa that would tick all the Sustainable Development Goals (SDGs), estimated to cost at least $600 billion a year. Achieving this needs more than one Black Panther; it needs innovative and inclusive financing mechanisms; a government-backed investment fund and social impact bonds to generate more resources as well as employing blockchain technology to provide transparency.

The fabric of Africa’s transformation will be sewn by generating decent jobs for all. Africa must create more than 130 million jobs to reach full employment by 2020, roughly double the number it was able to create between 2000 and 2008. Time is running out, as 66% of young Africans are either unemployed or in vulnerable employment, yet the continent’s youth population is exploding. The majority of jobs in the world are created by small and medium enterprises. Africa is not short of innovative SMEs, with the drum of entrepreneurship beating from Tunisia to South Africa and from Cape Verde to Mauritius. Challenges arise, however, in gaining access to finance to scale.

To empower innovative SMEs to grow, a government-backed investment fund could be established. An investment fund, similar to venture capital, can be summarised as money invested to grow a high-potential business, often in exchange for equity shares and over a long period of time. This fund would not only invest in technology firms but in a wide range of SMEs with potential for growth, including startups that have validated their business models. In particular SMEs that are transforming economies (e.g. those building local, value-addition industries or providing solutions to development issues such as financial inclusion or affordable healthcare). There are countless examples of such SMEs, including FaLGates, which farms and mills Nigerian rice, or Jamii Africa’s micro-health insurance for the informal sector. Supporting these companies would not only create jobs but efficiently provide vital services through sustainable business models. Such investments would be made across various sectors to diversify risk and over a medium- to long-term period, giving the companies time to grow and eventually buy out the fund, recycling the capital.

If Wakanda had a national anthem, the values depicted in the African Union’s Agenda 2063 would be its inspiration. One promise is to increase the involvement of private capital. This is paramount to cover the large funding gaps that public revenue sources such as taxes cannot fill. Social impact bonds (SIBs) could help cover the gap by aligning government, institutional or private investors and civil society service providers. These differ from normal bonds as they offer financial returns based on achieving social targets. The government would issue bonds subscribed to by investors for projects that generate pre-defined, measurable social-impact objectives. The service providers (e.g. NGOs) use the funds to implement the project, and repayment is only made if the social impact targets are met.

SIBs could be part of the fuel for the locomotive that transforms our public sector. The pay-for-results model can instil the private sector’s results orientation and accountability in public service delivery. The Centre for Global Development highlights that SIBs can also direct scarce resources to interventions that can have the largest impact. Furthermore, SIBs leverage cost savings as the social impact achieved reduces the government spending that might be needed. One example would be SIBs to finance the provision and training of irrigation systems for small-scale farmers. This would in turn reduce the amount governments need to spend on food aid during periods of drought and would not require any public funds until if and when the project had been successfully implemented.

Africa’s progress hinges not only on the ability to collect more funds, because corruption, in different disguises, claims approximately one-quarter of Africa’s GDP every year. As with Wakanda’s systematic protection of the fictional metal vibranium, we must ensure that our resources are invested for the correct purposes, projects and people. I subscribe to the school of thought that the fight against corruption must be decentralised. I believe that blockchain technology could offer a weapon for corruption’s downfall. Blockchain can be simply defined as a decentralised record of information; imagine it as a public database with everyone having a separate yet identical copy. As information is stored in sequential blocks across many different computers, to change the information would require altering all related blocks, for different copies of the blockchain, making it difficult to corrupt.

My first attack against corruption would be to design a public blockchain that records the initial value of development project contracts, the bids received and the final amounts paid (with proof of payment). This database would be publicly available – for an informed public is the oxygen for accountability and democracy. Any discrepancies between the figures would then be investigated by the appropriate institutions who would not be able to alter the information either, preventing collusion. Reducing corruption would also make more effective use of financing methods such as public-private partnerships that are currently riddled with low accountability.

In the end of the Black Panther film, King T’Challa declares that: “Wakanda will no longer watch from the shadows. We cannot. We must not.” In the same spirit, Africa must be bold and lead innovative financing strategies. To do so, I believe we need an inclusive approach with collaboration between the private sector as well as civil society to mobilise resources and combine expertise. A government-backed investment fund and social impact bonds could sustainably provide funds to implement and scale innovative provision of vital goods and services; adopting blockchain technology for transparency and tracking. These three measures can stimulate Africa’s new era of innovation-driven, inclusive growth to Wakanda and beyond.