According to Lewis Booth, the CFO of U.S. car maker Ford Motor Co, Africa may be growing quickly, but still offers fewer opportunities than more robust emerging markets such as China and India. 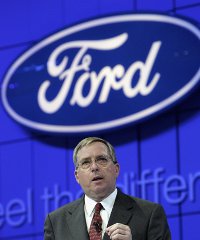 “We are saying in Africa … GDP per capita is still quite stressed and we are not expecting dramatic industry growth,” Booth added during his visit to Ford’s plant in Pretoria. He also indicated that Ford, which is working towards increasing sales by 50% by the 2015, is betting more on Asian countries such as China and India for growth. According to him, the African growth story may still need some time.

Quite clearly, Africa is broadly seen as an increasingly attractive investment target by major multinationals given an average economic growth rate of around 5.0%. However, growth prospects differ across various sectors and industries. The US$2.4 billion Walmart/Massmart deal is a clear testimony of the anticipated growth, particularly in the consumer sector.

Other examples include the aggressive investment strategies by multinationals such as SABMiller, Diageo and Heineken with regards to expanding capacity in Africa and in key markets such as Nigeria.

Recent reports on Reuters also indicate that NYSE-listed Gap Inc is planning to enter Africa this year as part of an ongoing international push. The clothing retailer plans to open stores in Egypt and Morocco with the first Gap store in Egypt expected to be opened next month. Gap Inc is looking to reducing its reliance on North America, where sales have been declining and focus more on emerging markets such as Africa, Serbia and Ukraine.

Another interesting sector is telecoms. We are well informed that Zanzibar Telecom (Zantel), which is a unit of the Emirates Telecommunications Corporation (Etisalat) is looking to increase its subscriber base by two thirds within a year by expanding its operations in mainland Tanzania despite stiff competition in the form of price wars Etisalat raised its stake in Zantel to 65% in 2010. Like Etisalat, telecoms groups such as MTN have also embarked on aggressive strategies in Africa.

Commodities (minerals and agricultural) have also been on the radar of most multinational groups. For example, Canadian uranium producer Cameco Corp has announced that it will be shopping for development-stage uranium projects and will consider opportunities in Africa. The company has major projects underway in Canada, the United States, Kazakhstan and Australia, and plans to double uranium production to 40.0m pounds a year by 2018. Africa is the only major uranium-producing region in the world with Namibia and Niger producing some 15% of the world’s uranium. Interest is growing in Namibia’s uranium sector, with a total of $1.75bn having been invested in Namibia’s mining industry in 2010, and projections indicating that investments can increase by $2.38bn in the next five years.

Overall, some sectors in Africa appear to be more compelling than others. For example, while there are low levels of penetration in the insurance sector, growth prospects remain limited in this area given the low GDP per capita levels and the fact that insurance is generally a higher-order need compared with other basic physiological needs (food and clothing).