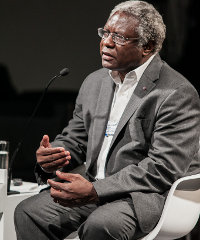 This has caused unease among many Western countries and even within Africa. Some even claim China is Africa’s modern day colonial master.

Writing in the Financial Times in March, Nigerian central bank governor Lamido Sanusi, warned Africa to shed off its romantic view of China.

Last year, hawkers in Kenya demonstrated to protest alleged infiltration into their trading space by Chinese traders, while in Zambia riots in copper mines led to the killing of a Chinese manager.

Professor Calestous Juma from Harvard University’s Kennedy School of Government, argues that despite the negative perceptions, China and Africa’s relationship is mutually beneficial.

“China colonising Africa is a myth. We have mutual investment; China investing in Africa and Africa investing in China. This to me is very significant because both sides have an interest in developing a mutual relationship. The rhetoric of China colonising Africa doesn’t make sense. Colonising means taking people’s land, pushing them off and turning them into workers,” said Juma during a session at the recent World Economic Forum on Africa, held in Cape Town.

According to Juma, China came to Africa through an invitation and African governments engage with China out of choice, not force.

“China is in Africa because it is being invited. It is a choice of Africans to engage with China. They are being invited because Africa has serious problems in infrastructure. You can’t grow an economy if you cannot move goods and services. In the last 30 years, all our partners were telling us not to put money in infrastructure because it would distort our macroeconomic setting,” said Juma.

According to Juma, there is another dimension to Africa’s relationship with China, which is rarely talked about. While China’s investments in Africa are well documented, Africa’s presence in China is under-reported.

“We have a very strong presence of the private sector from Africa in China. Africans have invested about $10 billion in China in manufacturing, ICT and pharmaceuticals,” he noted.

“These African-owned companies that have invested in hi-tech in China are going to be the vehicle for the transfer of technology from China to African countries. It is through this kind of investment that you get flows of technology,” said Juma.

Lessons for the West

Juma said that Western countries can also learn from how China works with Africa. He noted that despite the fast paced changes in Africa, in much of the Western world the old narrative about the continent persists.

On the contrary, Juma explained that Chinese leaders take a different approach of learning about the continent first, before further engagement with African countries.