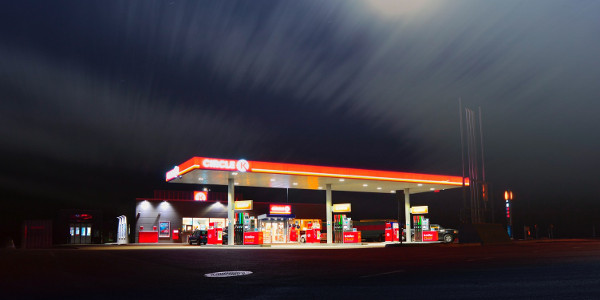 In August 1888, Bertha Benz borrowed her husband Karl’s latest invention – without his knowledge – and drove it from Mannheim, Germany to her mother’s home in Pforzheim, more than 100 kilometres away. That journey has entered the history books as the first long-distance road trip in an automobile. It was instrumental in the development of the car, helping Benz persuade her husband of the commercial potential of his work and garnering useful publicity along the way.

The trip made another little bit of history too. When Benz needed to refuel the Patent Motorwagen No. 3, she stopped at a pharmacy in Wiesloch to purchase ligroin, a petroleum-based solvent. A monument now stands at the site of the first filling station in the world.

Pioneering motorists had to find creative ways to keep their machines running. In the early decades of the car, fuels were only available from pharmacies or hardware stores, usually sold by the bucket or the barrel. It wasn’t until well into the 20th century that dedicated filling stations with dispensing pumps became widespread. In the 1960s, filling stations began the transition from staffed “full-service” designs to self-serve, paving the way for the model most drivers know today.

Since then, they have become ubiquitous. There are variations here and there, as architects experiment with alternative forms and materials. Helios House in Los Angles, for example, the first US gas station to achieve LEED green building certification, is constructed from a mesh of triangular stainless steel panels. German firm J. Mayer H. used reinforced concrete to create an eye-catching monolithic design for a Wissol station in Gori, Georgia. But most filling stations follow the same basic design: underground fuel tanks, rows of pumps under a canopy to protect customers from the rain or sun and a building at the back containing service tills and retail space. Many of those buildings bear the same names and logos too. For 20th century consumers, the filling station became the most visible part of the global energy industry, a place for the oil majors to sell their brands alongside their products.

The golden age of the filling station was short-lived. Cars became gradually more efficient and more reliable. Driving and shopping habits changed. Intense competition in the fuel retail market constrained profits and tighter regulations pushed up operating costs. In the UK, for example, Europe’s third-largest road fuel consumer, the number of filling stations has fallen by more than two-thirds since 1970, from over 30,000 to around 8,500 today. The structure of the market has changed as well. Supermarkets began to add fuel retail to their portfolios in the 1980s and 1990s, alongside the development of bigger, out-of-town locations. Filling stations owned by UK supermarket chains sell around twice as much fuel per site as their competitors run by oil companies.

Against this background, some oil companies chose to get out of fuel retail operations altogether, selling off their filling station networks to third-party groups or individual owner-operators.

The forecourt is back

Today, there is a resurgence of interest in fuel retailing. That’s due to a variety of trends. First, there’s the oil price. The plunge in crude oil prices in recent years didn’t just shrink the industry’s profitability, it also reshaped it. As upstream exploration and production were squeezed, downstream activities – refining and retail – remained relatively profitable.

Markets have changed in other ways. In Mexico, for example, energy reforms in 2013 ended the national oil company Pemex’s monopoly on fuel retail. Other players have rushed to seize the opportunity. BP plans to open 1,500 new service stations in the country over the next five years, and ExxonMobil has also announced plans to invest US$300m in developing a network of filling stations there. Elsewhere, new players are entering the scene. Big oil trading operations like Vitol, Trafigura and Glencore have all added fuel retail networks to their portfolios in recent years.

But the biggest story is one of diversification. Convenient locations, long opening hours and easy parking make filling stations ideal places from which to sell a wide range of products, from coffee and sandwiches to a week’s groceries or a sit-down meal. Filling station owners have ramped up their non-fuel operations, developing their own brands, like BP’s Wild Bean Café chain, or partnering with established retailers. Non-fuel products tend to be much more profitable too. Gross margins from fuel sales are as low as 3%, while non-fuel products often offer margins of 20% or more. Fuel retailers are seeking to tempt customers with technology too. Shell’s “Fill up and Go” service allows customers to pay for fuel purchases via a mobile phone app. The oil company has launched a programme in collaboration with carmaker Jaguar that extends the same system to the vehicle’s onboard computer, allowing the driver to complete the transaction using only the touchscreen on the dashboard.

Other companies are using technology to pull customers away from their cars into the retail environment. In the US, for example, only a third of fuel customers typically visit the store after filling up. Convenience store chain Kwik Chek provides a mobile fuel payment app that also sends personalised offers to the customer’s phone based on their historical purchasing habits.

Filling stations are diversifying in other ways. Some are entering the e-commerce world. Logistics providers – including DHL – and big e-tailers are using them as sites for automated lockers where customers can collect packages. Some stations even operate full post office services, allowing customers to pay bills, send packages and access banking services. In parts of Africa, rural filling stations have become important community hubs, where people go as much to meet and socialise as to buy fuel.

A new injection of energy

The evolving energy landscape is also having an impact. Filling stations have altered their infrastructure over the years as the mix of fuels has changed. In Europe, the use of diesel in passenger cars has risen dramatically in recent years, encouraging stations to dispense the fuel from every pump. Many stations also supply liquefied petroleum gas and a few sell compressed natural gas, too.

Bigger changes are on the horizon. Around the world, governments are responding to pressure to address the air quality challenges created by the combustion fossil fuels in transportation. France announced in July this year that it would ban the sale of new vehicles powered by gasoline or diesel by 2040. The UK followed suit just two weeks later. Other countries have even more ambitious timelines for the phaseout. Germany’s deputy economy minister Rainer Baake told an environmental conference last year that the country wants to stop sales of new gasoline- and diesel-powered cars by 2030. Norway and the Netherlands are targeting 2025 for the same change.

Right now, electric propulsion is leading the race to replace liquid fossil fuels. Today’s battery technology is both a challenge and an opportunity for filling stations. The combination of easy distribution via the electricity grid and long charge times makes homes and offices a logical place for charging infrastructure. Filling stations are likely to play a role, however. Drivers who need to top up their vehicles on long journeys may relish the opportunity to feed and refresh themselves as they wait. And owners living in crowded cities may find it hard to install suitable charging equipment at home, encouraging the development of shared charging facilities.

Advances in battery technology may provide an added boost for the conventional filling station model. Israeli technology company StoreDot, for example, has developed prototype EV batteries that can recharge in only five minutes. Achieving such high speeds requires a 200 kilowatt electrical connection, however, more than is available in most homes. Other companies are exploring the potential of battery swapping systems at filling stations. Electric carmaker Tesla patented one such approach in 2014, for example, although the idea is currently said to be on the back burner at the company.

Other emerging technologies will also give rise to new dedicated fueling infrastructure. As carmakers develop vehicles powered by fuel cells, a joint venture involving energy companies Shell, Total and OMV has announced plans for a network of 400 hydrogen filling stations in Germany.

Filling stations are set to play multiple roles in the energy systems of the future. Their canopies make good sites for solar photovoltaic installations, for example. Total is planning to install panels on 5,000 of its service stations around the world, 2,500 of them in Africa.

There’s some evidence that all this activity is slowing the decline of the filling station, and even encouraging big energy companies to revisit their retail strategies. In Australia, for example, BP has announced plans to buy a network of 527 fuel and convenience stores from retailer Woolworths. According to the European Petroleum Refiners Association, the number of filling stations in Europe has actually increased a little, rising to 125,000 at the end of 2015 from 118,000 two years earlier.

“Tomorrow’s filling stations look set to play a wide variety of roles in the communities they serve. That will have implications for their supply chains as well as their business models,” says Gert Van Dijck, Global Head of Energy Sector Strategy at DHL.

“People need convenience more often than they need fuel or vehicle charging. Service station networks provide access to many consumers and are ideally located to extend services into final-mile delivery and community hubs in emerging markets. This requires flexible and responsive supply chains that support the different services in a cost-effective distribution network. Some companies are already starting to consider integrating their retail offering with the development of autonomous cars and the expansion of ride sharing. One day, a service station network may send an autonomous vehicle with coffee and a croissant to bring you to work and pick you up from work together with your groceries for dinner.”