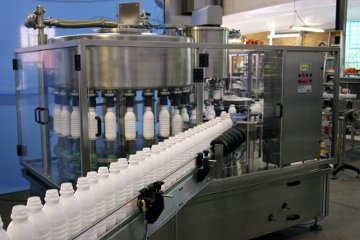 One of Marefa's filling lines in action.

Van Deventer started out selling pears, apricots and peaches to the fruit canners of the Western Cape, and to the local market for drying. In his first move into value adding he began drying fruit 24 years ago. He is still producing quality dried fruit products, specialising in sun-dried peeled peaches. He initially went into value-adding because he did not want to be a price-taker. Drying was one solution, but he also wanted to add value to his second grade fruit. This persuaded JD to begin producing his own chutneys.

Montagu Foods currently produces chutneys, chilli sauces and a number of other sauces and dressings for the house brands of some of South Africa’s largest supermarkets, including Shoprite and Spar.

Central to Montagu Foods’ modern factory, is Marefa’s double-lane lobe pump filler line, which fills more than 50% of the production. The Marefa line is capable of filling anything from 250 ml to five-litre bottles – all that is required is an adjustment on the touch screen of the PLC and some quick change guides to contend with variations in bottle sizes.

In a double-lane machine, while one lane is filling, in the second lane the bottles are being moved in; the nozzles then move over to fill them, resulting in continuous production. Continuous production is important to fully utilise the pumps, which are the most expensive elements of the filling line.

Marefa manufactures a range of bottle and tub filling equipment. The company’s machines are suitable for a variety of liquids, including milk, yoghurt, juice, sauces, cosmetics, creams, detergents and chemicals. In addition to filling, the machines can also automatically label and cap the bottles.

The company’s machines are currently being used in a number of African countries outside South Africa, including Kenya, Zimbabwe and Angola. Marefa has recently also installed the fillers at the Inyange Dairy in Kigali, Rwanda. This is a sizeable project and all their fresh milk and yoghurt will be bottled using Marefa’s machines.

The machines come in various sizes – from entry level fillers for entrepreneurs just starting out in bottling filling, to fully automated filling lines for large-scale producers.