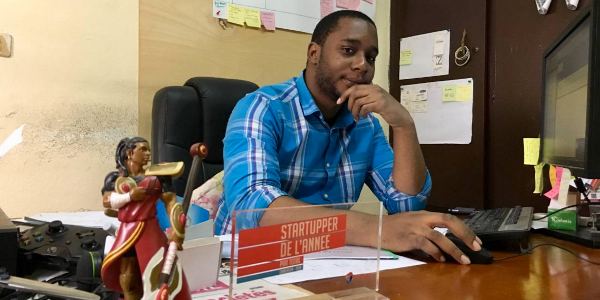 Off a dusty path in the capital city, flanked by chickens roosting in the grass, one of Cameroon’s most successful digital startups is capitalising on its success to foster a new generation of entrepreneurs.

Founded in 2013, Kiro’o Games has grown to become Central Africa’s first major video games studio. It draws on African mythology rather than Hollywood for inspiration, as in its fantasy role-playing game “Aurion: Legacy of the Kori-Odan”.

“Our generation has the duty to bring something really new that will finally generate growth,” said Olivier Madiba, founder and chief executive officer of Kiro’o.

Subscribers pay 10,000 Central African francs (US$17.50) to access a digital training manual, featuring cartoons and advice on how to find good projects, hire the right staff and secure investor funding.

They can also seek online and in-person mentoring from Kiro’o staff.

In volatile Central Africa, better known for conflict, disease and poverty, training locals to set up international companies may seem like mission impossible.

Unlike neighbouring states, Cameroon has been relatively stable for decades, but is blighted by high youth unemployment.

Many young people with professional education are forced to take up lower-skilled jobs such as farming, driving taxis and running market stalls.

But Kiro’o digital communications head William Fankam believes there is another way: create your own work.

“We are wall-breakers,” he said, adding that the gaming team is determined not to let the region’s challenges halt their progress. The company has broken down barriers in education, with its game designers managing to acquire expertise despite a lack of specialised training in Cameroon.

And it has also overcome the obstacle of financing, Fankam said, developing its own model to raise funds from investors. The entrepreneurs’ training programme aims to share Kiro’o’s pioneering approach with others, he added.

That may seem counter-intuitive in a competitive environment, but in Cameroon, there is a need to stimulate a dynamic and creative business community, he said.

“We realised we can’t evolve alone,” he said. “We want to create an ecosystem where we’ll have many startups with different services which would have an impact on the Cameroonian economy, and wider in Africa.”

In just over a year, about 1,000 Cameroonians have signed up for the training.

The Ministry of Posts and Telecommunications has paid inscription fees for more than 800 of them, who are looking to set up technology-focused businesses.

Kenneth Fabo, who runs JeWash, a home dry-cleaning and ironing service in Douala and Yaounde, said the programme is helping him devise a crowdfunding strategy to grow his business.

“They taught us a certain method that helped us prepare to fundraise effectively,” he said, describing how he received training to ensure the business is managed transparently and responsibly in a way that reassures investors.

“All conventional investors, the banks, the businesses, rejected our project,” said Madiba, whose childhood ambition was to make computer games. “So we decided to invent our own fundraising process.”

Through a combination of tactics including YouTube videos, a campaign on creative funding platform Kickstarter and tapping non-conventional backers like the Cameroonian diaspora, the group went on to raise 130 million francs ($227,000) from nearly 90 international investors: “A dream that everyone told us was impossible,” said Madiba.

Arielle Kitio Tsamo, founder of CAYSTI, an initiative that trains youth in technology, and winner of the 2018 Norbert Segard Foundation prize for African innovation, said her company had benefited from the Kiro’o support.

“They helped us structure our business model,” she said, adding the scheme also connected her with government partners.

Challenges for all entrepreneurs

Challenges include a lack of basic business necessities, such as a reliable power supply, with sub-Saharan Africa having the world’s lowest household electrification rate.

Kiro’o’s Madiba admits dealing with power cuts and other fundamental problems is tough, but says the group’s resilience has spurred it on to greater things.

“When we started we were just passionate – but at a certain point we became a symbol of something, and we didn’t anticipate this,” he said, referring to the frequent emails he receives from Cameroonians struggling to set up a business.

Many tell him they do not give up because Kiro’o shows that success is possible.

“It’s not only a job – you are building a legacy,” said Madiba.

Inna Lazareva is a journalist and analyst based in Cameroon, covering Central, West and East Africa. This article was originally published by the Thomson Reuters Foundation.