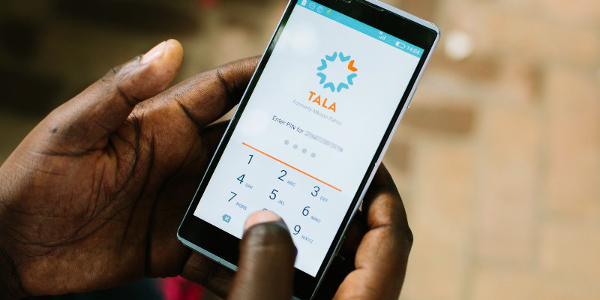 Do you have a car-racing game on your smartphone, or a Zombie game? Do you call your mother frequently, have a daily travel routine, and save contacts in your mobile phone with both a first name and surname? All this information could help determine your creditworthiness.

Tala is a mobile financial services provider that has lent a total of US$20m in micro-loans to over 150,000 customers in Kenya in the last year. The service makes use of an Android app that can give a credit score to consumers who typically do not have collateral to access traditional loans. Once downloaded, the Tala app uses an algorithm to analyse the data on an individual’s smartphone and determine their credit risk – within 20 seconds.

Those that make the cut – 60% of those who download the app – are immediately granted a loan through their M-Pesa account. Loans range from $20 to $500, but the majority are roughly $70. Repayments are also made through M-Pesa.

So how are these smartphone credit scores determined? According to Amanda Donahue, Tala’s vice president for east Africa, the company’s credit-rating algorithm has been shaped by years of analysing smartphone data and user behaviour to understand the profiles of people who are more or less likely to repay loans.

“It has taken time. We had to open up the funnel to people who we knew would not pay back loans, just so that we could understand their behaviour better, as well as look at the people who do pay back to understand their behaviour. So we have gone through multiple alterations to now say that we finally understand how 10,000 data points come into play… and where we want people to fall who ultimately get a loan from us.”

Tala has found, via behavioural patterns exhibited in the data and interpreted using machine learning, that those who play car racing games on their mobile phone are more likely to pay back loans than those who play zombie-themed games. Similarly, those who call their mother frequently and save contacts with both a first and last name are considered more creditworthy than those who don’t.

“We can also look at their loan history. So we can tell through their messages if they have taken loans or have outstanding loans, what their payment cycles look like in a month, and if they are overextended,” she explains.

“Not everyone is approved the first time, but as they keep the app installed on their phone, we are able to update their data and can let them know when they are approved.”

Tala’s app is granted a similar level of data access to popular apps such as WhatsApp and Facebook. This information is not sold to third-party companies.

Donahue says that of the loans, about 70% is working capital for small businesses, while 20% is used for family expenses, and 10% for emergencies. Most clients have an income of between $2 and $20 a day.

“This is a segment of the population who don’t have land, a house, or some other sort of collateral, so they can’t obtain traditional credit through a bank,” she says, adding that with Kenya’s new interest rate caps on bank loans, traditional lenders are imposing even more rigid guidelines for granting loans.

“So there is this whole population that is creditworthy and understands the system, but doesn’t have access to it. And there is about $4.1tn floating around in this system.”

She notes that lower-income families in east Africa are seeing a higher penetration of smartphones through second-hand sales.

Tala’s micro-loans are repaid at a fixed interest rate of between 5% and 15%, depending on the individual’s credit score, the amount borrowed, and repayment period they select.

The amounts that must be repaid through different loan options are shown in detail, and reminders are then sent when payments are due. Loans are typically paid back in three to four weeks.

The service has a 93% repayment rate and could provide many first-time borrowers with a credit history that might help them access larger loans with traditional credit providers such as banks.

Looking ahead, Tala also plans to target other markets in Africa, as well as Asia. It has recently expanded into the Philippines.

“Right now we are looking at a lot of the east African countries. We are launching in Tanzania in November, and then the rest of east Africa shortly after that,” says Donahue.