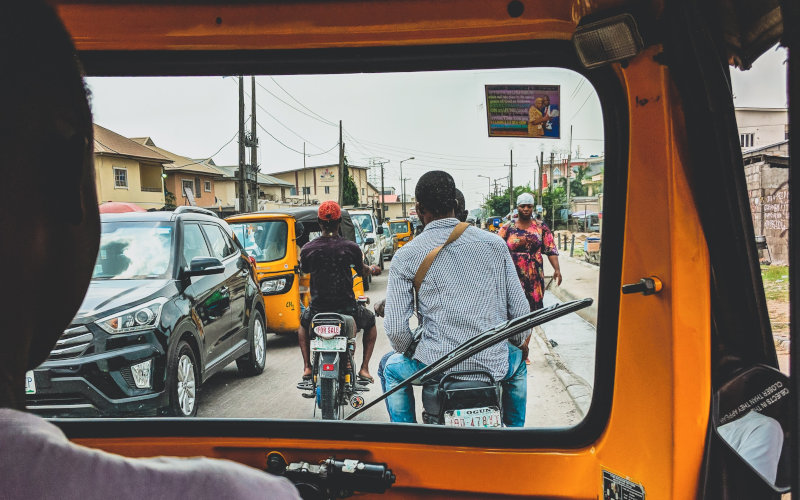 We have been back visiting countries around Africa since late 2021, after the forced Corona hiatus. Most recently it was the turn of Nigeria and Ghana. Daily flights between South Africa and Nigeria are a thing of the past, so we flew into Nigeria and flew home from Ghana later in the week.

Nigeria is Africa’s most populated country, estimated to have more than 200 million people. One in six Africans is Nigerian. In contrast to our recent visits to Nairobi in Kenya and Cairo in Egypt, there is almost no noticeable change to the skyline (of the main commercial city of Lagos anyway) since our last visit. Lagos looks, feels and seems to be operating in its typical inefficient way. It started with the visa applications … after paying the exorbitant processing fees, one visa was issued within a week. The other visa took four weeks, and this was only after submitting additional paperwork not listed on the application.

Still, this was, by all accounts, better than trying the ‘visa on arrival’ option that has recently been made available to South Africans. Experience has taught us to sit as close to the door on the plane as possible and to then run through the muggy departure halls to ensure that you are close to the front of the queue at the emigration hall log jam. After getting processed at passport control, it was then onto finding the driver in the parkade, before finally sitting in the 10pm Sunday evening traffic jam trying to exit the parking lot.

All about foreign exchange

Our fund has been unable to repatriate cash from Nigeria since the start of Covid. So, the purpose of our visit was not just to gain insights on how the listed investee companies are trading, but, importantly, also to get local people’s views on the currency.

Like many other African currencies, Nigeria’s naira is managed. The official exchange rate in Nigeria has been stable since the start of Covid at around 420 naira (₦) per dollar. While there are some corporates and organisations that have been accessing some of their foreign currency needs at this rate, portfolio investors have been excluded from the official market. In order to reflect currency challenges, a haircut is applied to the Nigerian holdings in the fund. The implied rate is gained by looking at the prices of dual-listed companies. Transferring shares from the Lagos register to the London Stock Exchange register is a transparent channel that portfolio investors can access. Nigeria has two key dual listed businesses:

Upon landing, bureaux de change at Lagos airport was offering ₦653 for each dollar; when we left three days later the rate was at ₦700. Every second person in the crowd outside the airport was offering to change cash – in 10 years of travelling to Nigeria I have never been so harassed by currency touts. This alone suggests that the currency situation is worse than it was in 2016. The street rate is, in my opinion, a more reflective free market rate than the implied rate of dual-listed shares, which trade less than $1 million each day. In fact, the corporates we met are having to access alternative channels and are reporting that they are transacting at a blended rates of ₦500 to ₦600 for each dollar.

One of the reasons for the dysfunctional official currency market is that Nigeria’s fiscal deficit (the revenue it collects less its expenses) is at its widest level in history. This means that the government is spending more than it is collecting. The problem is on both sides of the equation…

The more pressing reasons for the fiscal deficit are the fuel subsidy and interest costs. Nigeria may be a large crude oil producer, but none of its oil refineries are currently functioning. This means Nigeria imports refined fuel. While there has been talk of and attempts to stop the subsidy on fuel over the years, the decision to cut the subsidy is too politically sensitive for it have been successful to date.

While we were visiting, petrol was being retailed at ₦165 per litre. At the street exchange rate of ₦650 per dollar this translates to around $0.25. Diesel (used for transportation) is selling for nearly ₦800 per litre or nearly five times that of petrol. At 25c per litre, Nigeria is supplying not just Nigeria with petrol, but the whole region. One acquaintance we met said he can buy petrol at ₦165 per litre, pay ₦150 in bribes, ₦150 in transport cost and then sell the petrol in Côte d’Ivoire at a ₦200 per litre profit. To put this in perspective, Côte d’Ivoire’s commercial hub is 1,000km from Lagos and would require crossing three borders: Benin, Togo and Ghana.

It is estimated that Nigeria is importing double the fuel that is actually consumed in the country. The subsidy is costing around ₦1.2 trillion each month. At the official exchange rate this is around $2.5 billion, and at the parallel rate its around $1.7 billion each month. The flip side of this is that consumer inflation pressures are reduced, unlike in other parts of the world where the rising fuel costs is being carried by consumers.

The latest fiscal figures released the week we were in Nigeria showed that for the first four months of the year (January to April 2022), revenue was 50% behind budget and that interest costs alone came to more than the revenue collection. This means that Nigeria is having to borrow to just to pay the fuel subsidy and wages.

The incentives are just not strong enough to liberate the official exchange rate at this time. If connected people can buy dollars at the official rate of ₦420, and then sell into the parallel market at ₦600 or ₦700, realising a profit of ₦180 to ₦280 for each dollar, why would you want to change it? Average Nigerians each get four travel allocations each year and an annual offshore school fees allocation (2x $15,000) at the official rate, so there are ways for most people to do the same round tripping to realise the gain.

While the airport and the general infrastructure in Lagos haven’t transformed, the one thing that has changed is the attitude. In the past local Nigerians were very proud and excited about the opportunities within the country.

This time, however, every discussion and meeting included the topic of Canada. I am not sure if the requirements to enter Canada have relaxed but it seems many Nigerians have emigrated to Canada, are in the process of emigrating or are considering it. Corporates are saying they are losing talent regularly and it seems that the lack of progress, high inflation and the weaker street exchange rate are impacting lives in Lagos.

As investment managers, we can’t simply switch out of Nigeria into Canada (although to be fair, there have been moments when I had hoped this was possible!). The money is stuck in the country until the foreign exchange situation improves. We have explored some of the channels used by corporate investors, but the paperwork has always been insurmountable.

Fortunately, there are businesses to invest in that are performing well. Rising input costs are hurting margins for cement and consumer businesses, just as demand was recovering post the Covid pandemic. Interest rates are now picking up (although they remain below where they would be without government interference), so they should be supportive of earnings growth in the banking sector. MTN Nigeria, is now the highest valued business in Nigeria and has been delivering impressive growth the last few quarters. Having recently been awarded a mobile money licence, MTN is now investing in its network. This, along with rising fuel prices (most towers are run off generators) means that margins are now contracting after a period of expansion.

Nigeria’s presidential elections are slated for February 2023. The mood, while we were there, was regularly described as one of ‘it can only get better’. The leading candidates are both considered more business friendly than incumbent President Buhari. But we have heard the ‘more business friendly’ view before in Africa and it hasn’t always played out as hoped. Both candidates have question marks about where their vast wealth was acquired. Therefore a fight against corruption and the country’s general inefficiencies, if any, are expected to be a lip-service rather than practical priority. The best we can hope for is that the foreign exchange freeze is addressed, and that recovery of oil production is promoted.

Prior to the trip, we had hoped that the foreign exchange situation would be unblocked with the February 2023 elections. The fiscal situation and the extent of hard currency shortages are more worrisome than before. If food producers are not getting prioritised for foreign exchange, portfolio investors are very unlikely to feature when currency is available. Further, the timing of a potential change in central bank governor and the fact that it took the current president three or four months to appoint a parliament after being elected, means that we have had to push our expectations of currency reform out by a few months. In the meantime, we are using a very conservative rate to value Nigeria so are not concerned about having to devalue further.

This article was first published by Old Mutual Investment Group.