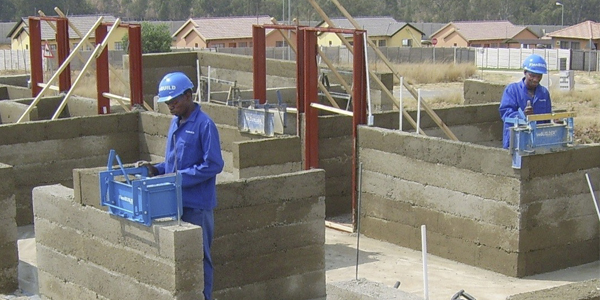 In 2001, the South African housing crisis prompted Frank Finnemore to apply new engineering principles to an old idea and develop it into an innovative building technology that would help solve the huge demand for low-cost housing in the country.

Back in the 1940s and 1950s, Finnemore’s late grandfather – who was a farmer in South Africa’s Free State province – wanted to build a dam. Getting bricks to the farm came at a huge cost and he subsequently invented a steel building mould that would extrude a circular concrete wall. The finished reservoir was strong and watertight. Soon he was building reservoirs for all the farmers in the area. The technology was, however, never further advanced.

When the 2001 housing crisis arose, Finnemore saw a business opportunity by using a re-engineered version of his grandfather’s invention. With his own savings and some bank finance, Frank enlisted a mechanical engineer to redesign the mould. Tests were run by the South African Bureau of Standards and the first FinnBUILDER Gemini moulds rolled off the production line not too long after. Through further development it became an adjustable mould that could be set to build external and internal concrete walls of various thicknesses.

Next came the simplified, easy-to-use and adjustable Circular mould for the building of reservoirs and rondavels, followed by the Pillar mould – also adjustable – as a solution to building boundary wall pillars in record time.

FinnBUILDER has been steadily growing since its early days, selling moulds and offering licensing and training programmes to building contractors, home owners and entrepreneurs all over Africa.

“We target building projects in all sectors of the housing market – low-cost, affordable and luxury,” says Finnemore’s wife and business partner, Praline. Today it has a production facility in Johannesburg and apart from its own eight permanent staff, has 13 active licensees in eight African countries – South Africa, Namibia, Lesotho, Zimbabwe, Mozambique, Uganda, Ghana and Kenya.

She says the licensee system was introduced in 2015 to improve the consistency of applications and quality across all building sites. It improves quality management and ensures the structural integrity of houses built with this system. It was immediately welcomed by the National Home Builders Regulatory Council (NHBRC) and the major banks in South Africa.

There must have been challenges along the way?

For the first year after Frank started FinnBUILDER, Praline remained with the law firm where she worked. There she registered the patents and trademarks for the moulds before joining her husband full time in the Johannesburg-based business.

“As the new company had limited advertising spend, we showcased the moulds at various shows and home expos around the country,” says Praline. Every now and then they ran articles in various DIY, agricultural and engineering magazines.

She says although they believed that they had an innovative solution to the housing crisis, the NHBRC at that time was not interested in innovative building systems. They rejected the FinnBUILDER technology on more than one occasion and for the first five years the company had to target the agricultural and farming communities.

Financial constraints also made it difficult to grow the business at a faster pace. “Escalating running costs, the economic meltdown of 2008 and general lack of business confidence in the country meant that from time to time we had to scale back on production at the factory and fine tune the logistics of running the business,” says Praline.

But they persisted with their system and then, in 2006, the minister of housing and human settlements instituted a nationwide innovative housing competition to find credible building systems that could fast track the delivery of low-cost housing. The competition drew building innovations from Africa, Europe, Australia and China. Based on technical criteria and social acceptance, FinnBUILDER was appointed as the winner of the All Africa Innovative Building Competition.

Today, government is increasingly allocating a percentage of new housing developments to contractors who use innovative building systems. As FinnBUILDER was awarded the Best Innovative Building System in South Africa, licensees have this advantage when tendering for contracts. The system is also ideally suited to African climatic conditions and the startup costs are considerably lower than most other innovative building systems, says Praline.

What can we learn from their experiences?

Praline says although success did not come easily or quickly for them, she can only advise entrepreneurs to believe in themselves and their products and to persist even when they feel like throwing in the towel.

“Keep the end goal in sight. Set smaller, achievable goals to keep focused. Accept criticism positively. Listen to your customers. Be prepared to make changes.” She says it may take a number of years before a business really takes off. “So be passionate about what you do. Work tirelessly, exercise patience and celebrate each milestone along the way.”

And in the end, “nothing succeeds like success”, believes Praline.