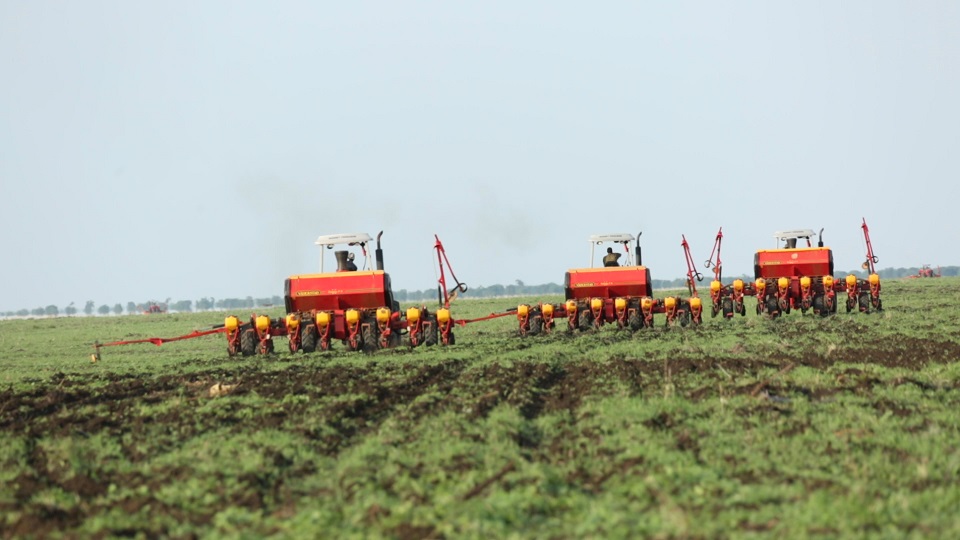 Formally established by Merghani Mahgoub in 1969, Mahgoub Sons Group (MSG) has for many years dominated the agribusiness market in Sudan. Despite facing many hurdles, internal and external, the group has managed to not only survive but thrive in a challenging socio-political environment.

The African Plantation Company (APCO) is the oldest company in the group, and today, APCO is Sudan’s leader in crop production. APCO plants and harvests cotton, sorghum, soybeans, sunflower, maize and millet while outsourcing the farming and harvesting of sesame.

The founder’s successor and current CEO, Wagdi Mahgoub, knew that the key to becoming a market leader lay in diversifying the company not only in Sudan, but globally. With APCO being at the forefront, the group has over six decades grown into more than 20 companies operating across the agriculture, manufacturing, food packaging, transport and media industries. The various divisions that were created to service APCO’s specific needs and later, the needs of the industry in general, were:

This is the second largest division within the group. This division houses APCO and is responsible for crop output that feeds the trading company. The group currently operates nine farms countrywide and owns one farm in the El Gedarif state. This farm has been under the ownership of the company since the 1950s. The number of farms they contract with fluctuates each season due to a variety of factors.

Between 1969 and 1981, Sudan was undergoing what was arguably the worst period of its economic history. The focus on building parastatals by government to the exclusion of the private sector hamstrung the growth of the economy quite severely. With constrained ability to produce and move goods due to deficits in infrastructure, this division, which is third largest within the group, grew out of a direct need for technology, machinery, parts, and labour for MSG’s own agriculture division. As a company determined to use technology to advance its own growth, see better crop yields, and add further value to its own outputs, management realised quite early on that the only way forward was to mechanise wherever possible. Today, MSG Engineering is the preferred partner of several European and Asian machinery and engineering companies.

MSG Engineering is proving to be one of the most promising divisions in terms of growth. Most of the other agricultural players within Sudan do not necessarily want to, or are unable to, invest in their own machinery and MSG Engineering has become a leading supplier of agricultural machinery, parts, servicing labour and mechanical workshops for repairs in this market.

Management believes that this division underpins the success of the previous agriculture and trading divisions. This division’s revenue success is seasonal due to the nature of seasonal agriculture.

The early 1990s witnessed a continuation of the civil war in Sudan. Continuous violence, coupled with famine and disease outbreaks saw the Sudanese economy wither away further. With severely reduced spending power, Sudanese people were looking for ways to stretch their money, and bulk buying was a good option. Furthermore, the Central Bank liberalised its spending focus from agriculture to retail during this time as well. This policy, among other considerations, led to the formation of the trading companies of MSG.

Today, the trading division is the largest division in the group. It contributes approximately 60% of the group’s total revenue. This division operates by exporting the products that the agricultural division produces. It exports the outsourced sesame, sorghum, cotton, sunflower, and lentils and imports sugar, wheat, gas, oil, chemicals and fertiliser.

After the lifting of trade sanctions against Sudan by the US, many companies in Sudan found themselves capable of expanding a little further, and MSG found a niche in manufacturing packaging materials for both the group and complimentary industries within Sudan through Afriplast. Also, because of robust export practises to China, India, Egypt, Turkey, Europe and Pakistan, MSG could further expand on the varieties of cotton it grew through Africot. Presently, plans are well advanced to acquire a cotton processing plant as well as a textile manufacturing plant to further add value to MSG’s cotton production. Management believes the efficiency in cotton production makes it easy for the cotton processing plant to be sited in Sudan whilst the textile manufacturing plant is envisaged to be built in Ethiopia, due to favourable human capital conditions in addition to the availability of low-cost electricity.

At this point in its history, Sudan was highly saddled with external debt. The currency was devalued by the government to encourage the exportation of goods like sugarcane, cotton, peanut, sorghum, sesame and gum arabic, along with livestock. This, among other factors, hindered the development of the services, logistics and industrialisation sectors in Sudan. Most markedly, history points to the British colonial rule which preferred to keep Sudan as a source of raw materials and a market for British manufactured goods .

In this era of Sudan’s developmental history, inadequate infrastructure, like the scant availability of reliable railways and tarred roads, made taking advantage of the devalued currency with exportation a challenge.

The logistics division of MSG emerged out of a dire need to get products to market in a timely and reliable manner. Amid fuel and power shortages, the Commodore Transport Company began by investing in one truck. Presently, the company possess a fleet of 150 trucks which do not only service the group’s logistical needs, but those of the general market as well. The creation of this division allowed MSG to control the narrative around the timing of its internal logistics and its speed to market. In the face of the general challenge of logistics in Sudan, MSG will continue to expand this division too as this division provides 52% of its overall servicing capacity to the group itself and 48% for the external market. The plan is to expand the fleet of trucks to 1,000 in the short-to-medium term and invest in river transportation and storage facilities in Sudan and Egypt. 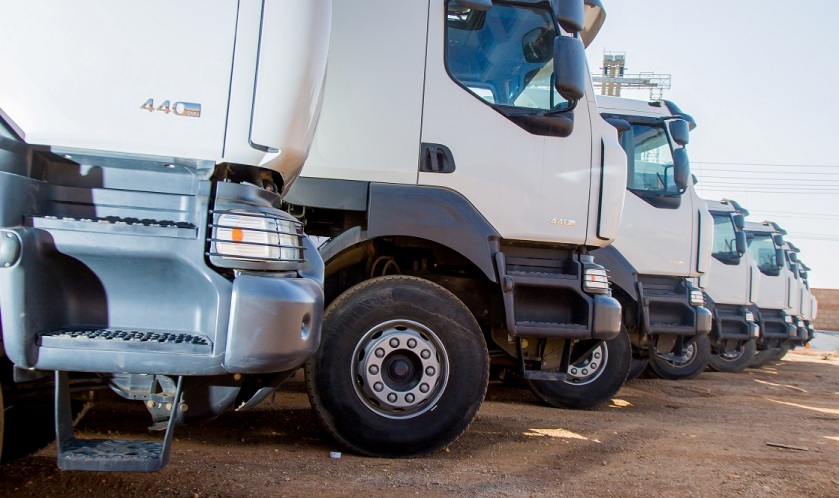 The logistics division emerged out of a dire need to get products to market.

During the escalating violence of the civil war, displacement of people, bombings and general strife, the local market for lower-priced processed Sudanese goods was gradually growing. The food division, a relatively new one, has a focus on the importation and repackaging of foods like sugar and wheat.

The four subsidiaries in the food division are responsible for:

1. Value addition to sesame: There is the primary task of adding value to sesame production through further processing of the sesame into oil, tahini and halwa at MSG facilities in southeast Khartoum. Halwa is one of the top 10 foods consumed in Sudan. Management is looking forward to expanding the production of halwa and considering introducing three other sesame-based products in the fourth quarter of 2021.

Cleaning and hulling: After the sanctions imposed by the US came into full effect, the company realised that the only way the sesame division could further grow would be to focus on adding integrated value, with a focus on the local market and exports to the Sahel region. In line with the company vision, MSG added this division to further process the sesame crops it was purchasing from farmers. This included hulling and cleaning equipment which facilitated a rapid move along the value chain to the next link.

2. Repackaging: This subsidiary focuses on repackaging imported foodstuff like sugar, lentils, rice and milk for reselling within Sudan and neighbouring countries. Consumer behaviour led to the establishment of this division. At one stage, consumers only wanted dry bulk products because it suited their buying power. This later changed after the oil boom. As purchasing power increased, consumers now wanted smaller pre-packaged items and they wanted a bit more variety in the items they bought. This led to growth in the retail and supermarket sector. Consumers subsequently wanted canned and pre-packaged goods and were willing to pay more for it. This change in market circumstances facilitated the decision to re-introduce and re-invent MSGs packaging facility called Delta Food Processing. In 2011, the company began by repacking dry goods specifically and created a local distribution network which helped to better forge ahead with the value-added sesame product.

3. Expanding edible oil refining: MSG’s goal is to grow this division significantly in the next two years. Management is focusing on creating value from crop production streams with oil nuts like cottonseed, peanut and soya in addition to sesame. The refinery development has been delayed because of the revolutionary civil action and Covid-19 but management is confident the plant will be fully operational by Q4 2021. This refinery sits apart from that of the major competitor, Savola. The management of the food division intend to have an element of circularity within the refinery operation, where the waste products such as nut meal is added to the feed of the animals in their fledgling animal husbandry operation.

4. Developing partnerships: The division recently partnered with Nestlé International for the distribution of their dry packaged goods with a view to adding an element of local manufacture to Nestlé’s meat alternative product in Sudan. Despite meat being quite abundant in Sudan, it is beyond the reach of most local people in that it is quite expensive. Nestlé has a long legal border trading history with the country and the partnership between MSG and Nestlé was born out of a need from the MSG side to partner collaboratively with an FDI. This partnership comes with transfer of knowledge, training, investment and equipment.

The food division is a promising division for the MSG group and management plans to expand its processing activities into oil refinery on a grand scale. 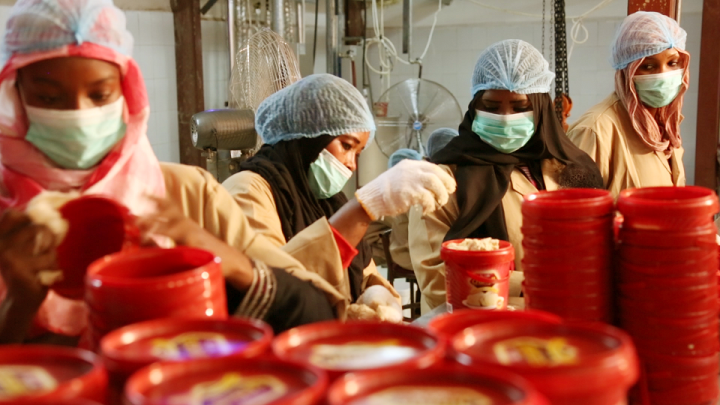 Mahgoub Sons Group has diversified into the processing and packing of food items.

This relatively new division, founded on the Al Mahgoub Pharmaceuticals Company, is a small contributor to the group’s top line. It was founded out of Central Bank of Sudan’s policy to dedicate 10% of export proceeds to the import of medicine. The growth that is required in this division is heavily dependent on the equitable and just creation of laws and policies by Sudanese lawmakers – laws that would aid the importation of scheduled medication into the country. However, the direction is likely to be in supporting livestock projects and expanding into veterinary medicine.

The media business was set up primarily to educate and change the narrative around how agriculture is perceived in Sudan. The media division also serves as a revenue generator from the sale of advertising space and airtime. There are two media companies set up within this division: Sudania 24 TV and Blue Nile Media.

Since its inception, MSG has remained a family-oriented and driven enterprise. From having started out with just the African Plantation Company (APCO) in 1969, the company has now grown well across various sectors and industries, from food packaging, manufacturing and logistics to media production and engineering.

MSG currently owns over 20 companies in multiple industries. These companies directly feed revenue into the MSG portfolio, supplying services and/or goods to the company as well as to external industries.

Sitting at the helm of this company is Wagdi Mahgoub, son of the late Merghani Mahgoub.

MSG currently employs 1,500 people across all its divisions, with this number fluctuating somewhat during harvesting peak seasons. During the harvest season, the company engages with approximately 3,000 seasonal labourers from neighbouring Ethiopia.

Currently the executive board primarily comprises members of the Mahgoub family, with key decision making positions solely held by the family. They also recognise the need to change this structure for their next chapter of growth and are undergoing restructuring which includes expanding the board to non-family members and moving to more corporate structures. Family values, quick decision-making capabilities and a willingness to see their country thrive is what makes this group of companies one of Africa’s hidden champions.