Brazilian companies are playing an increasingly bigger role on the African continent, especially in the Portuguese-speaking, or Lusophone, countries. 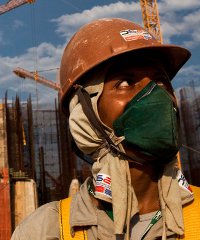 Brazilian construction firms, such as Odebrecht, are pursuing opportunities on the African continent.

“Brazil is now a major economy . . . and it is quite natural that the Portuguese-speaking countries are one of the places to invest from a Brazilian perspective,” said Paulo Pimenta, managing partner of law firm Miranda Correia Amendoeira & Associados at the 5th Africa Economic Forum held in Cape Town last week.

Africa’s five Lusophone countries, Angola, Mozambique, São Tomé e Príncipe, Guinea-Bissau and Cape Verde, are all former Portuguese colonies. It is, however, Angola and Mozambique that are attracting the most interest from Brazilian firms.

Standard Bank last year said in a research report that “the overwhelming thrust of Brazil’s current offering in Africa originates from its dynamic private sector. In infrastructure, firms such as Odebrecht and the Camargo Corrêa Group have carved out meaningful niches. Clearly, Brazil’s revived diplomatic play in Africa is providing cogent new opportunities for private sector investment, particularly in countries such as Mozambique and Angola, where commercial incentives are latticed with cultural affinities.”

“Angola is the largest recipient of Brazilian investment in the African continent with dozens of companies operating in the country,” said Pimenta.

The biggest chunk of Brazilian investment in Angola has been directed to the petroleum industry with state-controlled oil company Petrobras one of the major players. The construction and telecommunications sectors are also attracting investment from Brazil.

Pimenta said the fact that former Brazilian President Luiz Inacio Lula da Silva made his last official state visit to Mozambique in November 2010 is an indication of the importance Brazil attaches to the southern African country.

Mining company Vale is one of the biggest Brazilian investors in Mozambique. Vale has been operating in Mozambique since 2004. Its Moatize project will produce thermal and metallurgical coal, with operations due to start in 2011. Vale also has a project in Evate to produce phosphate rock, currently in the pre-feasibility study phase.

Pimenta noted that he currently receives new enquiries almost on a weekly basis from prospective investors interested in Mozambique’s coal and other mineral resources industries.

“Brazilian expats now form one of the largest foreign communities in Mozambique. Five or six years ago you could rent a flat in Maputo for no more than $1,000. Now you pay $3,500 . . . for the same flat,” he noted.

Pimenta added that while most meetings with public officers in Mozambique are conducted in English, the situation in Angola is different and one has to be able to communicate in Portuguese with Angolan officials.