In the 1980s and 1990s millions of skilled Africans went abroad in search of greener pastures. At the time the continent was largely characterised by disease, poverty, war and dictatorship. In recent years, a reverse of the brain drain has been happening with some Africans starting to troop back home. 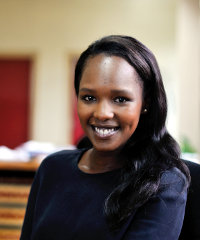 Nonnie Wanjihia is glad to be back in Kenya after spending many years abroad.

Veronica Anam-Waiyaki, a partner at Human Capital Synergies Africa (HCA), a Kenya-based human resources company, attributes the exodus to the economic troubles in developed economies at a time that Africa’s future is looking brighter than ever.

“Many times when I talk to candidates… they say they want to come back home. These are people who are extremely experienced. They have had quite a bit of education; some have been to Ivy League schools and have lived abroad for years. One thing that could be attracting them is the economic opportunities and the fact that Africa is now seen as the next frontier, yet they are seeing their opportunities in the US and Europe somewhat dwindling,” she says.

A 2012 survey by pan-African private equity firm Jacana Partners showed 70% of Africans studying towards an MBA at leading Western business schools were willing to return to Africa to work after graduation.

“If you ever put an advert on LinkedIn you will get so many people applying from across the world. Recently we put in an advert for a French speaking Kenyan internal auditor. It was [a] very unusual [job posting] but we were bombarded with applications. That is how I know that people are looking for jobs,” says Anam-Waiyaki.

However, she explains that finding a job back home can be “very hard” depending on one’s area of expertise.

“If you come back home with an MBA you will find many other people with the same qualification and even PhDs in business. You need to have something that is a notch above everyone else. I know people who have come back home to look for jobs and within a year or two they have gone back abroad because they did not necessarily plan their entry back into the country well enough.”

She adds that gone are the days when having academic qualifications from a university in the west was a guarantee to get a job.

“During my days that was the case. You came home with an MBA and people were scrambling to get you but within five years of my return almost everyone has an MBA. So you lose that bargaining power. You need to come back with a plan [and] with added value. There are some new specialities that are coming up that we don’t have here so if you have one of those qualifications possibly you will find a job quickly,” says Anam-Waiyaki.

The transition is not easy

Nonnie Wanjihia is the executive director of the East Africa Private Equity & Venture Capital Association (EAVCA). Wanjihia studied law at the University of Bristol in England and lived abroad for a total of nine years.

She decided to come back to Kenya in 2011 because she felt “homesick” and was tired of living far away from her family. Wanjihia explains that she did not make arrangements before relocating, adding that once back in Kenya finding a job “was very frustrating”. Wanjihia had worked in London for three years.

“It took me two months to get a job. What was frustrating was the uncertainty; not knowing when I would get back into employment. It is quite difficult and you really have to be patient because it does take a while before one gets a job, but in the end you land on your feet.”

Even after finding a job, Wanjihia had to take a pay cut from what she was earning in London.

“I moved home, so essentially I saved on rent and in that sense I think I was lucky. Some people take even half the pay they were getting abroad while a few are able to get the same amount here,” says Wanjihia.

Martin Kiarie, co-founder of digital marketing agency Bean Interactive, left his whole family in the UK and moved back to Kenya to start his business. Although he was optimistic about the opportunities back home, Kiarie says the transition was hard.

“I had a job at the Royal Bank of Scotland. I was offered a job at Microsoft and I turned it down to come and start a business here. It was very hard. I was earning comfortable money in the UK and I came back to start a new business… I have always taken a long-term approach so I am not really moved by short-term salary gains. I think the potential in Kenya and Africa is huge,” says Kiarie.

Don’t return for the pay cheque

Wanjihia explains that fitting into the workplace can be tricky, especially if one has spent many years abroad. Although her new colleagues at work were friendly and understanding, small things made life difficult.

“[Things] like sending an email and not getting a timely response and language barriers because my Swahili was not up to scratch, made it difficult. It is such small things that make you want to bang your head in frustration.”

However, Wanjihia says she is glad to be back, despite the challenges. “I am so happy to be home. I can’t imagine leaving.”

Kiarie says in the long-term the sacrifices one has to make are worthwhile. Living in developed countries, he says, gives one exposure and opens the mind to new things, but coming home eventually is important because “Africa is hungry for innovative ideas” and value-centric businesses. He explains that one should not be put off by short-term tradeoffs like a pay cut and the difficulties of fitting in.

Whether or not coming back home is worth the effort depends on one’s motivation, notes Anam-Waiyaki.

“Of course you have people who say they never want to come back home but there are also people who are passionate about their country and want to come and contribute to development. So in that sense, yes it is worth it. You may be getting lower pay but hopefully you can see the results of what you are contributing to your country,” she says.