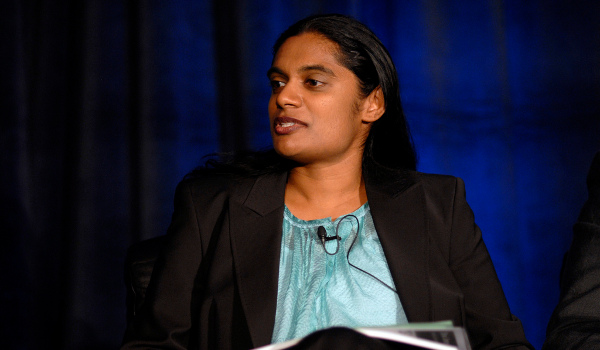 Since taking up its first solar project five years ago, Nyker’s business – lauded by David Westin (a Bloomberg TV anchor) as the fastest-growing renewable energy company on the continent – has expanded its presence at an impressive rate.

With projects in Zambia, Burkina Faso, Ghana and South Africa – as well as having been shortlisted for a plant in Uganda – Nyker sees high potential for growth in countries with already-existing grid infrastructure.

Speaking on a panel, she explained, “So grid infrastructure is really key for us, we don’t necessarily go for the largest or most transformational project, for us the key thing is how quickly we can put the power onto the grid and actually provide power to people.”

Nyker has more than nine years of experience in renewables investment and believes that BioTherm should tackle each project as a unique entity. “We don’t have a cookie-cutter approach,” she said.

She explained that not even a renewables-centred ‘one-size-fits-all’ approach would work. Each country is its own kettle of fish – regulatory bodies, conflict, infrastructure and political policy are just a few of the things that differ across borders.

However, Nyker said that one thing is consistent across the continent: the need for participation from governments. “The government is absolutely key. They are our primary off-taker for wind and solar projects for any renewable project, or any power project for that matter, in most African countries.”

BioTherm’s success in these projects, according to Nyker, when they do work with governments, is due to transparency in their workings and policy. She attributes success in some countries, as opposed others, to a “transparent regulatory framework”, and how that allows one to “secure a PPA (power purchase agreement), develop the project, and actually implement it.”

A tariff, or feed-in tariff, is the amount of money energy producers receive for the electricity they feed into the grid of a country. It’s generally charged per kilowatt-hour. Nyker explained that prices have decreased drastically from the early 2000s, when governments in Europe and Italy paid up to €3/kWh (US$3.37 in today’s exchange rate). Now, for example, the cost of electricity in a wind power deal BioTherm procured in South Africa is just $0.04/kWh.

Tariffs differ from country to country, however, factors that affect the price governments pay include the irradiance (the amount of power produced relative to the plant’s area); how easy the grid is to connect to; and indirect taxes associated with the project. As a rule of thumb, BioTherm tries to remain competitive compared to the levelised cost of electricity in each country.

“And so you can’t say: ‘Well, one price fits all’. You really need to look at a tariff or the cost of electricity relative to that particular country, the rules of engagement and what the outcome is. Because the last thing you want to have is a very cheap – or low – tariff, and a project never being built.”

Another way BioTherm achieved success in the renewables market was through a relationship with American President Barack Obama’s ‘Power Africa’ initiative – a partnership between government bodies and the private sectors in Africa and the US.

Nyker admitted that initially – when it was unveiled at the 2014 US-Africa Leaders’ Summit – she didn’t know, “How to deal with the animal.”

The drive, which aims to double access to power in sub-Saharan Africa, was slow to take off and, at first, a little rough around the edges. However, when the initiative began to refine procedures and put people on the ground, explained Nyker, it became her, “First stop-shop for access”.

“A good example of that is, recently we wanted to do a grid study very quickly in Nigeria. I think I may have sent an email out to the Power Africa team really late that evening. By the next morning I knew who the grid consultant was who was going to work with me.

“It really reduced the timeline to send our team out to Nigeria by about 10 days, because someone was already found, [they were] actually in Abuja, [and] could work with us immediately.”

As Nyker sees it, it is services like this that accelerated BioTherm’s development. And as her company continues to expand across Africa, she will continue to reach out to Power Africa in order to understand the business environment, or the “lay of the land” as she puts it, in each new country.