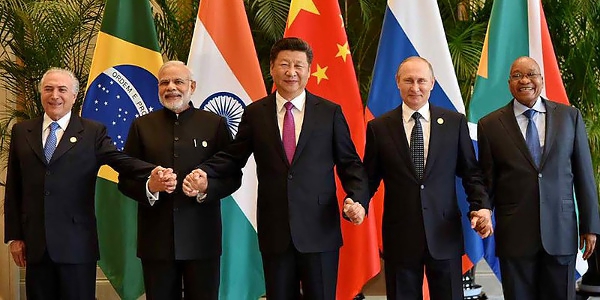 BRICS leaders meet on the sidelines of the G20 in China, 2016. Photo: Narendra Modi

While South Africa has been a permanent member of BRICS since December 2010, China invited Egypt and Kenya to the 9th BRICS Summit held in Xiamen at the beginning of September 2017. Guinean President Alpha Condé, representing the African Union, had the opportunity to attend as well. This means that more African representatives were present during the last summit than was normally the case.

BRICS is another multilateral platform where Africa can interact with other big developing countries to discuss economic issues and cooperation. With South Africa as a permanent member, Africa is not left out of major decisions made by other developing nations. Africa therefore has the opportunity to contribute to the decision-making process, and reap the benefits from the economic cooperation among the BRICS nations.

BRICS and the African continent

BRICS is mainly a group of developing countries and is an acronym to represent Brazil, Russia, India, China and South Africa. It also represents their growing importance within the global economy. While Brazil, Russia and South Africa have been recovering from economic difficulties, China and India are surging ahead with a relatively high growth. According to World Bank data, China grew at 6.9% and 6.7% during 2015 and 2016 respectively, while the economic growth in India was at 8% and 7.1% during that same period of time.

As for the African continent, it has been growing at a relatively fast pace since 2000. Hence South Africa, as the biggest economy within Africa in the early 2000s, was eventually admitted in late 2010 to have better representation with BRICS. Although South Africa has been facing economic headwinds lately, the overall African continent has been expanding steadily.

In 2013, South Africa hosted the BRICS summit in Durban. It will again have this privilege to organise the summit and host all the other BRICS members in Johannesburg in 2018, next year. This will be a great opportunity to focus global attention on South Africa and the continent as a whole.

Moreover, to enhance the South-South cooperation, the Chinese foreign minister, Wang Yi, put forward the idea of “BRICS Plus”, whereby economic cooperation and integration among the main BRICS group can be extended beyond and to other potential countries. Although this initiative is still at its inception, there may be future possibilities of having more African countries joining the BRICS group. Not only will they then have greater opportunities to interlock with the bigger developing countries, but they may also have better access to funding for their economic development.

It was after the global financial crisis in 2008 and during the first 2009 BRIC summit that Brazil, Russia, India and China voiced the need for better cooperation among developing countries, since all the major international financial institutions are controlled by the developed nations. Unable to influence these institutions to support their interests, the then BRIC members discussed having greater recognition and strengthening their relationships.

During the 2012 summit in New Delhi, India mooted and pushed forward the idea of having a common bank to support and fund the economic development and infrastructure needs of the members. Eventually, in 2014, during the sixth summit in Brazil, all five members signed an agreement for the creation of the New Development Bank with a capital of US$100bn. Subsequently, it was agreed that the New Development Bank would be headquartered in Shanghai, China, while Kundapur Vaman Kamath from India was appointed as its president.

In 2016, the New Development Bank had disbursed $1.5bn to fund mainly green projects, like renewable energy generation. For 2017, the bank aims to provide up to $3bn in financing to the member countries. And by 2021, up to $15bn is targeted to be dispensed out on relevant projects. In the future, if other African countries have the possibility to be more involved with the BRICS group, the New Development Bank can be an alternative source for major project financing.

BRICS and China’s engagement with Africa

China is the world’s second-largest economy since 2010. Hence the Chinese leaders are finding that they must be more proactive to shape the global trends for the next stage of its development. It was not until 2012, when the Chinese President Xi Jinping came to power, that China started to be more assertive in global trends and geopolitical issues. This is to preserve its main economic interests and build ties with mutual benefits with all its partners. BRICS is one of the multilateral platforms where China holds talks and engages in dialogue with other countries.

From 2006 till 2016, according to the International Trade Centre, the China-Africa trade increased from $55.4bn to $144.6bn. As for its stock of foreign investments in Africa, it increased from $2.6bn in 2006 to $34.7bn in 2015, according to data from the United Nations Conference on Trade and Development (UNCTAD) and the Chinese National Bureau of Statistics.

South Africa is China’s biggest trade partner in Africa and the biggest recipient of its investments. During the last BRICS summit, Egypt and Kenya were invited. Being China’s third and seventh-largest African trade partners, Egypt and Kenya traded $11bn and $5.7bn in 2016 respectively. This means that not only do other African countries already have a foot in the door through the South African membership, but they are constantly increasing their engagement with BRICS’ biggest member, China.

While Africa was previously mainly a source of natural resources for China, it is now becoming an attractive market for many Chinese companies. Moreover, at government level, China is getting more engaged in Africa’s development by providing financial support and technical know-how to build major infrastructure badly needed on the continent. It also seems that China is willing to have other African countries involved within BRICS.

Africa and the future of BRICS

The developing countries of the world will be the engine for future global growth and there is a need to intensify the South-South cooperation. BRICS is a multilateral platform that Africa can use wisely to engage with the other big emerging economies. With the developed nations turning more inwards, the developing countries will have to turn and look after each other for support. While Africa has currently more significant links with China and India, BRICS provides an avenue for Africa to reach out to Brazil and Russia as well.

The two biggest BRICS members, China and India, have also big plans for the future. In 2013, Chinese President Xi Jinping launched the Belt and Road Initiative (BRI) with major projects in 65 other countries, including Africa. Recently, India collaborated with Japan to create the Asia-Africa Growth Corridor (AAGC). Both plans will only bring positive economic spillovers to Africa.

Overall, what this means for Africa is that while it is facing restrictions from the developed countries, it can now turn to the BRICS platform to engage more with like-minded developing countries. In the long term, this will only benefit the African countries.