Belgian electricity company, Electrawinds, has begun the construction of a wind turbine in the harbour of Coega, near Port Elizabeth, South Africa. 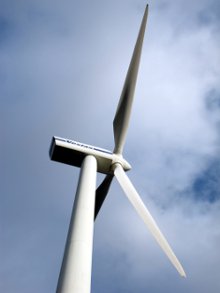 The development marks first commercial wind project in South Africa as well as the start of the first phase of a large wind farm that, in time, will comprise 25 wind turbines. For Electrawinds, this will be the first operational project outside Europe.

The turbine has been built in the Industrial Development Zone (IDZ) in Coega, a new harbour area at the Indian Ocean. It is a VESTAS V90 with a 95 metre tower and a 90 metre rotor diameter. The turbine has a capacity of 1.8 megawatts which translates into an annual yield of 5,700,000 kWh and equals the annual electricity consumption for 1,700 families (based on an average annual consumption of 3,500 kWh).

“We want to invest not only in turbines but also in people. Electrawinds is committed to establishing an education fund for students interested in renewable energy,” says Jan Dewulf, director of business development at Electrawinds.