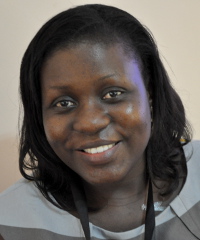 Barbara Birungi, director of Hive Colab and founder of Women in Technology Uganda

This is according to Barbara Birungi, founder of Women in Technology Uganda (WITU), an organisation that trains, mentors and supports women in technology and entrepreneurship.

Birungi, an entrepreneur herself, said she typically walks into business and tech networking functions where 95% of the entrepreneurs are men and 5% are women.

“We need to create role models first and foremost to build up confidence because I think that is one of the key things that stops women from starting up [businesses].”

She added that it is generally more difficult for women to access finance for their entrepreneurial ventures. One reason for this is African traditions where women typically did not own property.

“And when it comes to going to banks to access finance, even if you have a brilliant idea, bankers are thinking, ‘what do you have to give us?’”

While Birungi said this is beginning to change, with more women owning property in Uganda, a large percentage of women are still raised believing that to be a success, they have to be a good wife and mother. This mentality can discourage women at an early age from aspiring to have careers.

“So the [difference between] 20 years of being told how [a women] needs to be so that their husband is pleased with them, to someone else who has 20 years of being told they have to provide – I think that is where the problem starts,” explained Birungi, adding that some parents chose to invest in their son’s education rather than in their daughter’s.

Birungi advises women entrepreneurs to build a network of supporters around them. “Start yourself off with people who believe in what you are trying to do. Before you sell whatever it is you want to sell, first believe in it yourself.”

The role of technology and entrepreneurship

Birungi told How we made it in Africa that increasing the number of women in technology and entrepreneurship not only has the potential to empower women, but affect the social and economic development of Africa too.

She added that governments should start preparing and training Africa’s youthful population to be tech innovators and entrepreneurs at school level because she believes that with globalisation and international business expansion into Africa, the continent’s population will increasingly have to compete with the rest of the world for jobs.

“But what we are preparing our young children, or the generation that is now in school, to be are employees who think nationally instead of globally,” she emphasised.

Birungi is also the executive director of Hive Colab, a tech startup accelerator and incubator for entrepreneurs which aims to build up the local tech capacity in Uganda and East Africa. She said she is looking for entrepreneurs, both men and women, who are committed to an idea, are willing to learn, and are prepared to build and work with a team.

Her advice to Africa’s aspiring entrepreneurs is to look at solving problems in Africa. “There is so much potential that is untapped in Africa. If you just look to your environment, to your community, there are so many problems that you can solve in all sectors in Africa. And if you just sit and think and look at the situations around you – even from an individual perspective, the issues that you are facing – and try and create solutions, then there is a job for everyone. Because I believe that where Africa is going, it’s not going to get better with the job situation. Unless we wake up and become entrepreneurs and innovators, unemployment is going to become much worse,” she warned.

“You don’t even have to go to university… just look, think, use whatever tools are available to you, and create a solution… If no one is employing you, employ yourself and others by creating your own business.”