The global slump in mineral prices has hit Angola hard. Prior to independence, Angola was a major producer of diamonds, iron ore, gold and copper. The government has tried to resurrect production since the end of the 27-year civil war, and one indirect benefit of the fighting is that many of the country’s fabled greenfield sites, potentially some of the best in Africa, remained untouched. As such, since 2002 Angola has become the world’s fifth-largest diamond producer by value. 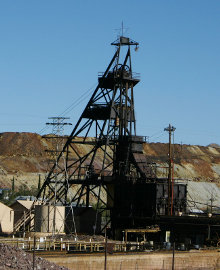 Focus is shifting away from oil and diamonds and onto other minerals.

The fall in mineral demand – particularly for diamonds, the highest mineral earner after oil – has meant producers have had to scale back operations. In January, the government cancelled the World Diamond Summit, due to be held for the first time in Luanda, blaming the financial crisis.

The same month, Russian mining company Alrosa announced it was unlikely to resume exploration at its massive Catoca diamond mine in 2009. Petra Diamonds also announced it was temporarily ceasing exploration, and De Beers slowed investment in its concession in northern Angola.

Recently, shards of light have emerged from the gloom. State-run diamond company Endiama estimates that it will produce at least 7 million carats – and possibly up to 9 million – this year, compared to 8.9 million the previous year, despite Angolan diamond prices falling by 75% in the past 12 months.

Elsewhere, the government has been eager to attract investors in other mineral sectors. Despite the likelihood of large copper deposits close to the borders with the Democratic Republic of Congo and Zambia, there has been little prospecting yet.

Another reason for the lack of investment is the difficulty in finding suitable Angolan partners for mining ventures. “A real constraint on the mining sector is that you need to have strong Angolan partners. That means members of the political elite, which isn’t very big, and they’re largely focused on other extractive sectors like oil and diamonds,” said Edward George, Angola analyst for the Economist Intelligence Unit.

Another problem is infrastructure, although three national railways are due to be working by 2012, which will be “a game-changer”, according to George.

Things are beginning to change on the ground. In September, mining minister Mankenda Ambroise said that iron company Ferrangol will invest US$1 billion over four years to develop the Cassinga project, which also has gold and manganese deposits. In April, Ferrangol entered into a partnership with Antex, a Cuban company, to mine gold from Cassinga. In July, the government mooted a partnership between Ferrangol and South Korean investors who were exploring coal concessions in Cassinga and nickel in the Lubango and Namibe regions.

Smaller companies have been exploring alluvial gold deposits in Cabinda, including a reportedly impressive find by local company Lualica in October.

On the diplomatic stage Angola is trying to leverage its strong mining industry to gain more geopolitical clout. In September, Luanda said it was interested in Venezuelan President Hugo Chávez’s proposal for a cross-continental mining company. Called the ASA Mining Corporation, it is supposed to focus on producing iron and then move to steel.