SABMiller’s managing director for Africa, Mark Bowman, says that many analysts are painting an overly rosy picture of doing business in Africa. 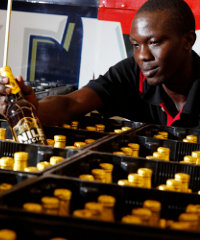 In an interview with Dow Jones Newswires at the recent Consumer Analyst Group of New York conference in Florida, Bowman said that although the continent has significant growth potential, some observers may be overly enthusiastic. He explained that it can be hard for companies to get a foothold in Africa and that there are many challenges to contend with.

The world’s second largest brewer by volume, however, remains positive about its future in Africa. “As [Africa’s] GDP grows and more disposable income becomes available, consumers will move, in droves, from low-end, informal alcohol to highly aspirational lager beer,” he noted in his presentation.

SABMiller currently has managed operations in 18 African countries. In addition, it also has an alliance with French drinks group Castel, which operates in the traditional Francophone territories. The two companies have a cross-shareholding in one another’s businesses and don’t compete in the same markets.

Only 43% of SABMiller’s business in Africa (excluding South Africa) is larger beer, with the balance comprising mostly traditional beer (20%) and soft drinks (36%).

In order to gain and maintain local support and thereby protecting its “licence to trade” in the African countries where it operates, SABMiller has started with a scheme to buy raw materials from domestic farmers.

“We have no competence in farming, and we will not farm ourselves, but we will in essence try and source many more of our ingredients, particularly grains, locally. This has cost benefits but also, and most importantly, protects our licence to trade in the African markets,” Bowman explained.

Historically SABMiller imported 80% of inputs required for the African market, primarily barley from Europe. Bowman said that in Uganda, for example, the company currently has around 16,000 farmers contracted to produce sorghum and barley.

SABMiller is aggressively targeting new African markets and has spent significant sums putting in new capacity. In the last 18 months the company has built breweries in Angola, Mozambique and Tanzania. It has also entered Nigeria, Ethiopia and southern Sudan.

Bowman said that SABMiller knew its investment in southern Sudan was a risky move. “Two and a half years ago we made a somewhat risky decision . . . to invest in southern Sudan because we knew there were quite a lot of beer sales being made there.” Earlier this year the region, with a population of 8.26 million, voted in favour of independence in a referendum that was part of a deal to end decades of conflict between north and south, driven by religious and ethnic divides.

“We are optimistic, it is not easy to do business in Africa, but we’ve been doing it for a long time,” Bowman said in his closing remarks.