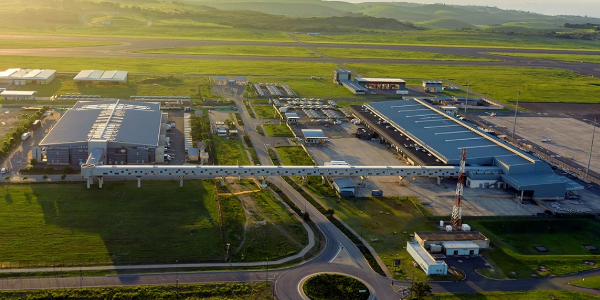 Dube TradePort is taking advantage of its prime location beside Durban on the South African Indian Ocean coastline in a bid to become Africa’s first aerotropolis, connecting business, people and goods to global markets.

Upon completion, this air freight and passenger hub surrounded by industrial and agricultural zones aims to be the continent’s only facility combining an international airport, dedicated cargo terminal, warehousing, trade and agrizone. The ultimate aim is to develop Durban as a major logistics gateway, acting as a seamless road, rail, air and sea platform to serve the subcontinent.

“The backbone of South Africa’s economy relies heavily on transport for the movement of our natural resources,” says Hamish Erskine, CEO of Dube TradePort Corporation. “By investing in transport infrastructure, South Africa is creating efficiencies in its logistics and supply chain management systems, which improve overall competitiveness and the cost of doing business, all in a coordinated effort to spur sustained economic growth.”

Conceptualised more than a decade ago, the history of Dube TradePort stretches back to 1968, when land was expropriated for King Shaka International Airport. Its 3.7km runway currently capable of carrying 7.5 ­million passengers per annum is expected to carry 45 million by 2060 as Dube TradePort expands around it, including road and rail links extended to Durban’s harbour.

“We have seen Dube TradePort, together with the local government, work to attract new airlines flying directly to Durban,” says Ricky Dos Santos, regional head, DHL Global Forwarding South Africa. “With the increase in both regional and international air services directly to and from Durban, Dube TradePort brings efficiency and security to the regional supply chain – especially relevant for time sensitive and high-value consignments.”

Dube TradePort’s lofty ambitions coincide with South Africa finding its previous regional gateway role under increasing pressures. “Our neighbors, who are rapidly expanding their ports and inland road and rail facilities, are replacing South Africa as the gateway to the other Southern African Development Community states,” says Patrick Corbin of the International Chamber of Commerce South Africa.

If Dube TradePort can achieve its goals, however, South Africa could make up for lost ground.

“Dube TradePort strengthens South Africa’s competitiveness by ensuring that the KwaZulu-Natal Province has increased regional air connectivity,” Dos Santos says. “For consolidators this is an advantage as it enables us to offer a direct service to and from Durban to worldwide destinations and origins.”

Durban is currently serviced by Ethiopian Airlines, Qatar Airways, Emirates, Air Namibia and Air Mauritius, with daily feeder services into Zimbabwe, Zambia, Mozambique, Botswana and Namibia as well as every other province within South African borders.

“New international and regional air routes open up new opportunities across a full spectrum of sectors including tourism and leisure, business and commercial, and cargo and manufacturing,” Erskine says.