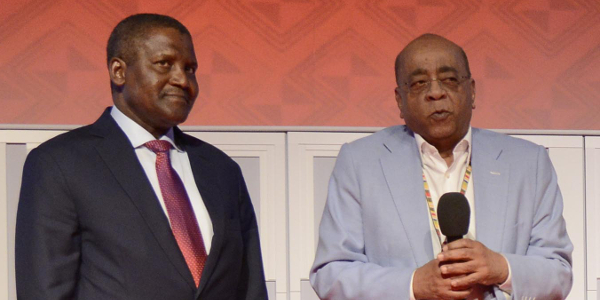 At the recent Ibrahim Governance Weekend in Marrakech, Morocco, prominent political and business leaders convened to debate some of the important issues surrounding Africa’s potential today. Among the speakers was renowned Nigerian businessman Aliko Dangote. He is the CEO and founder of the Dangote Group, which has an annual group turnover of over US$3bn and interests that span cement, agriculture, food processing and real estate across the continent.

At the forum, Dangote noted that there are relatively few African companies that have managed to reach a similar size to the Dangote Group, and he highlighted some of the reasons why he thinks this is.

1. “We are a power company by default”

Dangote started his career by trading local commodities, but grew the business into a large value-adding producer, something few of his peers at the time managed to achieve. He says one of the reasons why so many entrepreneurs in Africa fail is due to insufficient electricity. According to Dangote, companies that want to become large conglomerates, need to generate their own power.

“So you have to run your business and also be a power producer. We now produce over 1,000MW, but we don’t actually sell one single megawatt to anybody. We consume everything ourselves. So technically we are a power company by default – because the power is not readily available.”

He added that of the 14 African markets where Dangote Group operates, there are only two (South Africa and Ethiopia) where the company doesn’t have its own power plant.

2. “There must be some sort of stability in policies”

According to Dangote, inconsistency in government policies both limits local businesses from growing and deters foreign investment. This often occurs when governments frequently change their ministers – and every new minister comes in with policy changes.

“In business, unless you plan there is actually no way you are going to execute.”

Furthermore, he said African politicians typically start vocalising their plans for a country about two years before an election – and many businesses often choose to wait and see the election outcome before making further investments.

“And also, for the foreigners, once we have finished the election, they say ‘let’s wait and see the stability of the government’. And that is what has been going on and on and on.”

3. “We had to now send hundreds of our operators to India”

The dearth of technical skills on the continent is also a major limiting factor for businesses. As Dangote said: “We are lacking in terms of getting people who can run these big businesses that we are setting up.”

For example, Dangote Group’s new oil refinery in Nigeria – capable of producing 650,000 barrels a day – has to send hundreds of its operators to India to learn how to run the facility.

“We have to send about 400 of them to train, not in Nigeria, but in India,” he emphasised.

The group has set up its own academy and is training almost 1,000 people across industries, but according to Dangote, more needs to be done. His solution: public-private partnerships to revive technical training schools.

“It doesn’t mean everyone needs to go get a university degree, you can go to a technical school or vocational centres and learn something.”

4. “The local banks are too small to support our growth”

There is insufficient funding support to grow big businesses in Africa, according to Dangote. He said African capital markets are not deep enough, and local banks often don’t have the confidence or capability to fund big companies.

“Take our own case today. We do have quite a good relationship with some of the international banks like the IFC and AfDB… but [with] the other banks, they’re only interested in taking us to the capital market. If we want to list, they are there… But companies like ours, for example, have actually reached more that their limits because, the way that we are growing, the local banks are too small to support our growth,” he added.

“To grow big businesses, we really don’t have that support.”